I just loaded the stereo and hit Random. The first song to play was John Lennon's oh-so-Beatles-esque tune from Plastic Ono Band: "Look at me – who am I supposed to be?" When he was murdered 25 years ago he was 40 – five years older than I. He seemed to me then, as he seemed to so many, a kind of spiritual older brother. It is strange, listening to this tune, to realize that now I'm 20 years older than he lived to be. There's his photo on Double Fantasy and I think, "Look at you, man – still so young, and just getting a handle on how to be you." I've since learned how to be me, yet John Lennon still has the authority of an older brother. It's good to know that some immaturities never leave us.

I have no interest in mature retrospectives about John Lennon, because when Lennon meant the most to me I was anything but mature – 18 when the Beatles hit the scene; 26 when "Working Class Hero," "Mother," and "Look at Me" struck so deeply; and, when he died, still emotionally much younger than I had a right to be at 35. The night of Lennon's death my late father was just five years older than I am now, and, to my surprise, he called: "Mike, you gotta write about Lennon." "Don't know if I can, Pa." "You gotta. Read the Playboy interview and write about him." I was living in Echo Park, Los Angeles. I got into my car, found the magazine, stayed up all night and wrote a piece for the LA Weekly. It was printed about 25 years ago to the day that this Austin Chronicle hits the stands. The writing is touch-and-go, but it captures the pain fresh – and not only the pain. There's a kind of hope in it, because the youngish man who wrote it was a stranger to resignation. I'm no longer quite that man, and no one my age is a stranger to resignation. So, for all the piece's flaws, I'd rather hear that youngish Mike remember Lennon tonight. That essay is longer than my column space allows, but, truncated some, here it is:

I read the news today, of course, oh boy. Last year there were 21,256 murders in the United States of America. The number, and the percentage, is so staggeringly more than anywhere else in the world that you can't help but think we're at war with each other. The great majority of these people were killed not by burglars or muggers but by people they knew. We are at war with people we know. One broadcast said that what's-his-name – I don't even want to type his name – who killed John Lennon identified so strongly with Lennon that at times he used Lennon's name. He killed himself.

I read the news today. The Playboy interview. There's a lot of very lovely stuff in it. The bravery of a man intent, as Boris Pasternak would have put it, on "keeping life alive" – focusing his gifts on the details of intimacy, and on the fundamental, fecund, essential human unit: a man, woman, and child. Focusing on the exploration of how the members of that unit may combine with each other and with everyone and everything else in this frightening and frightened age.

And there is a lot of pitiful stuff in that interview. It is pitiful to see a man telling strangers what he has not said face-to-face to men whom he has known for 25 years. We are baffled by the people we know.

I read the news today. About a lucky man. The grandiose claims, the stupid exaggerations, made in print by music critics who should know better. What was new to rock & roll in the Beatles' early days was McCartney's music-hall sense of melody, a lilt that no rock melodies had yet achieved. The rest was Everly Brothers changes and harmonies, set to Chuck Berry-ish rhythms, with the brilliant sense of the refrain that soul music got from gospel. Not until Dylan [had] put out all his [early] acoustic albums and gone electric did Lennon and the Beatles write lyrics more profound than "She loves you Yeah Yeah Yeah" (a song I loved) ... Lennon would have been the last to want credit for what he didn't do, and the first to cry out for a sense of human proportion.

Which is what was so impressive about the man. Presley died for his weaknesses; McCartney and Dylan seemed to have enshrined theirs. John Lennon faced his down. It was worth his life to be able to take a walk on a New York street. It was worth his fame and his macho and what other men would call his freedom to be able to bake bread for his kid. It was worth his art to give his love to somebody worthy of his love. (It didn't cost him his art – "Imagine," for one, is a very great song, especially for its melody; to combine lyricism with a solemnity, a profundity of sound, is something McCartney never broke through to on his own. Lennon's love didn't cost him his art, but he risked it.) In addition to being a great artist, he was a great man. He went the distance from being a teenager who beat up on his girlfriends to a 40-year-old who had the courage to register every vulnerability. For integrity, for the pure heart-fire of integrity, the clarity that is the ultimate purpose and gift of integrity, the only public male who can stand with John Lennon is Malcolm X. (Malcolm X who, like John Lennon, was only shot after he had conquered the violence in himself, making speeches about ballots instead of bullets.)

And Lennon was all the greater because integrity did not come naturally to him. Or better say: It did not come first. This was the commercial artist whose manager told him to shut up about Vietnam, and Lennon shut up – until he met Yoko Ono. This was the singer and musician who packed whole stadiums to the rim for top-dollar tickets, and then played a never-changing 20-minute set. Twenty minutes. "The Beatles music died then," I heard him say in a rebroadcast today, "we sold out." Who, by his own testimony, only thought that this was wrong when he realized it was boring.

Then he went to find where he belonged, to search it out through his inners and through a woman who could match his strength. The mystic poet of India, Kabir, wrote hundreds of years ago: "When the Guest is being searched for, it is the intensity of the longing for the Guest that does all the work. Look at me, and you will see a slave of that intensity." Without crediting him with other men's achievements, without making him an icon, those words can stand for John Lennon. Is there anything better to be said about anybody?

But that is John Lennon the man, and that is not enough to account for the common trembling of the heart that is being felt so deeply, by so many, at his death. Not trembling in fear, but trembling with a kind of vulnerability – a vulnerability that hasn't been shared in what seems like a long time. A vulnerability to history, and to each other, and to this tense present. John Lennon's face is superimposed over the Russian armies massing at the border of Poland. John Lennon's face superimposed over the White House. The homage that even heads of state are paying him – but that is really a bad joke, Reagan and the Soviet Union praising Lennon.

It is plainly more than homage to one man. For if most of us had been asked last week what we thought of John Lennon, or if we thought of John Lennon, we'd have spoken with respect, with more or less good wishes, but with a sense of distance, for it has been the better part of a decade since he's been a force in most of our lives. The man for whom it was a deep achievement of humility and courage to go to a restaurant or a movie with his wife; the artist who was so shyly glad that his new record had made the charts, who had been quietly afraid that it wouldn't; the man who had so merged with a woman that on the back of Double Fantasy their faces look uncannily, but uncannily, alike, a male and female embodiment of the same spirit; and in the Playboy interview, a 40-year-old whose wit was still boyish, jaunty, who seemed jaded about nothing at all – no, the world is plainly not garnishing homage to his man as he perceived himself. The homage, a collective emotion, is being paid to something that is itself a collective emotion. Our loss of John Lennon, our loss of innocence, our loss of each other – in sharing the loss, we lost less, we got some of it back.

There is a quiet fierceness to the mourning, and it is a celebration of discarded, discredited values. Values much needed, especially now. Right now. For our hearts have been wrenched, and the feeling is not all bad, not at all. We are coming together in a common memory – even people too young to remember are getting the memory through this, and really feeling it. We're feeling like a family again. [And that is what he wanted.]

And it's too late to worry about the price. 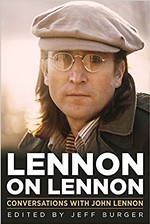