The Famous! King's Inn on the shores of Baffin Bay has been serving crowd-pleasing seafood since 1935 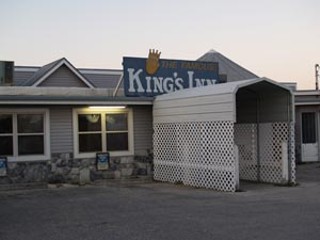 King of the Sea (Photo By Gerald E. McLeod)

The King's Inn outside Riviera at Loyola Beach changed its name to The Famous! King's Inn. The adjustment to the sign made three decades ago wasn't an arrogant move, just a statement of fact. From the Red River to the Rio Grande, Texans who know good seafood know about the eatery on the shores of Baffin Bay.

"My mother really built the business into a legend," says Randy Ware. The 55-year-old grew up in the bay-side restaurant and has been managing the establishment since 1978. "She had a good business head, treated everyone well, provided a quality product, and gave out key rings, calendars, and stuff that kept our name on people's mind," he says.

The key rings, postcards, and other freebies may have reminded visitors from far away of the restaurant, but it was the food that brought them back time and again. Ware says that the shrimp, fish fillets, and oysters are the most popular items on the menu. Much of it is caught fresh out of the bay, which is visible through the screened windows.

Everything is ordered by the pound and comes served family-style along with slices of fresh tomato and french fries. You can order as little as a quarter-pound of one kind of fish, and a pound per person is a full meal. There is no paper menu – the waitstaff recites the night's offerings by memory. The kitchen also prepares steak and chicken on request.

Despite the crisp, white table cloths and the sharp, black-and-white uniforms of the staff, The King's Inn still has the feel of its fish-stand roots. The restaurant started in 1935 as a beachside short-order cafe. The town of Riviera, nine miles up a narrow country road from the water's edge, was supposed to be the gateway to a seaside resort like the French Riviera. Two hurricanes and World War I dampened the dreamed development.

Blanche "Mom" Wright turned the white clapboard cafe into a coastal legend. A war bride from France, Mom Wright hired Randy's parents, Cottle and Faye Ware, to help run the place. They inherited the business when she died in 1945. "My dad was a professional cook," Ware says, a skill he picked up in the Army. Cottle worked in restaurants around the Southwest including a stint at the cafeteria at Texas A&M. "This was supposed to be their retirement," he says. Both of his parents worked at the restaurant until their deaths.

Over the years the recipes have evolved into crowd-pleaser dishes. Some of the food is still cooked like Mom Wright would have done it, some of the methods were brought to the kitchen by Cottle Ware, and other recipes were left by itinerant cooks. "Most of the recipes we don't know where they came from," Ware says.

He is asked most often about the recipe for the tarter sauce that comes with each fish dinner. It's a creamy and spicy concoction that goes with most anything, including the french fries and crackers. Ware says his father started the recipe, and it is more of a seafood sauce than a tarter sauce because it doesn't have pickle relish or chopped onions in it. They used to use chili petines, a very hot pepper that grows wild in the area south of Kingsville and has become hard to find. Now they use serrano peppers, but that is as much of the ingredients as he would divulge.

As the recipes have changed over the years, so has the building. Ware can count at least eight major changes to the structure, not including repairs done after two hurricanes battered the Texas coast. The dance floor has been covered with long rows of tables and the back porch enclosed to increase the seating to more than 300 diners, and still there is often a line of hungry visitors at the door, especially on weekends and holidays.

The King's Inn is about 24 miles south of Kingsville, which includes 9 miles of FM 628 off of U.S. 77. The restaurant opens Tuesday through Saturday from 11am to 10pm. Reservations are advisable, especially on weekends and around holidays. For more information, call 361/297-5265. The staff takes a well-deserved vacation from Christmas Eve to Jan. 2.