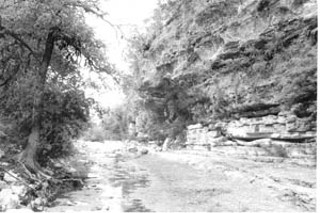 Government Canyon State Natural Area, on the northwestern edge of San Antonio, opened to the public in early October after 12 years in the making. The newest addition to the public lands protects an important piece of the Edwards Aquifer Recharge Zone puzzle as well as giving hikers, mountain bikers, horseback riders, and bird-watchers a beautiful new area to explore. Campers will have to wait at least until next year before the necessary facilities are complete.

It has been a long, hard trail for several environmental and conservation groups to the ribbon-cutting ceremony. A coalition of organizations recognized that the collapse of the savings-and-loan industry in the late 1980s could be the last chance to acquire large sections of undeveloped land during the bankruptcy proceedings.

After a couple of land deals fell through, the coalition found the scenic Government Canyon site three miles off of Loop 1604 in 1993. Using the Austin-based Trust for Public Lands as a broker, the Edwards Aquifer District, San Antonio Water System, and the Friends of Government Canyon raised the money to purchase the initial 4,717 acres of ecologically critical habitat 16 miles from downtown San Antonio.

The land was sold to the Texas Parks and Wildlife Department, which has invested more than $5 million in infrastructure to open the natural area that has expanded to 8,622 acres through additional land purchases. During the last few years, the preserve was opened to the public on a limited basis for special guided tours and volunteer workdays.

At one time a development of more than 20,000 homes and a 36-hole golf course was planned for the former ranch land that straddles the Balcones Fault Zone. Three distinct ecological regions come together in the park. On the northeast is the Blackland Prairie with its rolling fields of tall grass and stands of oak trees. Coming up from the southeast is the mesquite-dominated savannah of South Texas. All of this meets the oak- and juniper-covered Hill Country on the west side of a visible dividing line of the uplift of the Edwards Plateau.

The preserve is named for the old military road that once carried stagecoaches from Fort Government Hill (now known as Fort Sam Houston) to Fredericksburg and on to El Paso. One of the trails climbs a steep hill where it passes the 1880s-era Zizelmann House. The limestone cabin in a field of wildflowers was once a way station for troops and travelers.

Down the other side of the hill are the 80-foot walls of the canyon cut by Government Creek into the layers of limestone. Normally a seasonal creek at best, the stream is fed by springs that emerge from the porous hills. Nearly three-fourths of the new park lies north of the fault line that makes up one of the largest karst preserves in the country, where groundwater seeps into the aquifer through sinkholes, caves, and fractures in the limestone. Since San Antonio is the largest American city whose main water source is an aquifer, protecting the recharge zone is extremely important to thousands of residents.

More than 30 miles of trails wind through the preserve that is more than 10 times larger than New York's Central Park. The diverse habitat is divided into three sections. The relatively flat "front country" is off of the recharge zone and is where most of the natural area's public facilities are located. Pets on leashes are welcome on the multiuse trails, but not in the more sensitive areas. The rugged and scenic "back country" is open to hikers and mountain bikers, and the remote northeast corner is closed to all visitors.

Government Canyon State Natural Area offers exciting new outdoor recreation opportunities. The preserve is open for day use only beginning at 8am on Fridays through Mondays with the back country trails closing at 5pm and the front country trails closing at 6pm. Admission is $6 for adults. The entrance gate is about two hours from South Austin and 3.5 miles off Loop 1604 on Culebra Road (FM 471), then 1.6 miles on Galm Road. For more information, call 830/688-9055 or visit their Web site at www.tpwd.state.tx.us.