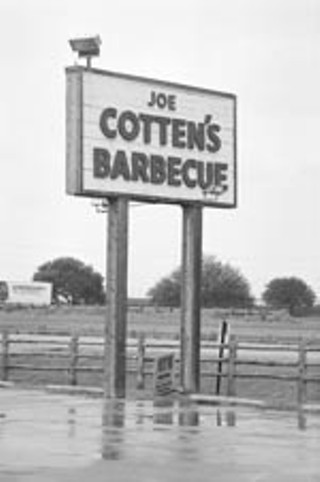 Joe Cotten's Barbecue began selling smoked meats out of a small storefront in downtown Robstown nearly 60 years ago. When you've been smoking that long, "legendary" just doesn't seem to be descriptive enough.

When asked why the staff does something a particular way, night manager Tommy Rodriguez says: "Because that's the way we've always done it. It's tradition."

From the all-male waitstaff to the freezer paper used to deliver the juicy meats to the table instead of plates, this barbecue joint 16 miles west of Corpus Christi is steeped in history that clings to the walls like the art and artifacts that decorated the dining rooms.

Lyndon Johnson, the president who made Texas barbecue haute cuisine, stopped in Robstown whenever he got the chance. George Bush the elder has been by a couple of times and Bush the younger came in when he was governor. "We've had nearly every governor since 1947 eat here at least once," Rodriguez says.

The list of celebrity diners also includes musicians, actors, and athletes. Many stop by on their way to go hunting at the fabled King Ranch, 30 miles south of the restaurant. Rodriguez doesn't have time to name them all, plus he's afraid to leave someone out. Besides, it is the many regulars – businessmen in suits, vaqueros in work boots, and families in Bermuda shorts – who really define the dining tradition that is continued by Joe Cotten's family.

They all stop by for the same reason – the terrific barbecue. Cotten's offers four kinds of meat served three ways. You can get beef brisket, sausage, ribs, or sliced pork. "No birds," Rodriguez says. The meat can be ordered by the pound as a full dinner, on an open sandwich, or in a closed sandwich. The side dishes are limited to pinto beans, potato salad, or green salad; the latter is the newest item on the menu.

In this case, simple dining means simply delicious. The heaping helpings are served on wax paper that Rodriguez says is often incorrectly referred to as butcher paper. Each meal comes with a thick slice of white onion, jalapenos, pickle spears, and half a fresh tomato. The mesquite wood-cooked meat is so flavorful that even the occasional tough slice is a joy to chew into submission.

It could be argued that all Texas barbecue is the product of the Mexican influence on ranch cooking. But nowhere is the Tex-Mex tradition more evident than in Cotten's pinto beans and barbecue sauce, both served in small bowls with the meals. The beans are flavorful enough that you'll be tempted to sip the broth they came in. Accented with bits of onions and peppers, the legumes are taken several levels above ordinary.

The sauce is not your standard, ketchuplike barbecue sauce. This condiment is more of a ranchero sauce that would come over a plate of enchiladas or migas. The chunky mixture could be mistaken for a tangy salsa with bits of tomato, onion, garlic, and peppers. Over thick slices of brisket, the sauce expands the meal to a dining experience.

All of this is served by a waitstaff dressed in a uniform of black slacks, white shirt, and red jacket. The servers are no-nonsense but attentive and helpful. "Some of those guys have been with Cotten's for 40 years or more," Rodriguez says. "I'm one of the babies because I've only been here for 14 years."

Cotten's moved into their "new" building on the highway in 1968. From the inside, it looks like a series of dining rooms added as the business grew, but Rodriguez says the building has only been expanded once. Your belt, however, will need more expansions than that before you make your way back to your car.

Joe Cotten's Barbecue is on the south side of Robstown at 607 US 77 S. The doors are open Tuesday through Saturday, 10am to 10pm. "We have to close on Sunday and Monday because no one would come to work when there is football on the television," Rodriguez says. For more information or to place an order to go, call 361/767-9973.