This week, Stephen slathers it on at a major social-climbing event... 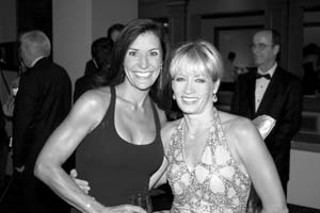 SOCIAL CLIMBING From the moment I received my black invitation to the annual Ballet Austin Fete, Gothic, I knew it would be a high-octane night of glamour and jewelry that would make my greedy little heart go pitter-patter. I arrived at the Paramount with Cliff Redd of the Long Center and Long Center board member Donna Van Fleet (we were gorgeous, of course) and the place was already swimming in champagne, so we dove right in. Co-chair goddess Sara Fox (her charming husband is Nick Fox of Vinson & Elkins) was resplendent in a glittering gold gown … but when is she not resplendent? Jenni Hummel, the other co-chair goddess (her husband is Brad Hummel, CEO of Prime Medical Inc.), was divine in black, and both women ruled the night ("Our swans," as Lance Morgan called them). We were treated to previews of Ballet Austin's upcoming season – breathtaking work by BA's artistic director Stephen Mills, especially the segment of Carmina Burana at the end. What struck me most about the choreography was how modern and sexy it was, and how lucky we are to have Mills among us. We also visited with the enchanting Leanne Raesener, Julia and Evan Smith, BA's Executive Director Cookie Ruiz, a spectacularly radiant Anne Elizabeth Wynn, and Stephen Mills and his partner Brent Hasty. After the performance, we strolled over to the Driskill Hotel for dinner and dancing. Sara, Jenni, and their committee members outdid themselves; sticking to the Gothic theme, the dining room was swathed in deep blood-red fabric and the tables draped in black, each one set with a 5-foot candelabra. As we came in, I was very flattered to have some of the dancers introduce themselves to me. There was Reginald Harris, Matthew Cotter, Orlando Canova, and a couple of other ones whose names escape me (one was so handsome I think I drooled on his shirt). Cliff and I were honored to sit at the table of the delicious and delightful Deborah Green (still waters run deep with this lady) and her multitalented escort, Clayton Aynesworth, the highly sought-after yoga instructor (among so many of his pursuits); along with the beautiful Chris Mattsson and John McHale (Deborah and Chris were the co-chair goddesses of this year's festivities at the fabulous Texas Film Hall of Fame awards ceremony); the director and chief curator of the Austin Museum of Art, Dana Friis-Hansen, and partner Mark Holzbach of Zebra Imaging; and Don Mullins and John Livingston. We visited with my NBF (Next Best Friend) XL Editor Michael Barnes, AISD Superintendent Pat Forgione, the relentlessly energetic BA board members Julie Thornton and Suzanne Lewellyn-Moore (accompanied by entertainer Stuart Moulton), Paula Damore of Austin Lyric Opera, Steve Adler, Terry Irion, Bruce Todd, Elizabeth Christian, and Joanie Bentzin. Bay-bee, I was in social climber's heaven.

BENEFITING On Saturday, Oct. 1, our great friend Carolyn Farb of Houston is chairing a show stopping benefit, the One Country Concert, to benefit the survivors of Hurricane Katrina. Held at Houston's Reliant Stadium, the star-studded event features George Strait, Kenny Chesney, Alan Jackson, Willie Nelson, ZZ Top, and Martina McBride, and others. Go to www.onecountryconcert.org for further info… Also on the benefit front, the always entertaining and delightful La Cage: Vegas in Austin presents a special show on Monday, Sept. 26, 9pm to help raise money for the Katrina relief efforts and anticipated Hurricane Rita relief needs. This one-night-only show will be at the Rainbow Cattle Company, 305 W. Fifth. Call 472-5288 for further information.