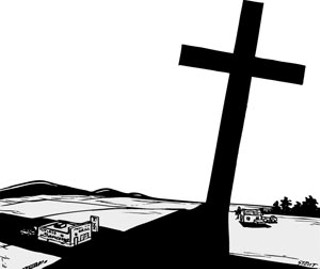 On I-40 you drive past Groom, Texas, in seconds – a tiny town barely managing to be a town anymore, like many of its kind, clinging to the highway for dear life. Just west of Groom stands the second-highest cross in our hemisphere (there's one slightly larger in Illinois). Its massive, shiny metal glints in the sun, 19 stories high, visible for miles in that flat land. One may wonder whether something so large is a monument to faith or to unadmitted doubt, or some of both; but one may be sure that nothing so expensive is created in a county so poor without deep need. This is thunderstorm country. On many nights Groom's cross must be lit and struck by lightning like the lightning announcing Yahweh's presence in Exodus 19:16 – a light-show counterpointed quickly in 20:21, where Moses draws near "to the thick darkness where God was." The vast plains of the Texas Panhandle are an apt setting to depict the lights and darks of the divine.

Surrounding the Groom monument in a wide oval are refreshingly, earnestly human statues: the Stations of the Cross. Groom's Jesus is Anglo, not Palestinian, shorter than today's average height but taller than Jesus likely was. (The Gospels never suggest his appearance was unusual, so his height was likely average for the time, about five feet.) Groom's cross dwarfs us, but its statues silently convey what feels almost like an appeal: "See, we were much like you; it isn't so hard to understand our sins, our faith, and our sufferings, not if you look into yourselves."

Day and night there are always a dozen or so trucks and cars in the parking lot and people looking up at the high cross and, more accessibly, into the eyes of the statues. I am neither Christian nor anything else, but I revere Jesus as a teacher and as a fighter for the poor – for Jesus, like other Jewish prophets, distinguishes himself from Buddha, Lao Tzu, and the great Islamic mystics by his absolute insistence that the poor and destitute be included in his Kingdom (or, as Caroline Casey says, his "kin-dom"). I find these humble statues a sweet relief from the bombast that passes for public Christianity these days. There are some wise Christians in Groom, Texas, who have not forgotten the Nazarene's humility and humanity.

Their stone memorial of the Ten Commandments proves it. Let's be generous and call it an oddity that the American conception of the Ten Commandments excludes the two Jesus insisted were most important. Plaques, plates, and T-shirts all over our country display the familiar thou-shalt-nots. But in Groom, near the huge cross, the American Ten are inscribed in stone and then, beneath them, we read the answer Jesus gave when asked (Matthew 22:36-40), "Teacher, what is the great commandment in the law?" He answered, "You shall love the Lord your God with all your heart, and with all your soul, and with all your mind. This is the great and first commandment. And a second is like it, You shall love your neighbor as yourself. On these two commandments depend all the law and the prophets."

Interesting: Jesus is quoting from Deuteronomy 6:5 and Leviticus 19:18, but neither passage includes the phrase "with all your mind." That's his addition. He wanted the mind to be involved. He wanted us to think. In any case, the American Ten exclude the love of God and the love of neighbor, though Jesus said clearly that all else rests upon such love, and to love our neighbor "is like" loving God. To underline the point, his last public teaching in Matthew (24:35-40) states without ambiguity that if you have not cared for the poor, the ill, the stranger, and the imprisoned, then you are no friend of his. "As you did it to one of the least of these my brethren, you did it to me. ... As you did it not to one of the least of these, you did not do it to me."

In light of this, when people call the United States "a Christian country" one can see a Jesus very much as he's depicted in Groom, saying humbly and in great pain, as he says in Luke 6:46, "Why do you call me Lord, Lord, and not do what I tell you?"

On I-27, not far north of Lubbock, on the southern edge of Abernathy – another town of mostly empty storefronts – is another, stranger Jesus. Constructed beside St. Isidore Catholic Church (Isidore was a fifth-century Egyptian ascetic), a narrow two-story structure fronted by glass displays a crucified Jesus of terrific proportions who leans far out from his cross like the figurehead on the prow of a sailing ship. Carved in the grotesque yet beautiful style of Mexican icons, this Jesus bears a peasant's face of no specific ethnicity, but universally peasant, with dark reddish-brown hair, light eyes, and bad teeth – a strangely disturbing detail, those teeth. Imagine the Sermon on the Mount delivered not by the handsome Anglo Jesus of the movies, but by a broad-faced peasant with bad teeth. Would we listen as attentively?

The structure is open night and day; you can light candles, and there are scraps of paper on which you may write prayer requests to be honored at the next Mass. This time of year the air is thick and hot in that high narrow room. You stand at Jesus' bloody feet. You look up, and his pained eyes look straight down into yours, as he looms over you so that you imagine for a moment he may fall upon and crush you. That, certainly, is the Jesus of my childhood, the Jesus the nuns and priests dinned into us – not a teacher but a sufferer, who suffered (they said) for me (though I hadn't asked him to), and to whom I therefore owed a debt (which I'd never agreed to). Yet I have always honored the unflinching endurance of that sufferer. It is no small thing for a religion, or for anything, to teach you to endure.

There's an iron stairway up each side of his cross, and the point seems to be that you walk up one stair, pass in the space between Jesus and the cross, and down the other stair – a ritual I've not heard of, perhaps original to Abernathy, Texas. On the right stair is a small sign: "I, Your Christo de Mi Paso, Ask You to Promise a Change of Life Before Going Up and Passing Through." That sounds like Jesus. To be a true supplicant you must promise to change. Change what? That's not specified. Which is what I admire about this depiction: The nature of the change is up to us.

At night this Jesus is brightly lit. Driving at 70 miles per hour on I-27 (old U.S. 87, which is, as Terry Allen sings, "that hard-assed Amarillo highway"), suddenly you see this terrible and terrifying Sufferer out of the corner of your eye. You pass in an instant, wondering did you see it or not, and what did you see? Perhaps that night you return there in your dreams.

Then there's the Jesus on Texas Route 114, some 25 miles west of Lubbock, not far past the Wal-Mart as you're coming into Levelland. At St. Michael's Catholic Church, fronting a large parking lot, stands a metal crucifixion maybe two stories high. Again, the Jesus is not generic. The face, hands, and feet are poorly done, but the arms, chest, and thighs are beautifully suggestive of a pained, strained body. Guano streaks his shoulders and chest, implying the birds and flies that no doubt tormented anyone crucified. The oddest thing is that, yesterday, sticking out of each nostril was a long strand of straw. The work of birds, kids, the wind? A stone's throw down the road is the Mean Woman Grill, where Miz Ayn serves excellent hamburgers and sings the blues, a cafe fronted by suggestive metal cut-outs of dancing women. Straw up Jesus' nostrils, sexy dancing gals – a Texas Panhandle collage. Texans have told me that Panhandle religion drums two lessons into its young: 1) Jesus loves you, and he'll send you straight to hell; 2) sex is filthy, dirty, sinful, and you must save it for the one you love. Welcome to Levelland.

And welcome to Clarendon, on U.S. 287, some 60 miles southeast of Amarillo. West of the highway, but not in its sight, on graveled Leroy Street, a sign tells: "Welcome/The Silent Teacher/Prayer Walks and Healing Walks/Meditations/Encounters." (Encounters? I'm interested.) No pictorial depictions, but a captivating park of crosses and stones arranged in unusual ways over maybe an acre of land. One cross is tipped on its side. There's a gate in the middle of the field. Stairs to a white platform. A sunken bench where you sit at ground level to view the upright cross. Chairs here and there. At night, solar-cell-lights glow without glare, illuminating gently. You know it's a special place, but you don't know what it is. It took much work and strength to move these stones, build these crosses. Everything seems unfinished, but so are you unfinished. "The Silent Teacher." I thought of something St. Francis is supposed to have said: "Preach the Gospel at all times. If necessary, use words." Only if necessary. Silence and example teach better, and so does the wind. Wind blows all the time in Clarendon, where this place seems to say as Jesus did (Luke 17:21), "The Kingdom of God is within you."