Your Style Avatar gets all rock & roll on yo' ass this week! Word! 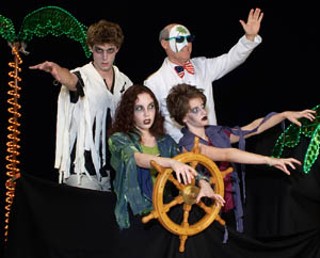 Do not miss local legend David Perkoff's annual Love Boat extravaganza, in which he performs his character, Captain Helmut Von Hagendassen, as a riotous combination of Captain Stubing, the Phantom of the Opera, and Dr. Frank N. Furter, along with a cast of teenaged zombies, Kerry Awn, and Stuart Moulton as Paris Hilton. The show runs Aug. 4-6 at Esther's Follies. See for further info.

OVERHEARD: On SoCo "Being ill-informed is the new black."

IX-NAY ON INXS: Have we all watched the horror known as Rock Star: INXS? Let's say it together: Eeewww. To put this ridiculous show in perspective, the handsome and talented INXS lead singer Michael Hutchence tragically died in 1997 after 15 years of cranking out hits. (Was it suicide? An auto-erotic mishap?) The remaining group of able musicians was immediately relegated to obscurity. Then, some eight years later, from out of the sunset came a rapidly aging band desperately in need of a lead singer to help them out of the gaping maw threatening to permanently engulf them.

What nobody involved in this mess seems to get is that Michael Hutchence was INXS. Without him, the remaining members had no identification of their own. It's sort of like the Crickets trying to replace Buddy Holly. And then someone thought this would make a great television show.

You can just hear some producer's lackey thinking, "What a great concept! ... But, wait, who would watch it? Hmmm … it seems to be missing something. I know! Let's get some other second string has-been and have him host the show to give those no-name guys some cred! Let's see, who could we get? Justin Timberlake? Nah – too young and too has-been. Bobby Brown? No, he's got his own nightmare of a show … Michael Bolton? No, the hair has always been a problem. I know! Let's get that dwarfish gay-looking guy that used to be in the Red Hot Chili People and Jane's Addiction! You know, the one married to blow-up doll Carmen Electra?!" And so that must be how we arrived at Dave Navarro as host for a show about INXS.

The contestants come in many forms, some less repellent than others. There are some truly talented people on this show – people who have actually been performing for some time. Males and females alike, they all fall into easily identifiable categories, some of which include: the white-people-with-dreadlocks element; the black-people-with-mohawks element; the Mick-Jagger-is-God element; and the yes-I-look-like-a-Playboy-model-but-erroneously-believe-I-can-rock-with-the-best-of-them element.

There have been several of the female contestants (we have so much respect for them we're going to just call them "babes") who have appeared in little more than a bathing suit top. I think of singers like this as "bra singers" since that's what you look at when they're singing. One Tri Delt even came out and sang "Purple Haze." Only a lobotomy will remove that image from my mind. The other image that's impossible to forget is the image of Dave Navarro and the unknowns smirking and drooling as the babes undulate before them in leather pants. This would be fine if we had a single ounce of belief that INXS would be interested in hiring a female lead singer. But that seems about as likely as Lindsay Lohan winning Best Actress for Herbie: Fully Loaded. I think it must be really hard to look like you're interested in women when you sit back preening like a fashion model with your fur coat pulled up around your face, framing your hair-so-perfect-it-looks-like-extensions, your dangling earrings, eyeliner, and your creative, George Michael-ish facial hair surrounding your pursed lips – but Navarro achieves that perfectly. He gets a lascivious glint in his eyes as he tells the babes, "You've really improved since last week," but regardless of what his actual words are, it always sounds like "Come on up front here and sit on Uncle Davy's lap."

The male contestants, one of whom will probably win, are dismissed with a perfunctory "You rock, dude." But none of the contestants let this smarminess stand in their way. They are about to achieve international stardom! What reality show contestants seem to never understand is that by the time the show is over, we are over them. Like American Idol, for instance. Is anyone really interested in what happens to these people after they win? No! The really smart ones know that being on the show is the best they're ever going to do before returning to the hotel lounge circuit (if they're lucky).

Frankly, why bother to pick through the contestants at all? If the remainders of INXS are that close to Dave Navarro, why don't they hire him to be their lead singer? Then they can all continue their descent into obscurity together.