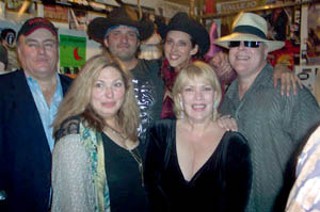 A FAMILY AFFAIR: Last Friday was the final show of the series for Antone's 30th Anniversary party. If I weren't so vain about getting older, then I'd admit that I'd been to Antone's legendary first location on Sixth Street 30 years ago. I'm much too vain to admit that. However, the allure of celebrating Antone's birthday and seeing Patricia Vonne perform was irresistible. I knew my illustrious Sister Margaret, an integral part of Antone's history, would have already reserved the best table in the VIP "skybox," so I insisted on horning in. Of course, that meant I had to share Margaret with her new beau, guitarist "Burnin" Mike Vernon – and when Margaret has a new beau, well, everyone else is just toast. Fortunately, I was able to visit with my good friends Blake and Lea Buffington, who, accompanied by the beautiful Amanda Pryor, were also guests in the skybox. Patricia was faaabulous. Better than I'd ever seen her. She is the total package: beauty, brains, talent, and style. It's only a matter of time before the rest of the world figures it out. After she played (I clapped so hard my jewelry hurt), Mayor Will Wynn, who does such great work in supporting our local music scene, took the stage and proclaimed it to be Antone's 30th Anniversary Day in Austin. Regretfully we had another engagement and could not stay for Del Castillo, but on our way out, the backstage area was a party all its own. As we congratulated Patricia on her knockout performance, I realized I was in the middle of a wonderful photo opportunity: There was Patricia with her brother, director Robert Rodriguez; the venerable Susan Antone and her brother, the venerable Clifford Antone; and, of course, Sister Margaret and me. It was all in the family.

PARTY POOP: My sister handed me the invitation saying, "David Cotton wants you to come to his party. He said to tell him if you can't make it, and he'll change the date." Well, that's flattering. So, of course I went (but my sister didn't – when David found out she wasn't there, he threatened to turn off the music and make everyone go home). Monsieur Cotton, my dear, old friend who books the music for the Saxon Pub (among so many of his activities), co-hosted an excellent party with another dear, old friend, KXAN's weatherman Jim Spencer, at Threadgill's last weekend. I insisted my current "walker" and NBF (New Best Friend) Cliff Redd of the Long Center escort me. We loved it. From the abundance of media stars (Mr. Spencer, RJ Da Silva, Michelle Valles, Laura Skirde, Chris Champion, Kevin Connor, Kevin Phinney, Chris Gray, Seabrook Jones, and others) to music bigwigs and stars (Clifford Antone, Michael Clay, Dan Dyer, Nancy Fly, and Francis Preve, among so many others) to assorted Pretty Young Things of both sexes, it was truly memorable. I think I loved meeting Todd Potter of Bubble Puppy best – though I'm only a couple of years younger, I very nearly embarrassed both of us by sliding into that "I loved you when I was a child" routine. Also had a terrific time dishing the dirt with Tim Hamblin, video archivist for the Austin History Center. He's married to that fab PR powerhouse Jo Rae Di Menno. When Cliff and I first pulled into Threadgill's, he said, "Do you think the party's indoors?" But, hearing the dance music blaring from the patio told us everything we needed to know. In fact, aside from how weird it was to hear techno at Threadgill's, the music was superb, and DJ Chris Allen (www.djchrisallen.com) may be my favorite new DJ in town. Great hosts, great music, great guest-list, great party. Thanks, guys!

RANDOM SHOTS: Seen the pictures of the so-called Boho Chic look, as espoused by the twin Olsen creatures? The only statement that makes is "I've run out of my medication!" Every time I go to HEB, the product I'd most like to find isn't available: choke chains for children. The person that manufactures those will win the Nobel Peace Prize... "Giving props." Where the hell did this stupid phrase come from? It's rivaled in its idiocy only by "my bad." A recent online discussion speculated as to what the headline of Madonna's obituary would read. My favorite? "La Isla Finita." It's just a Bed, Bath & Beyoncé world. Shocked by the concept of "trophy wives?" How 'bout the new concept of "starter marriages?" They used to call Montgomery Clift "PTM." Today, they'd say, "Hung like a light switch." The new line of high-carb, low-nutrition food is called Betty Cracker. J/K, of course. Since the laws against sodomy have been taken off the books, please note that it is no longer politically correct to refer to anyone by the name "Sodomite." Instead, those persons with a predilection toward such practices are heretofore to be addressed as "patrons of the arse." (We'll "give props" to Ken Lieck for that one.) The rest is silence.