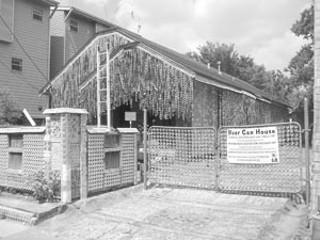 The Beer Can House stands out in the quiet West Houston neighborhood like a belly dancer at a black-tie ball. Dwarfed on two sides by towering condominiums, the working-class bungalow hides behind a curtain of beer-can tops and bottoms that twist and rattle in the Gulf Coast breeze like a veil.

Earlier this year, the Orange Show Center for Visionary Art announced that they have received a grant from the Houston Endowment to restore and preserve the creative work of John Milkovisch. "The house is a work of architecture and a work of art," says Susanne Theis, executive director of the Orange Show, which purchased the house in 2001 from the creator's family.

Milkovisch was an upholsterer for the Southern Pacific railroad who died in 1988 at the age of 75. Over a period of nearly 20 years, in the days before curbside recycling, he built fences, a mailbox, planters, and decorations around the house using beer cans. Instead of traditional aluminum siding, he used, you guessed it – flattened beer cans.

Theis says that for Milkovisch, who grew up in the neighborhood during the Depression, the home-decorating project was more a matter of "waste not, want not" than it was an attempt to call attention to himself. Milkovisch often shrugged off the artistic value of the house by saying he covered the house in beer cans so he wouldn't have to paint.

After he retired, Milkovisch began filling in first the back yard and then the front yard with concrete blocks that he inlaid with patterns using marbles, rocks, or pieces of metal because he was tired of mowing the lawn. Much of the luster of his handiwork has been dulled by time and hidden by the shadow of the tall buildings on either side of the house.

Using more than 50,000 beer cans, he meticulously made streamers, mobiles, and arches. The curtain of beer-can tops and bottoms actually had the practical purpose of shading the front porch. Theis says that Milkovisch made the sculpture for his own enjoyment, but his craftsmanship sets it apart from other home-improvement projects. The son of a furniture refinisher, Milkovisch also built beautiful cabinets for the house.

"The inside of the house was Mary's domain," Theis says. When Theis visited the Milkovisch home before John died, it was decorated in a style she calls "fussy meticulous." Mary collected Fabergé eggs of every size and kept the house neat and orderly. "It was a museum of early Sixties decor," Theis says.

But the retired railroad employee and his wife also had a wicked sense of humor. He cut letters out of beer cans that he nailed to wooden planters and then snickered when sightseers tried to figure out what they meant. Theis says Milkovisch and his wife had a pipe with a fake faucet on it that they would stick in the front yard or take to the beach with them. "Then they would get a kick out of it when people would try to get water out of it," she says.

Even though it is more than 60 years old, the structure is in remarkably good condition. Much of Milkovisch's work has been lost or is deteriorating. The steel wire used to connect the can parts is rusting, and the thin aluminum is beginning to oxidize.

Fortunately, the folk-art foundation has more than 2,500 photographs documenting the project from family albums and professional photographers. "We'll get a condition report and then do a triage on what has to be fixed first," Theis says. Work will begin on the house this summer, and it should be open to small tours by this fall.

The Beer Can House is still a marvelous sight from the street. The aluminum-decorated house is west of downtown Houston, two blocks north of Memorial Boulevard, and one block east of Wescott Drive at 222 Malone St. For directions to other folk-art sites around Houston, call the Orange Show at 713/926-6368 or download a map from their Web site at www.orangeshow.org.