What a week! Stephen revels in the tacky, the tawdry, and the out-and-out terrible when it comes to fashion. Better luck next week, dear Avatar! 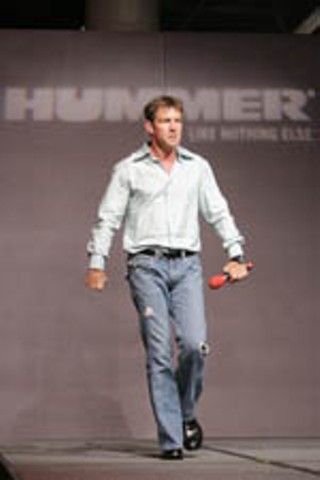 The charming Mr. Quaid camping it up on the runway following the Lights, Camera ... Fashion 3 show last weekend (Photo By Tim Sharp)

THE BIG SHOW The Dennis Quaid Charity Weekend is an amazing undertaking. Mr. Quaid's dazzling career has made him one of America's most generous and beloved stars. We are fortunate to have him and his beautiful wife, Kimberly, as Austin residents. Kimberly's brother Blake Buffington and his wife, the lovely Lea (among my favorite new friends), had me as their guest to Lights, Camera … Fashion 3, one event in a series that weekend. My good friend Cliff Redd, exec director of the Long Center, accompanied me, and we sat with Dennis' group with another good friend, Tisa Bean, head colorist at the swank Jacques Dessange Salon. Criticizing anything about a charity event is always a dicey proposition, but the bottom line is that if it raises money for the intended charity, then it must be considered a success. I've criticized charity fashion shows before and been mercilessly criticized in return; someone involved is always aghast that I would say anything bad about a production because, "It's for charity!" or "It's for the children!" or "It's for sick people!" But it's not the charity that I criticize, only the production. The clothes were from Giada, which predictably featured an endless parade of garishly colored nightmarish designs festooned with cheap beading from India, replete with male models ripping off their shirts in a mall-like version of Chippendale's. We agreed with our good friend Stephanie Coultress, co-owner of the chic new store Estilo, which opens next week in the Second Street District, who remarked that the show could have used less fashion and more style. To add insult to injury, we were subjected to the antics of a child named Little C, who won the dubious title of America's Most Talented Kid on some long forgotten television show when he was 7. Now he's 9. I wasn't exactly clear what the talent was, whether it was gymnastics or lip-synching, but I'll try and describe the irony of this child, who comes out on the runway to the tune of Michael Jackson's "Billie Jean," imitates a number of Michael Jackson's moves (including the moonwalk), and then basically begins to disrobe, exposing his bare torso and chest. Am I really the only one who thought it was inappropriate at best to have a virtually half-naked 9-year-old grabbing his crotch and dancing to Michael Jackson music? On the other hand, I'm not the target audience … and the target audience seemed to love the show. What was amazing was the sheer number of attendees the event drew. When we walked into the lobby there was an enormous crowd of people. Miles of them. People I'd never seen before. People of every description. I don't think I've ever been to a charity event that attracted as many younger people – by that I mean teenagers and their admirers – ever here in Austin. It was jaw-dropping. At $75 a ticket. This event must have raised a fortune – the entire weekend raised more than $300,000 for four children's charities. The glamorous new PR whiz on the block, Patricia Paredes, and her company PR Works did a great job in marketing this, and I'm sure that between the Sharks concert, the golf classic, the Starry, Starry, Night event and the Don Felder concert, Mr. Quaid made the four charities very happy – and the charities, in turn, will make a lot of children happy. That's the point of the whole thing, and Quaid and company seem to have succeeded brilliantly.

VIEW KVUE?: One longtime KVUE viewer, Kevin Houston, questioned the appropriateness of an accessory news anchor Olga Campos wore on the air, and in an e-mail response, Campos in essence told Mr. Houston he was free to change channels if he didn't like it. It appears that on Campos' 5pm broadcast of June 8, she was wearing a very large crucifix. In his e-mail to me, Mr. Houston amusingly referred to it as "life-sized" and "Crusades-approved" but admitted that it was perhaps 3 inches by 4 inches – sizable enough that, according to Mr. Houston, the religious symbol ("or at least the size of it") was "offensive, distracting and well, tacky." Identifying himself as a fellow Christian and addressing his concerns to KVUE's news director, Houston's e-mail was apparently turned over to Campos herself, who responded to Mr. Houston by denying any religious significance to the crucifix. "Sir," wrote Campos, "The necklace you find 'offensive, distracting and well, tacky' was a birthday gift from a childhood friend. I share this with you so that you will understand the necklace was not worn as a reflection of my religious beliefs, but was chosen because it was a gift from a dear friend, and it just happened to go with the outfit I was wearing … We are thankful to live in a nation where we have the freedom to make personal choices: What jewelry to wear – and what television station to watch."