Two Parises for Popov, a pink limousine for Stephen, and a little praise for Anthony-Nak 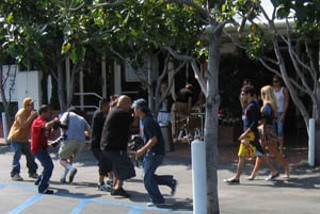 Heiress Paris and her boy toy Paris Latsis (r), engulfed by a swarm of paparazzi at Fred Segal in L.A. (Photo By Thomas Popov)

PARIS X 2 Said FactoryPeople's Le Popov, "Thomas and I were at market in L.A. and had dropped by Fred Segal to pick up lunch on our way to the airport last Sunday [June 12] when suddenly a Range Rover appeared and Paris Hilton and fiancé Paris Latsis jumped out amid a swarm of paparazzi." Pandemonium ensued as P2 walked into the cafe, cameras flashing like crazy, and then they went over to the women's side of the store and did the same thing. "She looked amazing," said Popov. "The longest extensions, the highest heels. They apparently weren't at the store to shop at all but just on some sort of PR junket." Popov said the L.A. market was great and that they found fabulous denim for fall. Go to www.factorypeople.com and see their great lineup of events for the Father's Day weekend.

TICKLED PINK I have always been a staunch believer that black is the only color for a limousine ... but that was until I rode in a pink one. Ever since I'd heard about it, I'd wanted to try it for myself – a big pink limo tricked out with the best accoutrements with the ultimate in services designed for "women and the men who love them." Then I met Ballet Austin board member Forrest Preece, who knew the owner, so he arranged for us to meet. Owned by Jenny Roan (along with her mother, Vicki, who owns the Menagerie, a swank West Austin institution for jewelry and gifts), Pink Car (877-PINKCAR, www.pinkcar.net) is a luxury limousine service "designed for women [and men] who appreciate a higher than average level of service." The fleet, which, in addition to the limo, has a pink Cadillac Escalade and Lincoln Town Car, offers airport service, sightseeing, local travel as well as travel between cities, and personalized service for spa days or shopping days ... or whatever you want. Jenny volunteered to put the car at our disposal for our nightly rounds, so we picked an especially busy night and invited Jenny, Forrest, and his wife, Linda Ball, to join us, along with my good friends Rita Garza, Miss Kitty, and her husband, Zach Garrison. It's hard to understand the effect of this big pink limo until you see it – it's just so over-the-top and so fun that I can't imagine anyone wouldn't enjoy it. But when it pulled up in front of the Four Seasons, we piled in, ready for adventure. The chauffeur was a dark-haired Amazonian beauty in head-to-toe pink, natch, and as an example of Pink Car's executive service, there was a pink rose for each of us (I felt like I was The Bachelor), as well as fine chocolates. Everything we could have wanted to drink was available, from pink lemonade to pink champagne and everything in between, along with all the local publications (well, all the good ones, anyway). Our first stop was the fabulous "American Music" exhibition of Annie Leibovitz's work at the Austin Museum of Art. Do not miss this art event. The work is stunning – sometimes haunting or disturbing and sometimes joyous and sublime – but always breathtaking. I was especially intrigued when AMOA PR Director David Wyatt showed us how to dial a phone number on our cell phones and enter codes that were posted under each piece of work, allowing us to listen to Annie or the photograph's subject talk about a photo while we looked at it. Retiring to the Cedar Street Courtyard, we listened to crooner Kevin Ahart (www.kevinahart.com) and his band play in the late afternoon sun. It was kind of special watching him. He's so handsome and young; it was one of those times when you feel glad to be seeing someone early in their career because you know they're going to become one of the most well-respected entertainers who will be around a long time. We decided on dinner at the South Congress Cafe – I'm beginning to feel like a regular there, but I just love everything about the place. It looks cool, the food is always great, and the service is always good. What else could you need? As an after-dinner treat, our good friend David Cotton at the Saxon Pub invited us to be his guests and hear Bob Schneider play. We held court in the back room and visited with Matt the Electrician and KGSR's Kevin Connor. Sixth Street be damned, I'd rather hear live music at the Saxon any time. As the witching hour approached, we returned to the Four Seasons for a nightcap. Upon reviewing the night, we had more than a good time ... in fact, we were tickled pink.

BRAVO! Huge congratulations to Austin's own Anthony-Nak jewelers for winning fashion's equivalent of an Oscar: the Swarovski's Perry Ellis Award for Emerging Talent Accessory Design from the Council of Fashion Designers of America.

TONIGHT! TONIGHT! June 16-19 is the Dennis Quaid Charity Weekend (www.quaidcharityweekend.com), featuring an array of star-studded events, beginning tonight (Thursday) with a concert by Dennis Quaid & the Sharks at La Zona Rosa, and continuing through the weekend with a splashy fashion show and party presented by Hummer on Friday, the Dennis Quaid Celebrity Golf Classic also on Friday, and a Starry Night party and auction on Saturday featuring a concert by Don Felder of the Eagles. All info is on the Web site.