Is '5 x 7' big enough for your Style Avatar? And is Brigitte Bardot old enough? 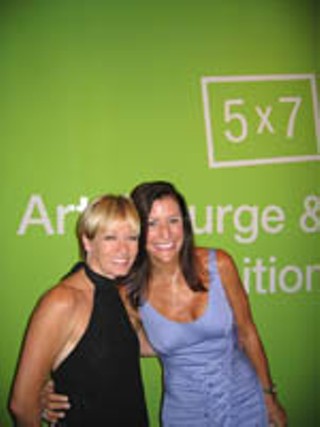 5X7: I would have been surprised if I hadn't loved the Arthouse's "5x7 Art Splurge and Exhibition" last week, because what's not to love? Not the hundreds and hundreds of pieces of art for sale (each 5 inches by 7 inches) nor the marvelous guest list. In attendance that evening were the vivacious Deborah Green, Sara Fox, Jenni Hummel, Nathanial and Elizabeth Chapin, Evan Voyles, Steve Wyman, and Emily Cowart, Matthew & Katy Culmo, Brian Bowers, Daryl and Dana Kunik, Lance Morgan, Taylor Andrews, Phil Hudson, and so many more of what the Austin American-Statesman calls the Fortunate 500. Certainly not the beautiful flora by the always fabulous Big Red Sun (btw, did you see their fab spread in Metropolitan Home?). The catering by Ranch 616 (I loved those steak shooter-things)? The music by DJ extraordinaire Faith Gay? Finally, clearly not the referee services provided by the Texas Rollergirls (see their upcoming events at www.txrollergirls.com). While each separate factor was wonderful, the combination was an unforgettable evening of fun and art and one of the best benefits in town.

SLUDGE REPORT: I think I understand now – whenever Bush's approval rating dips below 35, Cheney has been instructed to fly his Cessna into restricted airspace… From Michael Musto's column in the Village Voice (www.villagevoice.com/nyclife/516,musto,63132,15.html): "This is probably not the right time to bring up that Broadway star who mowed over a child in an unfortunate accident and now has to sit onstage every night and listen to the line, 'You're in a good mood. Did you run over a child today?'" Well, the line is from Steel Magnolias, and could Musto be referring to Rebecca Gayheart, who pled guilty to manslaughter charges in 2001?… Brangelina. There, it's been said. Now we'll never have to say "Brad and Angelina" again… And now, with no introduction necessary, we present www.blackpeopleloveus.com... Don't you love how Nicole Richie is trying so hard to gussy herself up now that Paris has dumped her? Trading one skank for another, Hilton wants Rod Stewart's daughter Kimberly to be her new best friend… Here, a particularly wretched photo of Britney Spears that raises more questions than it answers: www.myvillage.com/photos/bad_hair_day7.htm. Remember how beautiful Brigitte Bardot used to be? That was a long time ago. Now she's as ugly on the outside (www.gossiplist.com/blog2/archives/006172.html) as she is on the inside; in her most recent book, A Cry in the Silence, the ancient sex kitten aired her distaste for modern gay men, because they "jiggle their bottoms, put their little fingers in the air, and with their little castrato voices moan about what those ghastly heteros put them through." That's nothing compared to what she's been through – just look at her!... And speaking of wretched, there's Entertainment Tonight's Mary Hart, the fossilized commentator whose desperate attempts at being hip are laughable considering she's careening headlong into 60. Listening to her gush over the contrived Tom Cruise/Katie Holmes alliance is a nauseating estrogen-fest…

MILESTONES: Now that my darling Sister Margaret is reliving her glory days (or is it a second childhood?) as Party Girl No. 1, it was only fitting that her birthday party be held at the Broken Spoke, where Margaret has lately reinvented herself as the Sweetheart of the Rodeo. Serenaded by Alvin Crow and his band, guests including that other brother/sister act Clifford and Susan Antone, Mike Hall of Texas Monthly, Mandy Mercier, Chip Taylor, Carrie Rodriguez, Pinetop Perkins, Billy Dee, Neil Kaiser, Earl Poole Ball, Burnin' Mike Vernon, Cindy Cashdollar, Elana Fremerman, John Platania, and Speedy Sparks.

FALL FETE: I can hardly wait for Ballet Austin's Fete 2005 in September! It's a long way off, and I know I'll be there, but if you want to go, you'd better look into it PDQ, because they're selling out fast. Co-chaired by the aforementioned Sara Fox and Jenni Hummel, the theme this time is Gothic (not to be confused with goth), a romantic and dramatic approach for Ballet Austin's season opener, Carmina Burana, which is based on poetry written by 13th-century defrocked monks on their views on love, lust, debauchery – you know, generally exploring the human condition. The evening will begin at the Paramount with cocktails and a very modern, sexy, high-energy gala performance, followed by dinner and dancing at the Driskill Hotel. Black-black-black tie! If interested, tables can be purchased by contacting Nicole Hensley, special events coordinator at Ballet Austin at 476-9151 x124 or nicole.hensley@balletaustin.org.