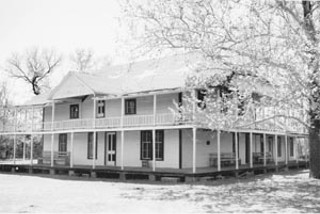 Quanah Parker walked the stony road from nomadic Plains Indian to successful cattle rancher. The era of the Comanches' claim to the western half of Texas came to an end 130 years ago on June 2, when Quanah and his band of warriors agreed to settle on a reservation.

The trail of the last Comanche war chief's life winds through Texas like a well-worn buffalo path. The story begins in what is now Limestone County, where the Parker clan built a log fort. A month after Texas won independence at the Battle of San Jacinto, 9-year-old Cynthia Ann Parker and four others were captured and five were killed by a Comanche raiding party on May 19, 1836.

To the Comanche, the isolated settlements were tempting targets for plunder and revenge. The Texans struck back with raids of their own and recaptured Cynthia Ann in 1860. She had three children – sons Quanah and Pecos and daughter Topsannah (Prairie Flower). She would never see her Indian family again.

Quanah was born sometime between 1845 and 1852 in the Wichita Mountains of Oklahoma. By the time he was 13 years old he was participating in raids on North Texas, and by 18 he was leading his own war parties.

The Comanches controlled the vast grass lands and buffalo herds of West Texas until the end of the Civil War. Returning veterans came to Texas looking for cheap land with military skills and firepower honed on the battlefields. In 1871, Gen. William T. Sherman sent Col. Ranald S. Mackenzie to the Texas Panhandle to remove the Indians to reservations in Oklahoma.

Quanah and the Quahadis fought a running battle with MacKenzie beginning in Blanco Canyon on the eastern edge of the Caprock. The two armies fought skirmishes over hundreds of miles of the Llano Estacado with the Indians led by Quanah disappearing and reappearing in the vast countryside. Although the Indians were never caught they had lost their safe haven.

Once a favorite camping ground of the Comanche, Blanco Canyon runs 30 miles along the White River northeast of Lubbock from near Floydada almost to Crosbyton. Highways U.S. 62 and FM 651 offer spectacular views of the gorge.

It was at the Second Battle of Adobe Walls that Quanah gained lasting fame for his bravery. Disgusted by the white hunters' practice of skinning the buffalo and leaving the carcass, Quanah's band attacked a camp in northern Hutchinson County, which included a young Bat Masterson. The two sides fought to a draw, but it was the beginning of the end for the Plains Indian.

The battle site is now an archeological dig conducted by the Panhandle-Plains Museum in Canyon and is open only by special tour. The museum offers exhibits on the Native Americans of the area including the Comanche. Relics from the era can also be seen 12 miles east of the museum at Palo Duro Canyon State Park. For information, call 806/651-2244 or go to www.panhandleplains.org.

On June 2, 1875, Quanah and the remnants of his band rode into Fort Sill, Okla., to accept the Army's peace proposal. The Comanche's 480,000-acre reservation in southwestern Oklahoma was dissolved in 1901. Leading his people to accept the white man's ways, Quanah became a rich man by working with the Texas cattlemen that he once fought. His house in Cache, Okla., sported large stars on the roof to signify his rank among the Indians. He died of an apparent heart attack in 1911.

The decaying mansion is open to visitors by appointment only (580/429-3238). Cynthia Ann and Prairie Flower were reinterred at the cemetery in Cache and later moved to Fort Sill along with Quanah's grave.

The town of Quanah, northwest of Wichita Falls, was named after the chief whose mother was recaptured just a few miles south of the courthouse where a monument honors her son. A mural dedicated to the last great Comanche chief graces the wall of the post office.