Making the fashion scene with Your Style Avatar, Mr. Stephen McMillan Moser, it's hard to imagine when he has time to worship at the altar of Trinity Broadcasting Network... but he does. Hallelujah! 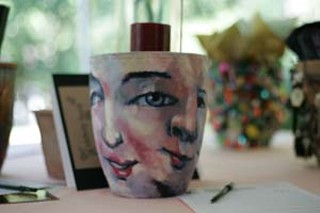 RANDOM THOUGHTS: "A dresser has been brought in for the business of the daily dressing of Michael Jackson," said a Jackson source to the New York Daily News. "You have to remember Michael Jackson is not used to making daily public appearances. This is a real challenge to come up with an outfit every day." Yeah, I know, having to dress yourself every day is cruel and unusual punishment… Of course you'll want to look into the new Evolution by Margarita bra; it provides a desperately needed public service by making you look like you have breast implants even when you don't… The results are in: On AOL, 74,000 children between the ages of 6 and 12 have voted for whom they think would be Coolest Mom. The winner is Jessica Simpson in first place, followed by Jennifer Lopez, Gwen Stefani, and Britney Spears in last place. These frightening results illustrate why we don't let children vote until they're 18… From Cindy Adams' column: "You know what they call Washington, D.C.? The work-free drug place."… Presumably with a straight face, US Weekly presented something called the Young Hot Hollywood Style Awards, starring Jessica Simpson, Jessica Alba, Nicole Richie (combined age, 73), and John Stamos, 42. If 42 is now young and John Stamos is now hot, our future is dim, indeed. Be afraid… I guess that George W. Bush's hunt for Osama bin Laden is going as well as O.J. Simpson's hunt for Nicole Brown's killer…

THE LATE SHOW: I've discovered true delight in the middle of the night: the Trinity Broadcasting Network, which broadcasts turgid biblical dramas without interruption. I happened to be flipping through the usual arid network desert of late-night talk shows and infomercials, when suddenly my screen was filled with the lurid Technicolor posturings of David and Bathsheba starring Gregory Peck and Susan Hayward. Peck does his best as David, who can't keep it in his pants. Amazingly, Hayward illustrates how to bear children without gaining an inch. Full of soggy dialogue and eye-popping cinematography, any relationship to the Bible is in name only. Surely accuracy is not a top priority for TBN? Another night, they showed Solomon and Sheba with Yul Brenner (with hair) and Gina Lollobrigida (clearly wearing Revlon's Matching Lips and Fingertips in the popular Fire and Ice color). Brenner replaced Tyrone Power, who died during the filming of this, but I'm sure he felt there was no other way to get out of this ridiculously overwrought (yet so plush!) Old Testament drama. Though exactly where the Queen of Sheba bought her 1950s couture in the time of the Pharaohs remains a mystery, all cynicism ends when Sheba converts and the crowds call poor Sheba a "pagan slut," then try stoning her to death. Fortunately ol' Solomon returns just in time for Sheba to make a deal with God that if he spares Solomon's life, she will return to her own country and the spawn of their lust will rule Sheba. Surely there's a lesson there … if only I could find it.

SOCIAL DIARY: Jewelers to the stars Anthony Nak hosted a reception for architect MJ Neal (www.mjneal.com) at their MJ Neal-designed store on Brazos. The store, of course, is gorgeous, creating a strong yet peaceful presence that understands it is designed to show off jewelry, yet is loaded with the same razor-sharp edge with which Neal imbues all his designs. Neal's glamorous and vivacious wife, Viviane Vives, producer and star of the award-winning indie film Dear Pillow (www.dearpillow.com), was also present. She and I both raved about the good works done by the Austin Film Society, which helped finance the film… We left there to go to the Umlauf Sculpture Garden Party, a very well-attended benefit for the Umlauf Sculpture Garden and Museum. I don't know why I haven't dragged myself out of my chair to attend this before; they've always been so kind about inviting me, so I swore I'd go this year. Now that I have, I have to say that this event ranks as one of the most beautiful parties I've ever been to. The sculpture garden itself is a jewel box of beauty, with Charles Umlauf's works tucked in among the trees, ponds, and bridges. Using tiny lights and torches, the organizers, chaired by Laura Merritt, created a magical setting along the trails, and 20 of Austin's finest restaurants offered delicious food and wine, as the Nash Hernandez Orchestra serenaded. Honorary Chair Anne Elizabeth Wynn was in attendance; she dresses so beautifully that I now have two fashion icons to look up to in Austin. The highlight of the event is the auction of pots decorated by such Austin luminaries as Evan Smith, Kathy Womack, Mr. Fabulous, Toni Price, the Gourds, and the gorgeous and glorious Sara Hickman.