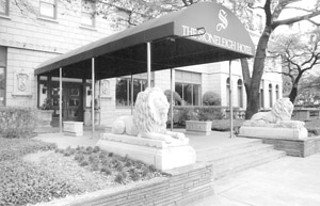 The Stoneleigh Hotel in Dallas was described as "a bit threadbare" by a business associate of mine. We were traveling on expense accounts and opted for a pricier "luxury-boutique" hotel a few blocks away, and I hated it.

A few months later I was back in Dallas and decided to try the Stoneleigh, and I loved it. OK, I liked it with qualifiers.

The first qualifier is that I have a bias for old hotels. There is something about them that puts me in an old F. Scott Fitzgerald novel. The place only has to exhibit a hint of the Roaring Twenties, because that's when a lot of Texas' luxury hotels were built, for me to feel the spirits. Don't get me wrong; I'm not claiming to be clairvoyant, just a little weird.

The second qualifier is that my imagination can conjure up a hotel much better than reality. Old hotels can easily lose their character during remodeling, like the hotel where I first stayed. On the other hand, old hotels can appear threadbare if the remodeling doesn't go far enough or isn't done often enough, like the Stoneleigh.

The 11-story hotel was built in 1923 as an apartment building for the wealthy and near wealthy. Originally called the Stoneleigh Court Apartment Hotel, its top floor was at one time occupied by the owner, who had hidden doors and secret passageways installed for the servants to disappear behind. For a short period of time, it was the tallest building in Dallas.

At a time when a standard hotel room rented for $2 a night, the Stoneleigh charged $85 a month for an apartment and $55 a month for a bachelor (efficiency) apartment. It also provided guests with air-conditioning, maid service, a dining room, and garage.

By 1925, Dallas was the economic center of the Southwest. With a population of approximately 265,000, the city was the largest spot cotton market in the world and one of the six largest insurance centers in the country. The jazz era soon gave way to the Great Depression, and the Stoneleigh went through a succession of owners – one Dallas family owned the property for nearly 50 years. Over the years, the hotel has been modernized without changing its character.

The hotel entrance is in the back of the building, giving the feeling of entering a private world. The bellhop was helpful, although he didn't know there was a hike and bike trail in Turtle Creek Greenbelt two blocks away.

The lobby harkens back to the days of grand hotels with marble pillars and polished wood trim. I was smitten by the ambience even though the young lady at the front desk was slow and couldn't find the reservation I had made over the Internet a week earlier.

For $10 more than I had recently paid for a suite at an international chain hotel, my room was twice as large. It was actually three rooms – a living room, a bedroom, and a kitchen with a dining area. I could see this as a perfect place to have a poker party without the wife complaining about the cigar smoke.

For a business or vacation trip, the former apartment gave me plenty of room to spread out. The refrigerator was great to store my leftovers and refreshments, but a microwave would have been more useful than the gas stove. The king-size bed was comfortable for a hotel bed, and, in my corner room, I didn't have the problem with noisy neighbors that some guests have complained about. Not having a thermostat in the room was a problem. The location in the Uptown neighborhood put the hotel near downtown and the American Airlines Center, and the McKinney Avenue Trolley is a short walk away.

The building's current New York owners are planning to remodel the hotel and add condominiums in the vacant lot east of the hotel. Even though there are many things that could be improved, it will be interesting to return in a couple of years to see if the old hotel has lost its character.