Who is the Best Fashion Writer? Just ask the Saxon Pub! See inside for more details. 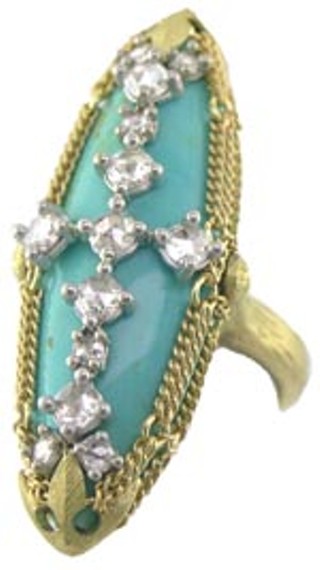 WORDS OF THE WEEK: "We will own that Beatles catalog in no time." – Quoted from a Bank of America executive in Ted Casablanca's "Awful Truth" column regarding the $350 million in loans that Michael Jackson took out using the Beatles catalog of songs as collateral.

SAXONY: And a very happy 10th anniversary to the Saxon Pub (1320 S. Lamar), one of my favorite music venues – especially now that, during their recent South Austin Music Awards, they awarded me the honor of being Fashion Writer of the Year – in a ceremony that I was absent from (not to mention completely unaware of, though I suspect the fine hand of the charming David Cotton here). Of course, I would have attended had I known; it would have been an exceptional opportunity for a very special outfit, big jewelry, and a grand entrance. Perhaps I could have arrived having traveled down South Lamar on the back of a flatbed truck, wearing an ermine-trimmed gold satin flight suit under a banner saying "Mission Accomplished" … or maybe that's exactly what the good folks at the Saxon were afraid of? Instead they left a lovely certificate, suitable for framing, in my mailbox at work. Thanks y'all, but I will be there next year (if not sooner).

EASTER SERVICES: All week long I've heard about the hordes of pilgrims descending on the Vatican for Easter. I keep thinking, pilgrims? At the Vatican? Of course, pilgrims are primarily visible during Thanksgiving, though I never really thought about what they might do the rest of the year – maybe little bus trips or what have you – but the thought of thousands and thousands of them at the Vatican raises many questions: Is it a Million Pilgrim March sort of thing? Have they got a message for the Pope (better hurry!)? Did the pilgrims get there the same way they got here? I haven't seen photos, but I can just imagine how festive everyone was in their bibs and tall hats with buckles.

BANGLES AND BAUBLES: I attended the unveiling of the new Anthony Nak jewelry collection. This group includes rings, which I have never seen them do before. This jewelry is not only the most beautiful work these guys have produced, it is among the most beautiful jewelry in the world. I do not say that lightly, since I've made it a point to see some of the most magnificent jewelry on earth, by Verdura, Cartier, and Harry Winston, among others. The jewels are so distinctively designed, incorporating not only classic AN detailing, but new techniques and treatments. At a party for the recent Texas Film Hall of Fame, AN's Nak Armstrong invited Marcia Gay Harden to drop by their showroom the morning of the awards, and that night, she was wearing a spectacular custom-designed bracelet to go with her brilliant orange Cynthia Steffe gown. Also in attendance were the splendidly talented Jerry Kunz (HGTV was just here shooting a segment on a loft space Jerry decorated); Stephanie Coultress and Cami Cobb of Estilo (opening soon in the Second Street District); the gloriously expectant Amy Weaver; and the wickedly entertaining James Rowley of Vën Shoe Salon (who has just opened a satellite location inside Wardrobe).

GREAT ESCAPE: Looking for a place to get away from all the music and madness? Go to www.laserp.com/fun_stuff/escape_neverland.htm and play Escape From Neverland, in which you can help Michael Jackson capture errant little boys who try to flee the ranch.

JUST DO IT: This Saturday, April 2, 9am, is the 2005 Mighty Texas Dogwalk, starting and finishing at the Tony Burger Center, 4701 Hwy. 290 W. in Sunset Valley. As a benefit for the nonprofit Texas Hearing & Service Dogs, the organization hopes to set the world record with this three-mile event for the largest dog-walk, beating England's record of 5,017 dogs. To donate, volunteer, or walk, go to www.servicedogs.org… This Thursday and Friday, 11am-6pm, and Saturday, 11am-5pm, the wonderful Bella Home (1221 W. Sixth) is having a floor sample sale.

BITCH-EEE From PopBitch.com: The Queen has sent Camilla Parker Bowles a nice present to say sorry for not attending her wedding: a trip to Paris with a car and chauffeur...