Our Style Avatar and yours, SMM is the man about town this week. See where he's been seen and with whom! 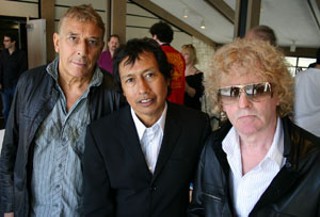 OUT It was one of the most exclusive shows during SXSW – about 75 of us watching the KGSR live broadcast of sets by John Cale and Alejandro Escovedo, Ian Hunter and Canada's Kathleen Edwards. Alejandro's music is the music of angels – hauntingly beautiful and completely unforgettable. And when Cale performs Leonard Cohen's "Hallelujah" with him, you know you can die happy having been blessed to hear sheer perfection and true magic. My eternal valentine, Patricia Vonne, was there with the relentlessly energetic Mickey Mann – when my sister bumped me out of the car so she could drive Monsieur Cale back downtown, I went to Patricia and Mickey to beg for a ride. Patricia promptly abducted me to ride back with her on the party bus. A party bus. Quick arithmetic told me I was about 25 years too old for anything that could be remotely described as a "party bus", but, well, I'd go anywhere Patricia told me. I quickly tried to locate a roadie jacket and some quaaludes, feeling sure that they would make me very popular on a "party bus," but fortunately it wasn't necessary. It was a party bus deluxe, with the interior painted red, blue, turquoise, purple, and black, trimmed with coordinated vinyl seats, feather trim, spinning disco lights, a bar, a CD/DVD player, and karaoke machine. The music was so loud I couldn't hear anybody's names (or maybe the quaaludes were kicking in), but I will say it was also completely unforgettable and a thoroughly novel approach to inner-city travel. I did jump off at the first stop (no, not the liquor store) feeling sure KGSR had a thing or two to teach Capital Metro about public transportation. More people would take the bus if more busses were like these. Party on. And I made that up about the quaaludes. I don't even know what they are. 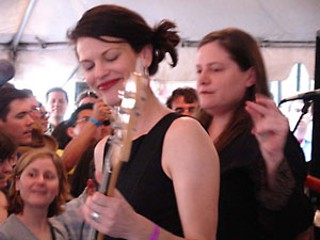 SUNDANCING II An exec of Luxottica/Ray-Ban eyewear, Peggy Fries, was here scoping SXSW out for future promotions. Needless to say, I staked her out at the Hilton and forced her, practically at gunpoint, to show me the new collection. And I can tell you this – these aren't your father's Wayfarers. Go to www.rayban.com and see for yourself.

INSTANT MESSAGE Is everyone on earth talking about the films Cowboy Del Amor and Troop 1500? Or is it just everyone in Austin???

RED RIVER VALLEY The German band Electrocute drew a crowd at Elysium that was wrapped around the building all night (I could have used a bit more eyeliner and another piercing)… Old Haunts and Two Ton Boa from Washington state were at Beerland – as they say in Washington state, it's the water… I saw the Adored at Red Eyed Fly… VHS or Beta at Stubb's (dang, why didn't I buy a hoodie at Old Navy like everyone else here?)… and Judah Bauer at Club de Ville – so-called alt-country that you'd never guess was from New York.

TODAY The booksigning today at Factory People (1325 S. Congress Ave., 2-4pm) by legendary British rock photographer Mick Rock is a benefit for longtime Austin music scenester Brenda Hutchison. There is an eBay auction also in conjunction with the benefit that will launch over the weekend and last for three-to-four weeks. Brenda's boyfriend, Mark Newman, is the sound engineer for Blondie and the Black Crowes, who, along with many friends of theirs, have donated cool rock & roll memorabilia such as: a signed drumhead, drumsticks, set lists, and T-shirts from Blondie's recently completed Australia tour; signed drumhead and set list from the Black Crowes (the first collectible/autographed items from the newly reformed lineup, the set list is from their first "secret" show since re-forming – in Pittston, Pa., last Monday); autographed poster of enlarged/poster-size original lyric sheet/CD artwork from R.E.M.; signed drumhead, T-shirts and more from the Wallflowers; and a special surprise package from Lenny Kaye and Patti Smith. Some of the donated items will be displayed today. Sign in and bid high.