Stephen gears up for the celebrity onslaught by skewering more ... celebrities! 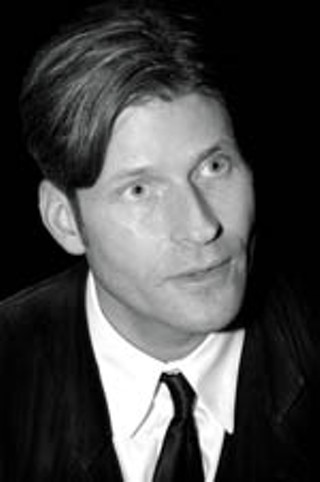 The enigmatic Crispin Glover, cornered by photographer Bob Sherman at the Downtown Alamo Drafthouse during the showing of Glover's What Is It? (Photo By Bob Sherman)

WORDS OF THE WEEK: During London's Fashion Week, glamazon Naomi Campbell was overheard describing her fellow supermodel Eva Herzigova as "That fanny-licking, smelly, council-digging, pasty peroxide chavess of a Latvian anorexic prostitute." The New York Post, which reported the item, graciously pointed out that Herzigova is Czech, not Latvian.

SCHADENFREUDE: Well, I devoured the book Front Row: Anna Wintour: The Hot Life and Cool Times of Vogue's Editor-in-Chief by Jerry Oppenheimer, about the diabolic editor of Vogue. Oppenheimer crucifies his victims, practically nailing them to the wall like the mother in Carrie. He made mincemeat of Martha Stewart in Just Desserts, and filleted Ethel Kennedy in his wicked and cruel The Other Mrs. Kennedy. He is no more merciful to Anna. The fact of the matter is that Anna Wintour is a brilliantly talented and creative editor, and her rise to power was no different than any man's, but as a female – one with ice water in her veins, no less – she is vilified by the press. Yes, we know The Devil Wears Prada was a very cute roman à clef about working as an assistant to Anna, but the double-barreled approach of this new book leaves the reader gasping for breath. The contradiction for me is that while I can thoroughly enjoy reading books like this, if it involved me personally, I might feel differently. While reading the book, my jaw dropped when I realized that Anna Wintour's cousin is Austin's deeply talented singer-songwriter Eliza Gilkyson. I wrote the brilliant Eliza immediately, even before finishing the book, and said, "I can't believe you're related to the Devil herself!" I referred to Wintour as "the Wicked Witch of New York." Eliza wrote back and said that what was even wickeder was that a relative of hers was in a relationship with Oppenheimer, the author of "the catty book," and went on to say, "If you quote me as saying anything, I would prefer it would be about that scumbag, who misrepresented himself to our family. Even though Anna is obviously an unhappy person, I would never willingly disclose info about her or any family member for a fucking journalist whore like Oppenheimer. He told us he was writing a book about the Wintour family, publishing magnates [Anna's father, Charles, was the longtime editor of the influential London newspaper the Evening Standard], blah blah, and we all fell for it, and somehow he weaseled these asides out of us, in passing, about Anna. Boy were we duped." Take that, Mr. Oppenheimer.

READY FOR MY CLOSE-UP: Your beloved Style Avatar will be making his big-screen debut at SXSW in a mockumentary by Marci Winters-Allen, Queer Eye for the Austin Guy. We filmed this last summer as part of an auction package for the Texas Film Hall of Fame, in which the package winner was made over by me, of course, and my partner-in-crime, interior designer Joel Mozersky. The mockumentary follows us as we zip around in a Carey limousine and wreak havoc at the chic By George, Bella Salon, the fabulous Napa Home, Paper & Ink, Grape Vine Market, and our victim, Dreux LaViolette's home. Personally, I have not seen this film yet. I'm desperately afraid I'll come off as Edna Turnblad in Hairspray and ruin my chances of becoming a movie goddess. Screenings will be at the Reel Women in Film showcase, Sunday, March 13, at 6:30pm and Monday, March 14, at 8:30pm at the Hideout.

MUSIC FROM AFAR: Our good friend publicist Jo Rae DiMenno alerted us to the three bands from Helsinki that she is promoting for Grandpop Records & Warner/Chappel Music at SXSW. The Latebirds (www.latebirds.com/news.php3) will play Saturday, March 19, at Cedar Street Courtyard, 8pm; Laika & the Cosmonauts (www.laikaandthecosmonauts.com/press) will play Wednesday, March 16, at the Drink, 1am; and Nieminen & Litmanen (www.grandpop.net) will play Saturday, March 19, at the Elephant Room, 315 Congress, 11:30pm. And you can write or call Jo Rae (236-0969, hardpressed@austin.rr.com) to find out about the dozen French bands and 75-plus Canadian bands she'll be working with during SXSW... Speaking of waaay too many to be discussing, BMI's always lovely Hanna Pantle has arranged some of the most kickass showcases for our delight. She did great work last year and this year looks every bit as festive. Grab your calendar and go to www.bmi.com/sxsw... And, well, for a different kind of music entirely, Xtreme Nightclub, inside of Sidekicks (110 E. Riverside, 804-2707), continues its La Cage: Vegas in Austin series on Sunday, March 13. Benefiting Project Transitions, the place will rock with some fab female-impersonators, including special guest Amber Nixx, who, as Bette Midler and Madonna, will be knockin' 'em dead. For further info, call or go to www.sidekicksaustin.com.