Twenty years ago the woman I was married to intercepted a review copy I'd received of a new Los Angeles novelist. She devoured the book; when it was my turn to read it she said something like, "This guy is good. Really good." The book was Days Between Stations, Steve Erickson's first published novel. In my review I wrote, "Erickson is brilliant. Period." I also wrote that the only limits to what Steve Erickson might accomplish would be imposed by his character, for his gifts and his intellect were capable of greatness. Later, Steve and I met; over time, our friendship deepened. We became brothers-in-the-craft, comrades in the capital-"C" Chaos.

After the crackup of my marriage I moved into an apartment building in West Hollywood that had once been a hotel built by a movie studio in 1932 to house its starlets. From its rooftop you could see miles and miles of L.A. After Steve's first marriage ended, he took an apartment there too. He lived on the third floor; I lived on the third, then the first, then the third again, then the forth. We shared the building with an exotic bouquet of L.A. types. An actress on the second floor played one of the witches on Buffy the Vampire Slayer; when she wasn't a witch she was, in her own words, "a warrior for Christ." On the third floor lived a sometime Marilyn Monroe imitator, sometime comedienne, and full-time masseuse. A quick-to-anger Czech painter-actress lived on the first; she painted murals all over the halls. For a time the building was managed by a guy whose prize possession was a portrait of a mass murderer that he kept in his closet – hidden so as not to frighten his dates (or not to warn them). And there was a gay guy who supposedly was invited to any orgy that Madonna supposedly organized, and a dark diminutive lesbian who had a tempestuous off-and-on affair with the sexually ambiguous Marilyn comedienne-masseuse. Everybody but Steve was writing screenplays. More people were awake at midnight than at noon, herb smells drifted through the halls, and sexual crises and climaxes might be heard through the walls (or from the roof) at any time. There were also ghosts. Any building in which Steve and I were the sanest renters would naturally harbor ghosts.

That building appears in Steve's novels as the Hotel Hamblin. I'm here to tell Steve's readers that you might think he's exaggerating about the Hamblin, but, no, he's simply transformed its contexts; he's not exaggerating about its inhabitants.

I've appeared in Steve's books too, by name. (I'm afraid he didn't exaggerate about me either.) He appeared in my last published novel, not by name. Which is to say: Our friendship crossed the line from life to fiction; we became a part of each other's creations, which gives us each a special stake in the worth and fate of each other's work. But in what I'm about to say concerning his most recent books, remember what I wrote before I met him: "Erickson is brilliant. Period."

Reading Steve's last book, The Sea Came in at Midnight, I knew he'd broken through to another level of fiction. His characters had an immediacy, an authority, an integrity in the relationship of voice to action found only in the finest novels. A shining moon-glow passion radiated off each page, as though the book itself, quite apart from its writer, engaged the reader in a passionate and dangerous relationship in which everything is at stake. That novel, its characters and situations, sets up the new novel, published this month: Our Ecstatic Days. (You can read Our Ecstatic Days without having read The Sea Came in at Midnight – but why deny yourself the adventure of the first voice of the duet?)

Our Ecstatic Days is that rarest of creatures: a great novel. The first great American novel of the 21st century. What is the last novel I would unequivocally call great? Arundhati Roy's The God of Small Things. The last American great novel? I don't want to start literary fights, so let's just say I'd have to go back a long way – decades – to find anything that approximates the achievement of Our Ecstatic Days. Its pages turn themselves because Erickson has discovered the secret of creating a novel that is not a book but an organism. Proust did it. Joyce almost did it. Faulkner sometimes did it. Marquez did it. Yes, that's the company Steve's keeping in Our Ecstatic Days.

Let me be clear. This isn't a book review. This is a testimonial. I'm not about to summarize the story, and anyway, it defies linear summary, for this book enters into the core of capital-"M" Metaphor – Metaphor as a psychic reality that connects and binds all outer and inner realities. A sentence such as "She smells the dreams like wet ash upon the mattress" is set in a context that makes it not a sweet line of surreal poetry but a practical description of a real moment. In a surreal poem you dig but don't understand the line; in Steve's book you know exactly what it means. Steve works in labyrinths of metaphor. For instance: "Glowing melody-snakes that each sing their own song, swarms of them singing cacophonously in an apocalyptic lake that laps at the walls of The Hamblin" – and as I read I'm certain I too saw/heard them when I lived there, and that's weird, and I write in the margin: "How does he conceive these things? We've known each other 20 years and I have no idea. He never discusses it, I never ask."

The incredible leaps of form that Steve accomplishes ... the passion that shines from every page ... the psychic links he makes between the Tiananmen massacre and 9/11 ... and it's so fucking primal, it's about love and God and chaos on the most primal of levels: the love of parents for their children, and the need of children for their parents. Things don't get more primal than that. In BookForum some ninny reviewer

(who praised the book!)

summarized the message of Our Ecstatic Days as "Lord, protect my child." But may it not be said that "Lord, protect my child" is the very basis of civilization? Especially when you realize that all the children are yours, if you are to call yourself civilized – every last one is your responsibility. I wrote up one page's margin and down another's: "You can protect your children from all but three things: You cannot protect them from who you really are. You cannot protect them from who they really are. And you cannot protect them from history. Aside from that – knock yourself out. And yet we try. We must. But the very civilization that was created to protect them is what now endangers them beyond all powers of protection, so our civilization has betrayed its purpose. And we all know that. And we're afraid." That's what Our Ecstatic Days is all about. Steve writes: "And so God's just one more Predator out there I have to protect my kid from."

A note I made toward the end of my second reading: "Often I'm moved to chills, often I'm thrown back on the essence of my own despair, a despair I've kept so private that I didn't know it even existed until page X. Fuck you, man. Thanks a lot. Now I know the inner address of a despair that I've kept secret from myself, and it might have stayed secret from everything but the grasp of great art, and there you went and did it, and, my brother, maybe one day I'll thank you for it, but not this day." But that was another night. This night, I thank him. For that's what great literature does: You don't lose yourself; you are thrown back upon yourself, stripped layer by layer until you must face what you'd much rather not, and so find yourself. That is when a great book asks you to be as brave as it is. That is its gift: A great book calls you past despair to dive back into the quick of your life. That moment of diving back is what Steve means by the "ecstasy" of his title.

"I promise you," writes Steve, "I absolutely promise you, that most of what we call, oh, history, happens for reasons that have absolutely nothing to do with why we think it happens."

By the time he makes that statement, toward the end of this masterpiece, you have no choice but to get it. You might not like getting it, but you get it. His characters are so savvy and so clueless. They understand everything but what's right in front of them. Just like you and me. We don't want to admit that, but Steve makes us admit it ... or ... you may make every rational excuse for dismissing his book and run, not walk, for the nearest exit supplied by your coziest complacency. For that's something else my friend will teach you, as he has taught me: just how many complacent exits you employ.

Beware your feelings about this book. For they will reveal you. That's what a great book does. Steve cautions (and you'd best listen): "You're surrounded by signs. Ignore none of them." 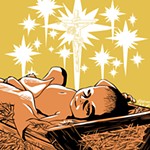 Letters at 3AM: If We Make It Through December
Everywhere I looked for a merry Christmas, I found contradictions too disturbing to ignore and paradoxes too entrenched to resolve

Letters at 3AM: These American Dreams
Steve Erickson's novel 'These Dreams of You' is a profound and hilarious salute to family values and America

Steve Erickson, Our Ecstatic Days, The Sea Came in at Midnight, Hotel Hamblin