Hobnobbing with the Style Avatar at the Grammys and ArtErotica! 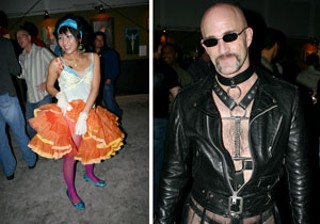 The guests at ArtErotica give the art some stiff competition. Shown here is the exotic Ling making her rounds, and consultant/designer Sebastian St. Troy illustrating an entirely different version of exotic. (Photo By Todd V. Wolfson)

MEOW MIX: Altogether, this year's Grammys were a very good show – entertaining and fast-paced, and everyone was on good behavior and remarkably well-dressed (with the exception of the band Hoobastank, whose unfortunate name also describes their Eighties clothes). Omigod, the Marc Anthony/Jennifer Lopez duet was absolutely abysmal – like a telenovella with him warbling as he moved around looking like a demented relative of Gomez Addams, and she ... well, let's just say that we can safely predict that tomorrow Jennifer Lopez will be arrested for the brutal murder of her Grammy dress designer, unless of course, the dress is from J-Ho's new "upscale" collection, Sweetface, in which case we can only presume she'll be so mortified at how hideous she looked, that she'll not only stop "designing" clothes but permanently retire into complete seclusion. But the pièce de résistance? The execrable tsunami tribute, which had the most mismatched assortment of music stars ever on one stage slogging through "Across the Universe" while looking totally disoriented. It was the most embarrassing segment since ... well, the J-Ho/Marc Anthony debacle earlier in the evening.

ON THE BOARDS: We had the best time seeing Aida at Zach Scott. Not being a fan of Madame ... I mean Sir Elton John's later work, I had serious reservations about attending anything that might include something like "Circle of Life" – but instead, I witnessed a captivatingly simple production of the musical. I don't know why I always seem to be so surprised at the singing, acting, and dancing talent we have here in Austin; maybe it's just the way that Zach Scott presents its shows that makes the talent seem so fresh. Before the show and during intermission, we visited with the brilliant pianist Anton Nel, my best girlfriend Bettie Naylor, the dashing Dr. William Jones, among others, as well as many of Zach's wonderful and dedicated staff, including Ann Ciccolella, Jim Reynolds, and Dave Steakley. Apparently, Zach Scott is beginning the process of raising the money needed to erect a new theatre – which may or may not utilize the original existing building that houses the Kleberg Stage. "Austin's been very good to Zach Scott," said Steakley. But Zach Scott's been very good to Austin, too. Personally, it would be a bittersweet experience for me to see the old theatre come down; it's the theatre in which I learned to sew and design costumes, and learning those things sent me off on a 25-year journey through the design and clothing industry. But a wonderful new theatre that would double Zach's current capacity would be a fabulous gift for all Austinites!

ART OF GIVING: Last Saturday was the fabulous annual ArtErotica auction and party, a benefit for ASA's Austin AIDS Emergency Fund, put on by the Octopus Club, which also produces the amazing Octo Tea Dance every year at the Oasis. Over the course of its 15-year history, the Octopus Club has raised nearly $1 million, all of it going to the cause. As producer Lew Aldridge points out, "All the costs are covered by the hosts and business donors so that every single dollar the event raises goes directly to an Austinite living with HIV, for essentials like rent, utilities, medications, and food." Jay Billig, contractor and owner of Jaythings Design, was the chairman of this year's auction and party event, and enlisted the help of Chris Ladd as curator as well as Chuck Watson (producer of the Zilker Trail of Lights), Anthony Mauzy (Teleportdoor music and art), and Sharon & Greg Keshishian of Ion Art (they donated the warehouse space for the party and are also the creator of the signage and trimmings at the new Whole Foods World Headquarters). Pamela Nevarez of Eatstreet Personal Chefs coordinated all the erotic desserts donated by a host of local bakers and confectioners, which made their entrance through the crowd on 8-foot litters lit with tiki torches and dozens of sparklers. There were more than 100 volunteers who helped out and special note must be made of the 150 artists who donated paintings, sculptures, and photographs.