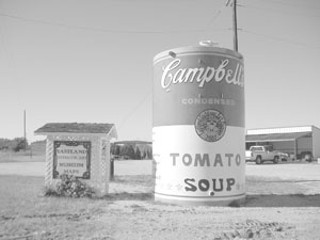 The Outdoor Art Museum brings some of the most famous works of the art world to the little town of Eastland. The collection includes images by Picasso, Georgia OKeefe, Frida Kahlo, and many others hanging on the outside of buildings. Of course, these paintings are not the originals but large reproductions done by local high school students and artists. "It's not meant to be deep," says Cathi Ball. "It's meant to be fun and maybe a little educational." There are currently 25 art installations around the city, with another three in the works. Ball started the project in May 2002 and hopes to finish this May after three years of work. The first piece of art was a 15-foot-tall oil field tank painted to look like a soup can, with a short biography of Andy Warhol on the back. The red-and-white can stands behind the Dairy Queen near the intersection of I-20 and Main Street. A small kiosk next to the art provides maps to the other installations. Ball, a former high school art teacher, came up with the idea after a group of citizens asked her and her students to do a series of panels to mask the abandoned Connally Hotel. The result was 114 feet of street scenes to make the decaying building look alive. When the city decided to rehabilitate the building they gave her back the panels. "I had several sheets of plywood that I needed to find a use for," Ball says. At first she thought she would do all of the paintings herself, but that proved to be too much even for someone with her energy. The high school art club did six of the pieces and another artist has helped with several more. A former mayor painted three of the masterpieces. "He's not an artist, so I had to sketch the piece out for him," Ball says. "It was kind of a paint-by-number thing, but he loved it." As you might expect in a community known more for Texas crude and ranching, the project got off to a slow start. After the town saw the first two or three pieces the enthusiasm grew. "It's been a community effort," Ball says. "I think it has exceeded everyone's expectations." Every new installation receives a front-page story in the local paper. Ball didn't get serious about her art until she was 40 years old. Her first art instruction was welding classes at the junior college. She was the only art teacher in the county until a foot injury forced her to quit. "One of the best Mother's Day gifts I ever got from my daughter was some scrap metal. I loved it," she says. "We're just trying to make the town a little cuter," Ball says of the project that has attracted visitors off of the interstate highway between Dallas and El Paso. She has tried to match the artwork with the hosting business. For instance, DaVinci's Mona Lisa is on the side of the Pizza Inn, Kahlo's self-portrait is on a Mexican-food restaurant, and a rendition of the pho-tograph of Marines raising the flag on Iwo Jima is on the VFW Hall. "At first you don't realize how big some of the paintings are," Ball says. The reproduction of American Gothic on the Farmers & Merchant Bank is an 8-foot square. The installation at the airport is 8 feet by 16 feet. Trying to mimic masterpieces with house paint provided challenges. The fumes forced the artists to paint outside or in barns. "When you mix two colors of house paint you don't always get the color you think you will," she says. About 100 miles west of Fort Worth, Eastland is probably best known as the home of Old Rip, the horned toad that lived for 31 years in the cornerstone of the old county courthouse. The outdoor paintings are not the only art in town. The local post office (411 W. Main St.) is also an art gallery of sorts. Besides a Depression-era mural, the post office has a Stamp Window done by a former postmaster using 11,217 stamps to create an unusual design. For more information on Eastland, call the chamber of commerce at 877/265-3747 or go to www.eastlandtexas.com.