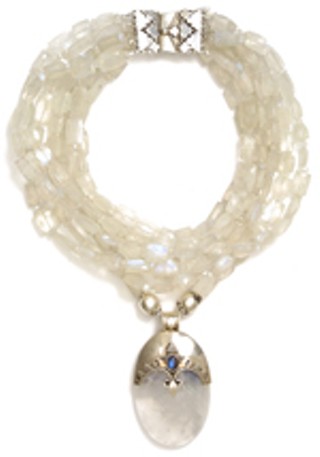 A magnificent moonstone and sterling silver necklace
from former Texan Marti Oppenheimer
(www.martidesigns.com),
who will be showing her jewels at Russell Korman on Dec. 17th and 18th.

WORDS OF THE WEEK "Call me old-fashioned, but nothing says I love you, like a big, old rock!" answered Catherine Zeta-Jones when asked by Brad Pitt what to buy his wife Jennifer Aniston for their anniversary.

CELEB-A-THON It is a sad state of affairs in the star game these days. It just doesn't matter anymore. Anyone can be a celebrity: a useless slut of an heiress who is unafraid of displaying any of her parts to an unwilling audience, a fertilizer salesman who is convicted of murdering his wife and unborn son, a sports player who bites a piece off his opponent, or a failed contestant in a reality show whose claim to fame is eating raw animal entrails in front of millions of viewers. I suggest to the star-makers – you know, that panel of distinguished professionals on high who allow folks like Jessica Simpson to be a star – that perhaps we need to adopt the practice of licensing stars. And we don't mean licensing products under their name. What we do mean is to put any prospective star through rigorous testing to determine if they are worthy of our adulation. An initial questionnaire might include such questions as, "Why you?" and "Is this how you intend to look if you become a star?" We could weed out thousands of them with those two simple questions. In a perfect world, Li'l Kim would be gone; we've seen more of her bosoms than her bra has. Jessica Simpson would evaporate; she's the luckiest woman in the business, considering her meager charms. She's the Jayne Mansfield for a new century. Clay Aiken would just vanish. By the way, have you heard about the Clay Aiken Diet? You eat everything you want and then play a Clay Aiken CD and it all comes back up. Being a star is such a privilege that it should be meted out conservatively, not with a lasso that snags innocent bystanders and makes them into stars. Take William Hung, for instance, the worst singer ever inflicted upon us by American Idol. Giving him his literal 15 minutes of fame has been so cruel. It's allowed him to think he actually has something to offer the world. A world that regards Mr. Hung as a hysterical, pathetic joke – how cruel. Who is the more international laughingstock? Stardom is an unforgiving and demanding mistress, making toast out of those who are not up to snuff (did somebody say Tara Reid?). Usher is someone who made the first cut, but should have been winnowed out during the second section of the Prospective Star Application. You know, the part that addresses how egotistical you will become when someone tosses a few dollars your way. As the too-young-to-be-so-full-of-himself star now seems to demand that red carpets be specially cleared before he'll consider walking down them, Usher is not unlike his cohort in the business Foxy Brown. Miss Brown, who is famous for unknown reasons, has reportedly made a fool of herself in one of New York's best stores by allegedly calling a salesgirl a "stupid bitch" when she could not find an item in Miss Brown's size. In other chic stores she's allegedly thrown such tantrums when arriving after hours that they've finally let her in just so she'll stop embarrassing them out on the street. Not star-worthy attributes! These two, along with Jocelyn Wildenstein and Nicole Ritchie, prove the old maxim that this is what happens when you give stupid people too much money. Being a star needs to be much harder than it is. I've forwarded this item to the powers-that-be for their consideration, in hopes that we could stop this sort of indiscriminate star making. Of course it means we'll also eventually have to do away with the "I Used to Be Famous"-type television shows. For the foreseeable future, however, rest assured, we have plenty of candidates – probably enough to fill the next 75 years of such programming. So you'll be dead and gone before they run out; though I'll still be like Neely O'Hara: "Young as springtime and twice as fresh!"

TEX EXPATS Former Texan Marti Oppenheimer, jewelry designer, is bringing her spectacular wares to Russell Korman Jewelers (3806 N. Lamar, in the Lamar Village Shopping Center), Fri, Dec. 17, 10am-7pm and Sat., Dec. 18, 10am-6:30pm. Marti attended the University of Texas and for 20 years called Texas her home. Her jewelry is amazing, incorporating semiprecious stones such as moonstones, carnelian, and amber, said to mystically empower the wearer. View her work on sale at Russell Korman and online at www.martidesigns.com... Also on the expat design horizon are Brandon Evans and Shawn Rosenzweig, both UT graduates, who have founded ThreadCountzzz, a company producing luxurious 400-thread-count cotton sleepwear. After traveling so frequently for business and experiencing frustration at the "quality" of hotel bedding, the idea came to them: If your sleepwear is high quality, it really doesn't matter what type of sheets you sleep on. Currently carried in Austin by Oh Baby and Julian Gold, the goods are available at other Texas locations, including Stanley Korshak in Dallas and Tootsie's in Houston, as well as at the company's Web site, www.threadcountzzz.com.