Tomorrow, we fight; today, we mourn

At some point during the campaign, President Bush was asked what would happen if Iraq successfully instituted a democracy, yet the electorate voted in a Muslim fundamentalist government. He hoped that wasn't going to happen, he answered. Which seems especially ironic, given that at the time he was very much running a Christian fundamentalist campaign.

Exit surveys found that "moral values" (which don't necessarily have anything to do with either morals or values) and the war on terror were overwhelmingly two factors cited by those who voted for Bush. My gut feeling was that Bush was going to be re-elected: In uncertain times, with serious social, cultural, political, and international diplomatic confusion, Americans (as with most people) are far more comfortable with what they know. Even if these forces they know are directly responsible for many of the chaotic circumstances.

Certainly the Bush campaign understood this; they (the extended, widespread community of Republican political operatives and their religious and hard-right fellow travelers) accentuated every disruption, exploited every fear. They were not only delighted but instrumental in helping craft state constitutional amendments limiting marriage to the union between a male and a female, and in addition exaggerated threats, promoted fear, and helped with the many assaults on John Kerry and his character. Kerry's often fumbling, rarely imperial responses didn't help.

I use the term "imperial" deliberately. Bush's fraternity-boy smirk was not a campaigning negative, but a positive – amplifying his certainty about almost everything (based on faith and gut rather than study, assessment, and consideration). Born to power, Bush believes that God wants him to be president, and therefore what he wants to do, feels we should do, is right. Evidently, a majority of voting Americans agree with him.

Consider the criticism of Senate minority leader Tom Daschle: that he was an obstructionist, overly partisan, and continually frustrating Bush's agenda. Given the Republican majority in both houses of Congress and that Bush has not vetoed one significant piece of legislation, what were Daschle's crimes? "Overly partisan" meant opposing Bush on anything. Given the traditional separation of powers, a legislator's moral responsibility is to offer just such considered opposition. Yet Daschle was labeled "obstructionist" for holding up mostly truly outrageous legislative packages, such as the energy bill, which was so pork-laden it should have carried an advisory for Jews and Muslims against reading it. Ignoring the oozing pork, if the idea is to curb this country's dependency on foreign oil-producing countries, wouldn't devoting resources to developing alternative energy sources and placing reasonable restrictions on energy use – rather than depleting any and all U.S. reserves of fossil fuel, which is a finite resource – be the way to go? Once these deposits are gone, they are gone; what about our dependence on foreign resources then?

Okay, so I never thought I'd be defending Tom Daschle, who always struck me as the poster child for just how mundanely corrupting power is. But the new Republican definition of "obstructionist" is anyone who disagrees with them on anything in any way. The new take on bipartisanship has nothing to do with working together or cooperation, but simply means that the other party has been gerrymandered and demonized into such impotence it no longer has significant legislative power.

On election eve, I was a guest on radio station 1370AM. I called in twice for a few minutes each time – not to present a dissenting point of view but to suggest an aura of fairness that didn't exist. Instead, I was reminded again that the Republican forces are so worked into a self-righteous state that they ignore reality and their own political power. They forget they control the presidency and Congress, as well as many statehouses. They blame most things that are wrong in this country not on terrorists, complex cultural situations, or difficult-to-deal-with-and/or-understand economic trends, but on the Democrats. Their most important party plank is that it is not only good but also necessary for a significant number of Americans to hate a significant number of other Americans. In their eyes, there is no principled disagreement – no well-intended, well-meant conflict between those of different viewpoints.

Instead, there are the good Republicans – God-fearing, American-loving, moral people – and the Democrats: mean-spirited, anti-patriotic, misguided heathens. On the radio show, they ranted against lawyers becoming involved in the judicial process, ignoring that this was the very way Bush first became president. Later acknowledging this, they found fault still lay with the Democrats who initiated the whole Florida legal quagmire. Shamelessly, they attacked everything Democratic and blamed everything wrong on that party. The solution to every problem is to get rid of the Democrats. This offered not reluctantly, but gleefully; their sheer delight in attacking the "bad guys" in every way possible completely dismissed the notion of honorable disagreement or principled dissent.

Ordinarily, I would at least celebrate this election because of the extraordinary turnout, because so many new voters came to the polls, spread across every demographic category. I would celebrate the genius of the U.S. Constitution and the American democratic republic. Instead, in the face of four more years of the Bush administration I feel nothing but gut-wrenching, soul-smothering despair.

Domestically, this administration's policies of coupling tax cuts with out-of-control spending, gutting environmental restrictions while shredding the social safety net, and ignoring the disenfranchised while serving the very wealthiest Americans will take us generations to recover from, if we do. But internationally, America's arrogance – our anti-Muslim racism matched to a self-assured and proudly disdainful ignorance – may well create a world situation from which there will be no recovery.

My despair will dissipate. We – all of us who deeply care and truly believe in the extraordinary genius of the democratic process, the power of the people, and the responsibilities of human community, both nationally and internationally – will resume the struggle. This will come. But now I deeply grieve for our country and its future. Unfortunately, there is no time limit on this struggle, and tomorrow will be soon enough to heed Joe Hill's dying words, invoked after the legendary union leader was murdered: "Don't mourn. Organize!"

But today, and probably only today, I mourn. 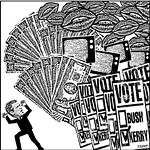 Letters at 3AM
How to beat Bush