Will our Style Avatar Stephen audition for the new Jerry Hall reality show? We think he should, too. See inside. 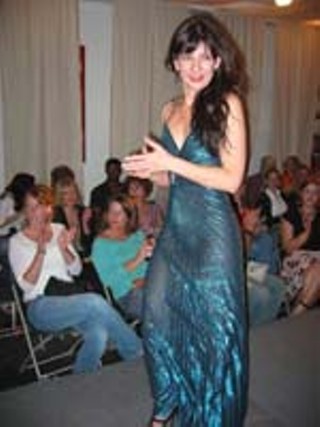 Pink Salon's Deborah Carter, the Queen of the Night, ruling her subjects at the Pink Circus of Astrological Sexuality. (Photo By Todd V. Wolfson)

CATWALKING We made a front-row appearance at Pink Salon's Pink Circus of Astrological Sexuality, a celebration of the salon's fifth anniversary. With its busy parade of clients, Pink is very dear to me. Owner Deborah Carter, her daughter Farah, and their team do work that combine a fashion-forward approach with expert workmanship – not to mention it is one of the most happening places in town with a wide array of art and clothing to complement the hairstyling. A circuslike atmosphere prevailed that night (pretty much like it does there everyday), with a juggling trapeze artist, a trumpet soloist, and music by the always-wonderful Trey Lopez. The show itself was a brilliant mélange of color and textures by designer Judy Masliyah. Her exquisite work was as breathtaking as it always is, especially the vintage-fabric coats and the suits trimmed with vintage fur (why she's not at Neiman Marcus, Bergdorf, and Bendel is a mystery to me). Dawn Denton for Boudoir Queen (Pink's in-store atelier/boutique) brings her very L.A. approach to restyling vintage clothes, and those clothes are flying out the door of the salon so fast your head will spin. Local favorite Chia's playful combinations of fabrics and details charmed the large crowd. It was a creative, original extravaganza and a very fun show, though two things stuck in my craw about it. One was an exquisite vintage Dior-like garden party gown that was somewhat dishonestly shown (in my opinion) as one designer's own creation, which it definitely was not. The other thing that really bothered me was the boorishly Neanderthal doorman who had zero finesse, style, or diplomacy. As soon as I reluctantly aired my first concern of his rudeness to friends, the stories came pouring forth. Other attendees also had many complaints about his behavior. One wonders how someone like that can carry on daily business with such an obnoxious manner. (Sorry, Deborah, I know a doorman is necessary, but you can do much better than that knuckledragger, and you work waaay too hard to have some goon at the door leave a bad taste in the mouths of guests.) A few days later I made a stop at the party for Lucky magazine's guide to Texas shopping, thrown by FactoryPeople's Le & Thomas Popov in their tres chic store. Lucky's beautiful fashion editor, Gigi Guerra, was on hand; she's such a fan of Austin, and her national attention to us is so good for everybody here. A large part of the fashion crowd was at Cat Swanson's show at Oslo, which was, by all reports, a stunning presentation of Cat's new collection and fall collections from a number of retailers. Oslo's wonderful Joel Mozersky interior lends itself beautifully to intimate stylish events (it's where I saw the dreamy Hedda Layne perform), and with Cat's new collection being called her most sophisticated yet, I'm sure the combination of clothes and venue was wonderful. The Austin Winter Social Olympics have barely begun: Fasten your seatbelts, it's going to be a bumpy season.

JERRY'S MEN I love Jerry Hall – and you cowboys, if you feel the same, this may be your chance to spend some time with this goddess. Come on, you know you've wanked off thinking about her, but are you man enough to date her? VH1 thinks you just might be. They are producing a new reality series called Kept, in which Jerry will take 15 carefully selected escorts (who appear to be between the ages of 25 and 35) to accompany her on her hijinx through London's society, fashion, and rock & roll scenes. Let Jerry take you on a wild ride while she decides which one of you she might want to keep. Auditions are here in Austin, at the Continental Club, Thursday, Nov. 4, 6-9pm, and another location yet-to-be-disclosed. Contestants will meet with casting producers Chris Franklin and Eve Overland at the open calls or can e-mail them at cfranklin212@yahoo.com or visit the Web site www.vh1.com/kept.

A HERITAGE OF STYLE It is a great honor for me to have been appointed moderator of a panel of authors of books on Western wear, I See by Your Outfit: The History of Western Wear, at the Texas Book Festival. The fest is this Saturday, Oct. 30, 11:15am, at the wonderful Bob Bullock Museum Spirit of Texas Theatre. On board to speak with us will be the authors of Cowboy Shirts: An American Classic, Art of the Boot, Nudie: The Rodeo Tailor, and Cowboy Boots. Approximately 15 minutes after the end of our session, the authors will sign their books at the TBF signing tent at 12th & Colorado (see www.texasbookfestival.org for more details). Most of the authors will also be appearing at a booksigning and reception at 4pm at Blackmail (1202 SoCo) the same day. Call DAnger6-7670 (326-7670) for more details.