How does Stephen M. M. repeatedly get such hot dates? By being the Avatar's Avatar, that's how. See what local gigs he appeared at this week … 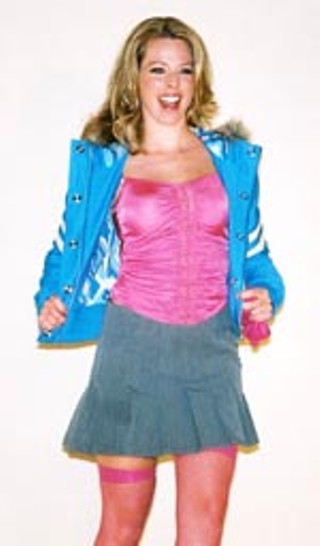 In a show of more mature styles, this model illustrated a more youthful set – as you can see by the return of thigh-high hose, at the Red Cross benefit, Threads. (Photo By Robert Godwin)

COUTURE FOR A CAUSE Two weeks ago the fall preview fundraiser at Cupidz Clozet was packed. The owners and staff were almost overwhelmed by the amount of sales. Since they have such a to-die-for collection of brooches, I became weak at the sight of all the sparkling beauties and almost fainted into the arms of my dazzling escort Deborah Carter and my dear friend Amy Weaver – and was unable to leave without purchasing two: all in the name of charity, of course. Cupidz Clozet has exquisite vintage clothing and goods as well, and gives 100% of its profits to charity... On Sunday I arrived at the Renaissance Hotel with the lovely Miss Kitty from Austin Music Network on my arm for the Red Cross fashion show, Threads. It was a very ladies-who-lunch sort of affair, but we had a great time. The fashion was from Dillard's Barton Creek store, so we got a peek into what's in the mall for fall, but the clothes I loved the best were the vintage Red Cross uniforms from the Forties and Fifties worn by the volunteers at the show. The real highlight was the divine Sara Hickman, singing her heart out and sounding like an angel. What a gracious, beautiful woman she is. She arrived onstage bearing a cake in her hands – a banana cake with cream cheese frosting, made by her own talented hands and decorated with flowers from her garden. She auctioned it off, winning $300 for the Red Cross. More money was raised from ticket sales, donations, and a silent auction, and the turnout was very good – boding well for its becoming an annual event... but the most Austin fashion event so far was the Regular Jo Fashion Show at Jo's Hot Coffee – a night of charity for several animal rescue organizations held in the Hotel San José parking lot on Sunday night. FactoryPeople showed wonderful rock & roll wear, including fabulous men's shoes; Service showed their excellent collection of retro-feel menswear; Blackmail did what it does best – glorious black; Five Oceans showed vintage beachwear (this store has amazing things, and the owner/buyer not only has remarkable taste, but remarkable sources for her goods!); Creatures also showed some knockout looks and really great women's shoes. Therapy also showed (where was Gomi?). All the stores, however, took a backseat to the stars of the show: the adorable dogs walking the catwalk. The proud pooches strutted their stuff in hopes of finding new masters and new homes. This is Jo's second year of this event, and it's already a South Austin favorite.

EMMYSPEAK A few highlights: Every one of the Sex and the City girls should be punished for bad hair – Cynthia Nixon and Kim Cattrall especially, since it was a clear case of DHOH (Did Her Own Hair). Jane Kaczmarek looked wonderful, I thought, though she wound up on several Worst-Dressed lists. I thought her floral sheath and train had a very particular appeal harking back to the days of Jacques Fath. Debra Messing needed some help, but she's a smart woman; she found it in the form of Anthony-Nak jewels, which drenched her from neck to wrists and fingers. Give 'em the old razzle-dazzle, Debra! And Meryl Streep ... Meryl Streep has horrible taste in clothes to begin with, but the God-given responsibility of all designers is to guide their clients into making better choices. You know she has someone make those dreadful creations for her. Can you imagine trying to find them in a store? It's her designer who dropped the ball (gown). Alternately, I thought Meryl was pretty damn funny by dissing her Angels in America co-star Emma Thompson. Rumor has it that there's an incendiary feud of the Bette Davis-Joan Crawford variety between them. Yum, grab a dish and belly up to the trough! Jennifer Aniston did not DHOH; she obviously did absolutely nothing with it. What the hell is the point of wearing Chanel couture and daytime hair? It doesn't matter that it was daylight in L.A. when the awards began; it's still a drop-dead formal event, and wearing stupid hair to it proves that spending $20,000 on a dress does not give you glamour. The OC diva-in-training Mischa Barton understands glamour: Her sequined Twenties chemise was exquisite, and even though she was not nominated for anything, I'd give her dress an award. And what is wrong with Sharon Stone these days??? She's beginning to act like Farrah Fawcett when Farrah's not feeling so well. Jennifer Garner may not have been feeling well when she chose a white lace Little Bo Peep dress by Oscar de la Renta, but so it goes with awards ceremonies. They're all playoff games heading for the Superbowl of Fashion: the Oscars. I wish some network would find it worthy to broadcast the Council of Fashion Designers of America awards. Until then, I'll leave you with a quote from James Spader, who won Best Actor in a Drama Series: "You've all made wonderful choices in shoes and dresses tonight, and you all look absolutely beautiful ..."