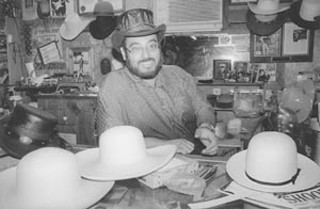 Manny Gammage's Texas Hatters waltzed into the encyclopedia of Texas legends a long time ago. It is impossible to determine exactly when the name became synonymous with family headwear. It was definitely before the crowded little hat shop was immortalized during the Redneck Rock Revolution.

The roguish Gammage passed away in 1995, but the business that his father began more than 60 years ago lives on, as does the legend of the hatmaker to presidents and the stars. "Manny was like a father and an uncle to me," says David Torres, the hatmaker apprentice who now owns the shop on I-35 in Buda along with Manny's wife, Norma, and daughter Joella. They all three still work in the shop cutting, sewing, and shaping hats that are as distinctively Texan as they are unique to the personalities that wear them.

The legend began sometime in the 1920s when Marvin Emmanuel Gammage Sr. earned his master hatmaker papers while working at the Southern Hat Company in Houston. "Pappy" Gammage also got his papers as a chemical engineer and worked much of his life for corporations. With each job transfer, the elder Gammage would rename the hat shop he would established in his garage after the new town.

In 1965, when the family opened a shop in South Austin, Marvin "Manny" Gammage Jr. suggested the name be changed to Texas Hatters. After a tour of duty in Vietnam and a short career as a door-to-door insurance salesman, Manny decided to continue the family tradition.

"Manny knew personalities," Torres says of his former boss and mentor. "He had a way of making people comfortable. He was one good salesman."

On any given day you never knew who might walk in the front door. Willie Nelson, Ray Benson, and Jerry Jeff Walker all own a Gammage original. Robert Duvall had Texas Hatters make a hat for his role in the movie Lonesome Dove and then came back to have one made for him personally. One of Manny's most cherished possessions was a picture of him giving a black Western hat to Ronald Reagan.

Gammage had a down-to-earth attitude of dealing with the rich and famous. "He used to always say: 'Those people put their pants on one leg at a time just like the rest of us,'" Torres remarks.

Since Gammage's passing, Torres has become the frontman for the business. The ever-present tape measure draped around his neck is as much a tool of his trade as his sense of humor. The affable Torres learned more than just hatmaking from the master.

When first-time hat buyers walk into the shop, Torres sizes them up in an instant. Then he subtly asks the standard questions: What kind of environment is the hat going to be used in most often? What kind of wardrobe will it go with? On what occasions will it be worn?

With this simple knowledge and an idea of what the customer is looking for, Torres begins gently suggesting styles and brim size. "I want you to look and feel comfortable in your new hat," he says. Torres recommends customers bring in pictures of hats they like. He can fashion any style.

Felt hats are favored for dressy occasions, and cold and wet weather. Straw hats are recommended in the Texas heat; the tighter the weave the more durable. Texas Hatters also offers a cross between the two with a felt brim and straw crown called a "Half Breed." The extra protection from the sun is favored by people who play and work in the sun a lot.

The hats come with a lifetime guarantee, "within reason," he says. As with most things, with hats you get the quality you pay for. "I've seen hats come back for cleaning that my grandfather-in-law made," Torres says. "We've had our hats handed down in wills."

Texas Hatters fills most orders in about a week. The shop is at the FM 2001 exit just past the Buda exit on I-35 south of Austin. For more information, from Austin call 312-0036 or toll-free 800/412-HATS. To see pictures of the hats, go to www.texashatters.com.