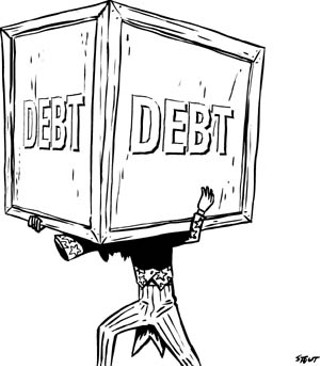 Dick Cheney ranted that a vote for John Kerry means "we'll get hit again." He knows better but he said it anyway to create controversy and grab headlines from two stories that hit the same day. The New York Times, Sept. 8: U.S. CONCEDING REBELS CONTROL REGIONS OF IRAQ – U.S. DEATHS PASS 1,000 – PENTAGON IS NOT CERTAIN WHEN AREAS CAN BE SECURED – "General Myers said the Iraqi forces would probably not be ready to confront insurgents in [central Iraq] until the end of this year. ... [I]f significant parts of the Sunni areas cannot be secured by January, it may be impossible to hold a nationwide balloting that would be seen as legitimate." Sixteen months after Bush declared the end of major combat in Iraq, the U.S. still does not have military dominance, cannot control crucial regions, and cannot guarantee the often-promised elections. Gruesome news for a president running on his war record. So Cheney did his best to snatch the lead sound bite on the evening news; the media, as usual, fell for it.

The second story Cheney pushed out of the spotlight that day: The New York Times, DEFICIT ANALYSIS AND BUSH DIFFER – "Even if the United States saved billions ... by withdrawing all troops from Iraq and Afghanistan, President Bush would still be unlikely to fulfill his promise to reduce the federal budget deficit by half within five years, the nonpartisan Congressional Budget Office said. ... [T]his new report is sobering because Congressional analysts reached their conclusions even when they used extremely optimistic assumptions about war costs in Iraq and robust economic growth over the next few years." In short: Our struggling economy, and all who struggle in it, will likely continue to struggle for a long time.

On Sept. 3, the front pages featured Bush's acceptance speech, while deep inside The New York Times another story was told by economic columnist Floyd Norris: IN THE BUSH YEARS, GOVERNMENT GROWS AS THE PRIVATE SECTOR STRUGGLES – "In the area that people think of when they hear about personal income – wage and salary payments ... the entire increase [from the year 2000] ... comes from the government payroll. Adjusted for inflation, private industry is paying almost exactly the same as in 2000. ... No administration back to John F. Kennedy has done as poorly." Add this, from the Times' economic columnist Daniel Gross, Sept. 5: "From the beginning of 2001 to the end of 2003, the economy added $1.317 trillion in gross domestic product to $4.2 trillion in debt. That means that each new dollar of economic output was accompanied by $3.19 in new debt. ... In the first quarter of 2004, debt rose at an annual clip of 8.6%, more than double the growth rate of the economy." That means that our economy – on all levels, from you and me to the federal government – is limping along on credit. Interest rates will certainly rise, making credit (ours and the government's) harder to pay for. Meanwhile, wages are stagnant and job growth is nil.

While Bush stumped loudly about how 144,000 new jobs in August means his policies are working, on Aug. 26 the Census Bureau reported that more Americans were poor and uninsured in 2003, especially in the South, and that the rise in poverty was worst among single-parent families. But aren't August's job numbers good news? Sept. 6, The New York Times, Eduardo Porter: "There was a time when adding just under 150,000 jobs a month, three years into an economic recovery, would have been considered a disaster." That number barely keeps up with population growth. Which means August saw zero job growth. "In July, personal income growth slipped to its lowest level since 2002. Consumer confidence slid in August, and sales at big retailers like WalMart and Sears slowed sharply." Most people shop at Wal-Mart because they can't afford to shop anywhere else. If Wal-Mart's sales are sharply down, it means many can't even afford the lowest prices anymore. "Ford and General Motors warned that they would cut production because unsold cars and trucks were piling up on their lots." And why is that? "Average hourly wages of production workers and non-managerial service employees are 2.5% above what they were a year ago, not quite enough to keep up with inflation." [My italics.] Average workers are making less than they were a year ago. "Consumers have supported the economy almost single-handedly over the last two years, spending the proceeds from tax cuts and borrowing to refurbish their homes and to buy cars and other durable goods. But the effect of the tax stimulus is waning. As interest rates rise, the resulting costs are reining in mortgage refinancing and other household credit growth. From now on, workers' spending will depend more on wage income." [my italics] Yet that income is not only flat, but, with inflation, it has decreased. So consumer spending will decrease. Insofar as this economy has been "recovering," it's been because of consumer spending. If that spending declines, expect a recession by next spring.

If the U.S. goes into recession, will foreign countries continue buying the Treasury bonds that sustain our heavily indebted government? If that money flow seriously diminishes, Uncle Sam's pockets will be empty; then instead of recession we might face what no U.S. economist will yet speak about in public: Depression. No less a figure than Fed Chairman Alan Greenspan is worried. USA Today, Sept. 9: "He warned high deficits could lead to rising interest rates, inflation and even 'stagflation' – high inflation and low growth." High inflation with stagnant salaries would mean a lot of trouble for a lot of Americans.

Who's hurt most by this economy? The New York Times, Aug. 28: "Last year, 1.6 million American households filed for personal bankruptcy, up 33% from 2000 [my italics], according to figures kept by federal bankruptcy courts. And if current trends hold, nearly one in seven families with children will declare bankruptcy by the end of the decade, said Dr. Elizabeth Warren, a Harvard Law School professor. ... 'These people aren't poor,' Ms. Warren said, 'but this is the first generation where college-educated people with a good job cannot find financial security.' ... The reason is that the price of things that people cannot control, but need to get ahead of or stay ahead of [rent, health care, credit, school tuition, gas] are rising much faster than inflation or wage increases." One fact alone wipes out Bush's tax cuts for common folk: "Higher gas prices have cost the average family about $500 a year." The Census Bureau reports that the percentage of households with income between $25,000 and $75,000 has dropped from 51.9% in 1980 to 44.9% in 2003 – that's huge, more than 10%. Ten percent of the middle class driven into "working poverty" in the last 23 years! Plus at least 10% now living on the brink, with their credit maxed out, interest rates rising, salaries not keeping up with inflation, and job growth not even keeping up with population growth. All the numbers point one way: Hard times are about to get harder.

This isn't politics. These are numbers published by our government.

Yet Arnold Schwarzenegger can grab headlines and draw GOP cheers by saying, "To those critics who are so pessimistic about our economy, I say: Don't be economic girlie men." The cheers don't change the numbers. USA Today, Sept. 1: "The National Association of Purchasing Management's Chicago branch said manufacturing activity in the Midwest advanced at a slower pace in August than in the prior month as new orders, production and order backlogs all lost steam." Which means: Business leaders expect lean days. They're not ordering; they're not producing; they're reducing inventories. Most of them will vote for Bush because he'll take care of them. But who'll look out for working people?

Bush likes to crow, "The economy is strong and getting stronger." If he believes that, he's ignorant of reports issued by his own government. But if he does read those reports, or somebody reads them to him, he's lying and knows it. Either way, a raw deal for America.

As for the war on terror ... USA Today, Aug. 31: "Hundreds [my italics] of powerful computers at the Defense Department and U.S. Senate were hijacked by hackers who used them to send spam e-mail, federal authorities say." USA Today, Aug. 24, quoting Lee Hamilton, vice-chairman of Bush's National Commission on Terrorism Attacks: "The U.S. government still has not determined with any precision how much al-Qaeda raises or from whom, or how it spends its money." We're staring a recession in the face, Defense Department computers are hijacked by we-don't-know-whom, the Pentagon admits Iraq is out of control, and three years after 9/11 we haven't a clue about al Qaeda's resources, while Bush grandstands, Kerry sputters, and TV brays what's juicy instead of what's real – a raw deal all around.