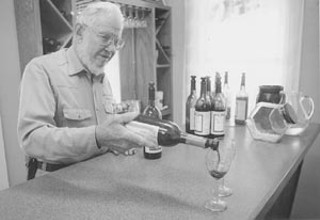 Lehm Berg Winery continues a centuries-old wine-making tradition. You might not think of Giddings as being a hotbed for the juice of the vine, but the family tradition of making beer and wine can be traced through generations of the area's descendants of German immigrants.

The little winery occupies the Droemer homestead on the west side of town, more famous for its beautiful redbrick courthouse and the barbecue at the City Market than growing grapes. Carl Droemer, 80, raises Blanc du Bois, Lenoir, and Mustang grapes between the house, the old brick kiln, and the empty buildings of the family furniture-manufacturing business.

Not only does Droemer make nice modern wines like Merlot, Primitivo, and Riesling, but he also offers very drinkable traditional wines made from raisins, strawberries, and native grapes. "I was in my 30s before I knew they made wine from anything but Mustang grapes," Droemer says.

The wild grapes cover fences and trees in much of the eastern half of Texas. When immigrants began to fan out across the state they quite literally lived off of the land, and the native grapes made a tasty wine and jelly if you added enough sugar. "My grandparents called it communion or church wine," Droemer says.

His clan arrived in Giddings around the turn of the century and entered the brick-making business. The winery's name, Lehm Burg, is German for "clay hill." "Used to be that every little town around here had a brick factory or two," Droemer says. The wood-burning kiln sits abandoned under a towering oak tree south of the winery.

"It's a hobby that's taken over," Droemer says of his wine-making. It started a few years ago when his son tried a wine-making kit and was less than satisfied with the results. The father and son team experimented with several family recipes and began to hit on something. "We always brought our homemade wine to functions, and everybody seemed to like it," Droemer says. From there the bottling steadily grew until they opened the winery in 2002.

On most afternoons Carl and his wife, Mary Beth, are greeting visitors in the house where he was born. In front of the brick building is the beehive-shaped smokehouse that serves as the aging cellar. In the back are stainless steel vats with this year's brew slowly aging.

Droemer is happy to show guests around and talk about the wine-making process. A former construction engineer, he talks about wine-making with a chemist's attention to detail and a drinker's sense for flavor. Besides learning the intricacies of wine-making, the spry retiree has become quite adept at using computers.

Unlike most commercial wineries, Droemer doesn't kill the natural yeasts of the grapes. Instead, he works with it like a carpenter would work with a piece of wood to get just the right shape. The result is a more natural flavor and a longer shelf life. The downside is that obtaining the consistency of tastes from batch to batch is difficult.

Wine-making is dependent in a large part on the vintner's own prejudices, and Droemer's preference seems to lean toward the drier wines. Even his "sweet" wines, like the Riesling and Muscadine, are not syrupy sweet, as is often the case. The strawberry wine is refreshing with just a hint of fruit flavor. "I don't sweeten it to death," he says.

One of the more unusual offerings on the wine list is a raisin wine. During Prohibition, raisin wines were popular with home brewers because the supplies were readily available. Droemer's old family recipe turns out a semisweet wine that isn't like anything you'll buy in the grocery store. "Try it over a bowl of vanilla ice cream," he recommends.

To get to Lehm Berg Winery from U.S. 290: On the western edge of Giddings, take Navarro Street south and make a right at the stop sign. Then go about a quarter-mile to 1266 CR 208, just past the family hardware store. The tasting room and gift shop are open most weekdays from 1 to 6pm, Saturdays 11am to 6pm, and Sundays noon to 5pm. For more information, call 979/542-2726 or go to www.lehmbergwinery.com.