A babe on each arm and a case of forbidden Grey Goose: just another fabulous night in the life of Your Style Avatar!

Glamour girls Liz Carrasco of Jezebel, Christie Butler of Jewel magazine, and Amy Weaver of Vylette, at By George (Photo By Amber Novak) 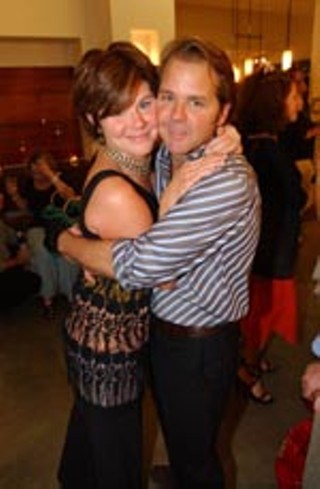 GLAM, GLAM, GLAM Omigod, I went to the best party I've been to in a thousand years. Matthew and Katy Culmo threw themselves a fabulous shindig to celebrate the 25th birthday of their award-winning temple of fashion, By George. What an amazing success story they are, and Matthew, so slim and handsome, and Katy, ebullient and charming, were glowing with pride as the guests (a dazzling who's who of Austin's fashion, art, and business worlds) genuflected before them. I had a double-date of sorts. I arrived with the divine Deborah Carter of Pink Salon on one arm and designer Dawn Denton of Boudoir Queen on my other. Deborah wore a drop-dead chic silk dress by Judy Masliyah (available at Pink Salon), and Dawn wore her own gorgeous design in silk velvet and charmeuse that garnered compliments all night long. I showed off my chic new blond bob and a burgundy and green iridescent Thai silk shirt of my own design, but we practically looked like chopped liver next to some of the most beautiful clothes in town on the backs of some of the most glamorous citizens. The incredible Trey Lopez played the tunes that kept the pace up in the store, which was wall-to-wall people. Outside, the parking lot had been turned into a garden with a carousel bar and enormous images of By George's fashionable past projected on a two-sided screen. The food was glorious and the cocktails were lovely (even though I waited in line for 20 minutes for a martini only to be told by the hoochie-mama behind the bar that she wasn't serving martinis – only mojitos, champagne, beer, and wine – and that she didn't have any vodka. "What's that entire shelf of Grey Goose behind you?" I ventured. "I can't use that," she snarled, and flounced off to wait on someone else. I had visions of her becoming permanently injured in a horrible mojito-making accident as I went to find a more accommodating bartender). Guests included Kelly Fielding of Paper & Ink; Brian Bowers and J.D. DiFabbio of Plan B Studio; Phil Hudson, Lance Morgan, and Amy Prince of Brilliant; Clarissa Hulsey of Urban; Eddy Dean of Tribeza; Jessica Slutsky of Sabia; Garden Room manager Julia Copp with her gorgeous daughter Kara Crow, a senior UT design student; By George manager Scott Butler; Image consultant Paula Lundgren; Maristella Ostrewich of Sage Salon; Mark Ashby of Ashby-Ames Interiors; Joel Mozersky of One Eleven Design; Tony Senecal; Ted Allen; and hundreds of others just too fabulous to mention.

STYLE CALENDAR This week brings the kickoff of Tribeza's three-day fashion event beginning with the Boutique Crawl, Thursday, Sept. 9, 6:30-9:30pm, followed by a Nordstrom Fashion Event with two shows on Friday, Sept. 10, 6 & 8pm, and the finale, the Tribeza Fall Fashion Show 2004, on Saturday, Sept. 11, including retailers Fetish, Kick Pleat, the Garden Room, Trio, and Vylette. Go to www.tribeza.com for tickets.

BREATHING & EATING Our friends Bill Pitts and Jose Buitron at Jose Luis Salon inform us that they were visited by the Oxygen Channel, who following around bride to be Katie Knieren as she prepared for her wedding (the only place she would go to show off the fabulous salons in Austin). The show is called Real Weddings and will air at the end of September. Bill and Jose also reminded me that the salon (along with The Austin Chronicle and others) is sponsoring AIDS Services of Austin's annual Dining for Life fundraiser on Monday, Sept. 13, where dozens of Austin's most prominent restaurants have donated a percentage of their proceeds that evening to ASA. Dining for Life makes it easy for you to give – all you have to do is what we all seem to do anyway, which is go out to eat at a favorite restaurant. Go to www.asaustin.org for a lengthy list of participants and then go chow down.