George-ness, Weird-ness, and what happens when Stephen does not get invited to a party 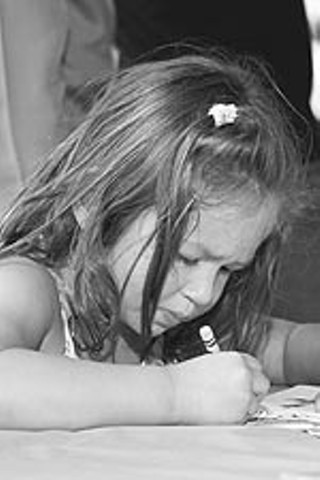 HAPPY 25 For a quarter-century now, By George has been the very thing that separates Austin from the animals. Ruling the fashion roost with the largest selection of the most stylish menswear, womenswear, shoes, and accessories, this winner of dozens of Best of Austin awards celebrates its 25th fabulous year by being named one of America's Top 25 Most Exciting Menswear Stores of 2004 by Cargo magazine and the trade publication MR, sharing the honor with venerated institutions like Barney's, Fred Segal, and Bergdorf Men. This is serious business for our homegrown fashion heroes, BG owners Matthew and Katy Culmo. Our congratulations to them on their incredible success.

QUEEN OF CLUBS I made an appearance on my dear friend Miss Kitty's AMN show Austin Dance Tracks (produced by fab DJ Nick Matthews), helping introduce videos at Sidekicks. Kitty's such a doll. I don't see her as regularly as I used to, so we had lots of gossip to catch up on. We dished about the club scene, as she rattled off names of places I'd never even heard of. I felt totally out of it. Sidekicks is a festive spot for happy hour; charming and entertaining bartender Thomas has quite a following, and Kitty and I became very chatty over a couple of his amazing Oatmeal Raisin Cookie shots, which taste like, well, you know, oatmeal raisin cookies. After a couple of these "cookies," even a clam would become chatty. Kittycat told me how proud she was that her dad, Jim Hooks, a Sara Lee exec, would be appearing on Essence of Emeril this coming Jan. 23 on the Food Network. With all due respect for her dad, she's the one who should be on camera on national television...

BACKCHAT Gossiping with my globe-trotting girlfriend Katy Gaffney, I was let in on the fact that she was attending a very intime little dinner at Kenichi last Friday with her companion Robert Walker, Anthony Camargo and Nak Armstrong of Anthony Nak, and Dennis Quaid and his bride, Kimberly. I was so envious, I choked. She was unrelenting as I tried every ploy in the book to get her to invite me, but the woman has ice water in her veins. Instead, I spent the evening gnashing on a triple-strand of pearls and watching The Rookie ... We'll have to see if Katy will let me share all the details.

WEIRDER THAN THAT I know that two of the words that my name is synonymous with are "fitness" and "health." Perhaps you can think of a few of your own. I try to fill each minute of every day with healthful activities. For example, when chain-smoking, I try and develop a rhythmic motion that tones and strengthens my upper arms. Furthermore, I've placed my skincare products on the highest shelf in my bathroom so I have to reach and stretch to get them, and have placed my workstation as far from the kitchen as possible so I have to walk a ways to get a snack. Regretfully or not, those, and the Social Olympics, make up my physical fitness regime. Certainly fitness and health could not have been on Baker Harrell's mind when he invited me to be a celebrity judge for the kids section of the Keep Austin Weird 5K Fun Run. I tried to decline gracefully, but Baker was having none of it. He so eloquently outlined every reason why I should be there, that I could hardly resist – my one stipulation being that he let me bring my Sister Margaret. He instructed us to meet him last Saturday at 5:30am at Auditorium Shores. Owning nothing resembling sporting clothes, I chose an all-black ensemble (well, it is the height of summer), consisting of my new custom-made silk shirt with silver buttons, black jeans, black suede shoes, golf hat, and the ever-present sunglasses. The scene resembled a science fiction plot gone awry – tanned, happy, athletic people as far as the eye could see all enjoying a concert in the sun. Baker, in a pink tutu, as our guide, my sister, and I traversed the park littered with golden, fit bodies. We stepped gingerly to avoid a well-toned, perfectly shaved limb here and there. I felt more like Scarlett O'Hara picking her way through the sea of wounded bodies at the train station. Baker's organization Youth InterACTIVE was in charge of the kids area called the Weird Zone, and we toured the area, filled with entertaining, well-planned activities for children, including my favorite, the Record Toss, designed by YI board member, DJ, and Feedback magazine publisher Damon Williams. As we made our way to the main stage where the judging was occurring, the fitness surrounding us was overwhelming. It was only as we took our places on the stage for the judging that I began to feel at home – out of the sun and into the spotlight. The awards went swimmingly, and judging from attendance, the entire event was an enormous success ... and I can now add Fitness Consultant to my résumé.