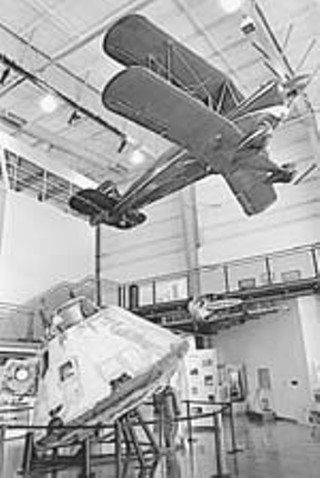 Exhibits at the Frontiers of Flight Museum at Dallas' Love Field say that manned flight began in 1849 when Sir George Cayley's coachman took a reluctant ride on a glider.

Bigger than a football field, the showcase of airplanes and displays in the giant hangar traces the evolution of air flight from da Vinci's conceptional drawings through modern unmanned spy planes. For a sense of perspective, a 46-foot-long T-38 Talon supersonic jet trainer with a 25-foot wingspan hangs from the rafters like a kid's model airplane.

Nearly every aspect of man's love affair with soaring is covered in the museum. Interesting facts accompany photos, drawings, and rare airplanes. In the exhibit on the Wright brothers' first flight in 1903, it is noted that Orville flew the plane at Kitty Hawk, N.C., because he won a coin toss with his brother.

Among the winged machines is a photographic display on the age of blimps. Before the Hindenburg fell to earth in a ball of flames in 1937, the lighter-than-air ship had crossed the Atlantic 20 times. At the time, the three-day and two-night flight was considered just short of amazing. The museum has the largest unburned piece from the Hindenburg, the radioman's chair.

Once the Wright brothers developed a way to control the flight and were granted a patent in 1906, it didn't take long for imitators to try to make a better airplane. By 1911 Cal Rogers was flying his Vin Fiz bi-plane across the country, with a stop in Austin, to advertise a soft drink.

On the other end of the spectrum sits the Apollo 7 capsule and an astronaut's empty space suit. In 1968, it was the first manned Apollo spacecraft since the ill-fated Apollo 1 mission killed three astronauts in a flash fire on the launch pad the year before. Although it looks small next to the sleek jets, the Apollo 7 module revived America's quest for space exploration.

Of course, no history of aviation would be complete without documenting the changes in passenger airlines. Who remembers NAT? Officially called the National Air Transportation, the airline with the motto "fly with the air mail" operated from 1926 to 1934. The colorful Southwest Airlines stewardess uniforms during the Sixties add a touch of humor to the exhibit.

Displays documenting the changes in military aviation fill about two-thirds of the museum. Retired military pilots and mechanics serve as docents, explaining how the planes fit into aviation history, often with personal anecdotes. Texas' role in U.S. airpower began with the first military flight from the parade grounds at Fort Sam Houston in San Antonio in 1910.

Seven years later, Love Field opened as a military pilot training station 7 miles west of downtown Dallas. Named for Lt. Moss Lee Love, an Army pilot killed in 1912, the airport served as a military airfield until it was sold to the city in 1928. The first flights ferried passengers to and from Houston and San Antonio. During World War II, the airport again became a military installation and housed one of the largest squadrons of the Women's Air Service Pilots before returning to commercial use.

The roar of jets taking off from and landing on the runways next to the building shakes the walls and almost makes the static displays come alive. The museum opened at the airport in 1988 in conjunction with the University of Dallas' History of Aviation Collection. In June 2004 it was moved into the new building.

A large section of the museum is taken up with the Experience Center, where children can climb on an airport playscape or watch cartoons about airplanes. Children of all ages enjoy the opportunity to try a flight simulator and discover the coordination of hands and feet necessary to control even a small plane, and to look into the actual cockpit of a 737 jetliner.

The Frontier of Flight Museum is north of Love Field's main gate at Lemmon and University streets. The doors are open daily from 10am to 5pm and on Sunday from noon to 5pm. Admission is $8 for adults and $5 for children. For more information, call 214/350-3600 or visit their Web site at www.flightmuseum.com.