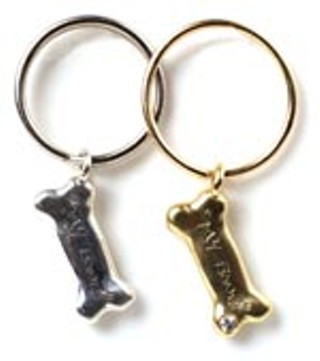 The My Bone dog tags in sterling silver (l) and gold set with a diamond (r) designed by Anthony-Nak for the ASPCA and available at MyBone.org

LE SCANDALE NOT Frankly, we've heard rumors for months now about a purported little incident involving Winona Ryder while she was here filming Rick Linklater's A Scanner Darkly. It all seemed so preposterous, so obvious, and there were so many variations on the story, that I wrote the whole thing off as a complete fabrication. But it is a story that will not die, and now I've heard that it's about to appear in US Weekly. Let's just lay the beads on the table, shall we? It was writer's intuition that made me ignore the story three months ago; good thing, it turns out. The gossip mill said that Winona was allegedly caught shoplifting at By George. Different versions state that the transgression occurred at either the Lamar store or the Guadalupe store. The stories allege that: 1) Either Winona left the store with merchandise she had not paid for and called the store afterward to admit it and return the merch, saying she had had a "moment," or 2) she tried to exit the store and set off the sensors with purloined merchandise in her bag, whereupon she had a complete meltdown, crying, "Omigod, I'm having a moment, I need my therapist! Call my therapist!" One story went so far as to say that Winona reached her therapist, who then spoke to By George's Katy Culmo, who decided not to press charges. "Patently untrue," says By George's Matthew Culmo, Katy's husband. Apparently it all started with an item in the New York Post's "Page Six," mentioning that Winona and Keanu Reeves were filming in Austin, and that local merchants should watch the "sticky-fingered actress," since she'd already been seen in By George. This funny but evil little item became the genesis of the rumor – and while it was delicious gossip, that's all it was. As with many stories of this kind, there is no kernel of truth in it.

GET YOUR PANTIES TO THE POLLS! How could I resist an organization called Running in Heels? With a chapter in Austin now, Running in Heels is a political action committee (Heels PAC) started by a group of women in Washington, D.C., to promote women's participation in elections and the government. Through cocktail parties, salon socials, and other typically apolitical methods, the group is mobilizing the high-heeled voter. Approximately 22 million single women ages 18-30 did not vote in the 2000 election, making them the least likely demographic to vote in 2004. To counter that unpleasant reality, Running in Heels is staging the Code Pink March (in reaction to the orange and yellow code alerts) on Thursday, Aug. 26, noon, at Wooldridge Park. The march to the state Capitol will commemorate Women's Suffrage Day (the passage of the 19th Amendment) and to highlight the need for women to get involved in the process and vote. With the stiletto heel as the logo for the campaign, attendees are asked to wear pink and high heels (ooohhh, be still my beating heart). Recently, various chapters held fundraisers such as the Wax Away Bush salon event and the Singles Against Bush Mixer event. They have bolstered their coffers with sales of panties printed with Kiss Bush Goodbye and Bush Free Zone.

OUR FOUR-LEGGED FRIENDS Our two-legged friends, Anthony and Nak, at Anthony Nak Jewelers have been commissioned by the American Society for the Prevention of Cruelty to Animals to design a My Bone doggie-bone-shaped charm to be worn on a bracelet or on a chain around the neck (or A.N. will solder it onto your dog's collar). The ASPCA Telethon airs Aug. 28-29 on KEYE-TV, and A.N. will appear on air Saturday morning, 10am, donating 250 pieces to the telethon, with the proceeds going directly to the Austin ASPCA. See www.mybone.org for details.

RUNNING FOR WEIRDNESS In yet another public appearance of the sister act of your Style Avatar and Sister Margaret, we will be celebrity judges in the Weird Zone (kids area) of the second annual Keep Austin Weird 5K Run. You know that if Margaret and I are attending, this is like no other run in town (the "water stops" will serve ice cream, doughnuts, and pizza). The event will benefit Barton Springs Pool, and the Weird Zone is being handled by our friend Baker Harrell, founder and executive director of youth InterACTIVE, a nonprofit organization promoting health and fitness through creativity. Featuring Austin's first Jell-O Food Fight, karaoke, kid bands, and various contests (such as "Craziest Costume" and "Best Willie Nelson Costume"), the Weird Zone will be the happenin' place at this uniquely Austin event. For complete information about the run, including the free concert, go to www.keepaustinweird5k.com. Film