Wanna know a 'Chronicle' secret? It runs in the family: Margaret Moser spends a lot of energy fantasizing being able to recast all the roles in 'Grease.' In this issue, Brother Stephen has some epiphanies over the possibilities of a modern remake of 'Valley of the Dolls'! 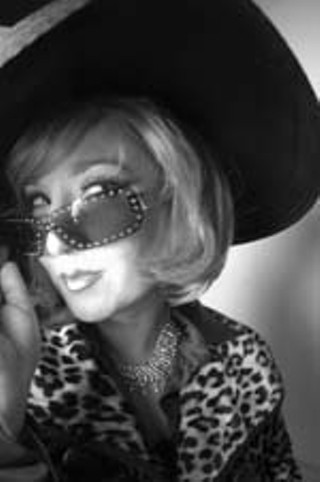 HEDDA THE GAME I must have had my head in the sand to not know about Hedda Layne, but now that I do know about her, so shall you. Hedda is one very singular sensation – a torch diva with classical training and a voice unlike any other. I saw her perform at the release party for her second CD at the always fabulous Oslo – her performance was searing and riveting, and she is dazzling to watch. Working with her husband, guitarist, and writer/arranger Troy Lee Warden, she is simply remarkable, giving new life to old standards and original works. It discounts her originality to say that she can evoke comparisons in some form or another to Billie Holiday, Ella Fitzgerald, Cyndi Lauper, Liza Minnelli, Annie Lennox, and Bette Midler, but frankly, if comparisons have to be made, then at least she's compared to some of the finest vocalists in the world. I'd like to see Madame Layne perform in a larger production that can encompass her commanding talent, and she'd be ideal for a supper club venue (though she did perform with the Austin Symphony Orchestra on July 4th). She is poised for great success and promises to steal your heart. See for yourself every Tuesday at Oslo, 7-9pm or Saturday, Aug 28, 8:30pm, at Red Fez (209 W. Fifth).

MUSICAL SHOPS I know this is all very complicated, but try to follow along (draw a chart if necessary). On the chic SoCo strip, word has it that 7 (formerly Lambert's) is said to be expanding into the Hairy Situations space, and Hairy Situations is moving into part of the old Terra Toys space, and Kid Genius, a local toy store, is moving into the other part (Terra Toys and Dragonsnaps have moved up to Anderson Road). The old Dragonsnaps space is now Mi Casa, uniting both of their stores into one large walk-through location, while Crofts Originals has moved into the old Mi Casa space. Five Oceans is moving into the small space that had originally been part of Aqua, which was most recently known as Las Manos Magica. Aqua is moving up to North Lamar. Part of the late-lamented Cush Cush space on 12th and Lamar has been taken over by Kathy Brandt of Fetish, who is opening a new store called Underwear. Mint Salon is opening a women's exercise footwear and apparel store called Bettysport in the other part of the Cush Cush space. On Fifth and Lamar, Anjely is gone, replaced by a Vespa dealership. Zanzibar has expanded the old Cities space, and Sabia, under new ownership, is moving from that location to South First (a stylish stretch of boutiques, salons, and assorted businesses between Barton Springs and West Mary that we may henceforth refer to as "SoFi"). The glamorous Starlite restaurant is moving to the old Crimson location (née Gilligan's) next to the Alamo Drafthouse downtown – which is slated to open another location on South Lamar within the next year or so. Got it? How this all shakes out, only time will tell.

REACHING FOR THE STARS

Certain names appear in this column regularly, like Anthony-Nak Jewelers and Kat Jones of Milkshake Media, because I believe in touting their spectacular international achievements. So on that note, here's some more delicious dish: Tiffany & Co. is setting itself up as the world's foremost authority on pearls and is launching a new collection called Iridesse and a huge campaign to promote that. Anthony Camargo and Nak Armstrong will, natch, be designing some of the jewels, and Milkshake Media will spearhead the campaign. Wow-ieee, those are big achievements, and we are so fortunate to be having it happen right here in Austin!

THE VALLEY OF THE HO HO HO I have to admit to very mixed feelings about the remake of Jacqueline Susann's Valley of the Dolls, directed by Betty Thomas (The Brady Bunch Movie, Dr. Dolittle, 28 Days). Thomas does indeed have a certain sense of camp that will be a requirement for anyone directing this remake, and it has every possibility to be a mow-'em-all-down, over-the-top production. On the other hand, I also just heard that Christina Aguilera turned down a role in it. It could have been wretched, but it also could have been fabulous – imagine Britney Spears as Anne Welles, Jessica Simpson as Jennifer North, and Christina Aguilera as Neely O'Hara (or in my Editor Kate X's parallel Fox-fueled fantasyland: Mischa Barton as Anne, Paris Hilton as Jen, and dueling divas Mary-Kate and Ashley Olsen sharing the role of Neely), all clawing their way to the top, each of their lives being affected by "dolls" (though no one, except fans of Jacqueline Susann, ever referred to sleeping pills as "dolls"). Today, with other drugs far more prevalent than sleeping pills, instead of hearing Neely O'Hara wailing, "I need a doll!" we can expect to hear her wailing, "I need some crack!" or "I need an OxyContin!" Sounds like a recipe for disaster – but if it's to be disastrous, let's at least hope it's disastrous on the level of Showgirls, which immediately catapulted itself directly into the Camp Hall of Fame.