Has your style avatar Stephen found religion … or just joined a cult? 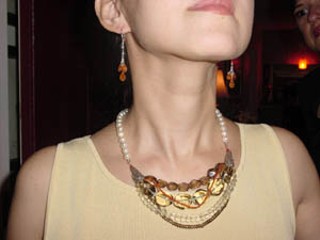 HEADY JEWELS We are not lacking in fine jewelry designers here in Austin – in fact we have jewelry coming out of our ears, so to speak. But few designers have the skill and experience behind them that Kevin Heady has. Heady began his designing career 23 years ago after being trained as a metalsmith, creating in gold, sterling, and platinum, with custom and commissioned pieces of hand-fabricated and cast pieces so remarkable that they wound up on display in both the Museum of Modern Art in New York and the Museum of Fine Arts in Houston. His career has also included many years of working within the wholesale fashion industry, and after seeing a growing need for upscale contemporary accessories, Heady has returned to the design arena, launching new collections of jewelry for today's fashion-oriented clients. "I've tried to design pieces that have many varied elements that intrigue and engage the consumer ... rubber, leather, sterling, 14k, platinum, pearls, semi-precious as well as precious stones," says Monsieur Heady of his largest group, the Heady Collection. The affordable pieces, retailing from $30 to $400, are available in necklaces, bracelets, and earrings. Another group is called Garnet, an elegant yet fun range of designs fabricated in sterling, 14 karat gold, semi-precious stones, and knotted pearls. These pieces, very limited in production, begin at $250. They can also become one-of-a-kind commissioned works. Heady's newest series is the totally customizable They're Knot Your Mother's Pearls, comprised of two strands of pearls, one of which is 7-7.5 mm white, and the other is either baroque or natural pastel pearls paired with gemstone and pearl strands (purchased separately) that hook into a special clasp in back. Following that, the next group to be released will be more ornate and geared toward Holiday/Cruise (that's what insiders call the post-autumn/pre-spring marketing season) and will include the 14 karat earrings shimmering with blue topaz, peridot, and iolite clusters as well as the citrine, golden citrine, and grossular garnet. To find a retailer near you, or to carry his work in your retail location, contact him through www.kevinheady.com, where you may also inquire about having him design a custom piece to complement a favorite outfit or make that special occasion truly unique.

KABBALAH KLAPTRAP Why can't they just leave the ancient, well-respected, and deeply spiritual alone? Well, the way things are going, it will soon be impossible to find a celebrity who has not fallen under the über-trendy spell of the Kabbalah. (Whenever I hear about it, I always recall this weird board game that my brother had circa 1967, called Kabbalah, with a mechanical apparatus so creepy looking that we never did get around to learning how to play it.) Madonna, in her never-ending quest for the new and unusual, has brought the same major attention to this particular spiritual altar as she does every time she reinvents herself. I adore Madonna and have worshipped at her feet for 22 years, but while her whole new persona as devoted mother/wife/children's book author is a little hard to take, Madonna-as-guru is an impossible pill to swallow. I may have gotten around to smirkingly referring to Sean Combs as "P. Diddy," but I will never get around to calling Madonna "Esther." Even if she asked me personally. "Madge," I'd tell her (I love calling her "Madge"), "when I think of the name Esther all I can think of is that dreadful character Barbra Streisand played in A Star Is Born, Esther Hoffman Howard, screeching like a harpy and urging us to 'Watch closely now.'" Surely, in the face of that image, Madge would cool her jets and rethink this Esther business. The red string bracelet that she sports as a symbol of her conviction is now ubiquitous. Britney Spears sports one, and it is widely rumored that she will have the first celebrity Kabbalah wedding (should be a lovely mixture of cultures – ancient traditions performed with a rural Louisiana trailer park feel to it). Unfortunately the bracelet provided no protection for Russell Simmons' wife, Kimora Lee, who was wearing one in her mug shot photos after being arrested for assorted traffic violations as well as possession of marijuana. With devotees such as Madge, Spears, and Demi Moore turning the bracelet into a fashion accessory (you may now purchase them at Target), there's no question that within six months, the 4,000-year-old teachings of the Kabbalah will become sooo 2004 – discounted to the level of the Moonies and completely passé. But perhaps the true depth of the celebrity devotion to the Kabbalah can be summed up by Paris Hilton, who was quoted in the fabulous www.popbitch.com as saying, "I was getting my make-up done, and it just hit me: I love Nick [Carter], but I need time alone. I called my psychic, and I asked her opinion ... (then) I went straight to the Kabbalah Centre and got a new bracelet ..." – and probably some shoes and a purse to match.