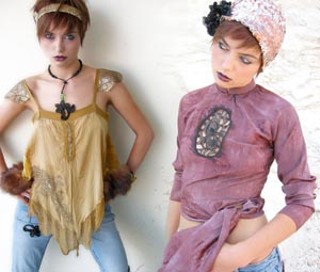 SOCO SALES FactoryPeople's summer sale has been going on for the past week: 25-50% off everything! And now pieces are slashed even further. Run, do not walk, and get your favorite cutting-edge designs dirt cheap ( www.factorypeople.com). Speaking of dirt cheap, swing by Gomi, where they've cleaned out their warehouse of their remaining stock of shoes (from when they used to carry shoes).

OMG I'm breathless! Joan and Melissa Rivers have been banned from the Emmys! Why, it just won't be the same without the embalmed Joan and her mysteriously famous daughter there to scald the stars. While they were lured away from E! earlier in the year by the TV Guide Channel (perhaps they were between contracts), E! has the upper hand by owning the preshow rights to not only this September's Emmy Awards, but 2005's as well... In other trashy news: Rumored to have had a recent dalliance with a model from the UK, the loutish Justin Timberlake is being vociferously defended by girlfriend Cameron Diaz, who told US Magazine, "Some stupid bitch in London wants fame and is telling lies about Justin. He's a good man. We are solid and I love him." That's not the only battle Diaz has had to fight lately. The recent surfacing on the Internet of what is allegedly her soft-core performance in a fetish video from the early Nineties (rather like that what's-her-name from Joe Millionaire). Cam has her attorneys working overtime on that one. Poor baby! She's just a hard-working girl with a dream, and I'd be more than happy to help her get past her reputation for dressing like trash, if only she'd return my calls... The fabulous Ben Widdicombe's "Gatecrasher" column in the New York Daily News tells us Sean John/Puff Daddy/P. Daddy/P. Diddy Combs has ordered his staff to clam up about an alleged theft of $7 million in jewels (mostly borrowed, it's said) from his NYC office. Asked who designed the jewelry, Combs said, "The only jewelry I wear in the whole wide world is from my man Jacob the Jeweler; I've been dealing with him all my life." Kind of conjures up a cute little image of Combs as a little tyke crawling down to Jacob's and buying his very first solid-gold teething ring.

A DIFFERENT QUEEN The always fabulous Pink Salon's Deborah Carter has taken another daring turn by opening an in-store Boudoir Queen boutique and atelier. Boudoir Queen designer Dawn Denton not only displays her goods – her signature doll-head purses, jewelry, accessories, restyled vintage, embellished jeans, along with original work – but her workroom is set up there as well, so you can see the designs being executed. While Denton's approach of reworking vintage garments is not particularly original (in fact it's been seriously popular in town for quite a while, thanks to the work of local designers such as Sunny Haralson and international designers such as Imitation of Christ), she possesses an eye that takes the approach to a different level, creating raggedly romantic tops and dresses. By nature, each creation is one of a kind, often utilizing combinations of beading, fringe, trim, feathers, flowers, fur, or lace, and the result can be utterly enchanting. Singer Patty Griffin is a devoted fan, wearing Boudoir Queen clothing and accessories for many public appearances. In addition to Pink Salon, Boudoir Queen can be found at the Garden Room, and other locations, and through Denton's fascinating Web site ( www.boudoirqueen.com). Her collection of rare, whimsical and radiant boudoir dolls from the 1920s is famous, and she offers some of it, as well as a hand-picked selection of vintage decor and home accessories for sale on the site. A California transplant, Denton has a lengthy history in various areas of fashion, including a stint as make-up artist to the stars, working with such celebrities as Lisa Marie Presley, Chynna Phillips, Tyra Banks, and Lauren Hutton. She is married to the former guitarist for Billy Idol, Mark Younger-Smith, who has also played for Joe Cocker, Charlie Sexton, Patti Smith, and many more. Inspired by her husband's rock & roll accomplishments, Denton's independent spirit, entrepreneurial drive, and dedication to exquisite vintage are evident in her work and should help carve quite a niche on the chic SoCo strip. Stop by and see her in action at Pink Salon, 1204 S. Congress ... and also check out Judy Masliyah's new collection of fabulous summer dresses while you're there.

A REALLY BIG DEAL Our friend, the debonair philanthropist Gary Cooper, reports that AIDS Services of Austin received their check from the proceeds of the Hill Country Ride for AIDS: $69,356.65, over 50% more than last year, and only a portion of the total monies raised by the famous ride!