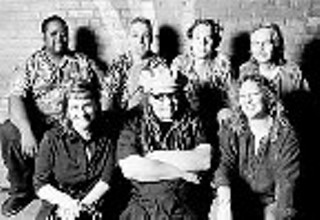 Oh, Jesus fucking Christ no, please God, not another SIMS benefit. Don’t they have enough money already? That’s what you’re thinking, isn’t it? Or maybe you’ve read the fine print enough times to know what the SIMS Foundation is: A nonprofit organization providing access to low-cost mental health services for Austin area musicians and their immediate families. SIMS (Services Invested in Musician Support) is some seriously nutty (excuse the pun) anagrammatic gerrymandering unless you are also clued into the fact that the foundation was named after Pariah bassist Sims Ellison, the Foundation’s raison d’être, who committed suicide back in 1995. Sims was by no means the first or the last musician to leave the building, so to speak, but his death may have helped save the lives of countless others by urging the living to do something for musicians other than ponying up a cover charge. Musicians by nature are a mentally fragile lot, prone to depression, insomnia, paranoia, and in some rare, rare cases, delusional, cataclysmically bloated egos – and those are generally the healthy ones. This is no huge surprise to anyone; of all the arts, music is the most emotionally charged. It’s all about nuance and groove and feel. Sure, there are the lyrics and the dry Pythagorean math of rhythm and scale, but music speaks much more eloquently to the heart than the mind. Musicians, being the medium through which all of this feeling flows, sometimes find that stepping off the emotional roller coaster is much more difficult than staying on. Some turn to drinking, some to drugs, and some to a staggering number of meaningless sexual encounters. Sounds pretty cool, huh? Actually, for the majority of musicians, the ups and downs are far more pedestrian: paying rent, being away from family and friends, dealing with the withering daily drag of rejection, disillusionment, and self-doubt. So why should you ante up for the mental health musicians rather than, say, pipe fitters? Here’s why: The likelihood of one of your friends or neighbors being a pipe fitter is pretty negligible, but you can bet your ass that at least one or more is a musician or a member of a musician’s immediate family. For instance, this Sunday, Threadgill’s is hosting Red, White & Americana, a benefit for the SIMS Foundation and KOOP radio that features no fewer than 11 bands/artists. Get out your calculator. The mathematical probability you’re a friend, relative, or neighbor of one of these bands is pretty huge, especially considering that you’re a Chronicle reader. Here’s who’s throwing down: Loose Diamonds, Austin Lounge Lizards, Imperial Golden Crown Harmonizers with Miss Lavelle White, Kings of the Motel 6, Bonny Holmes Combo, Nick Connolly, Blue Diamond Shine, Skeleton Crew, Walter Tragert, Chrissy Flatt, and Molly Venter. In other cities of lesser intrigue, you might expect to pay a whopping, jaw-dropping sum to see this many bands, but all you have to do is donate $10 to get into this deal, so it’s like you’re not even paying at all. Not to mention that Loose Diamonds doesn’t kick it all that often anymore, at least not as a group, and if you haven’t heard Miss Lavelle or Walter Tragert sing, you may not recognize the sound of angels when you get to heaven. The Austin Lounge Lizards are both an institution and institutional, but highly entertaining either way, and the Kings of the Motel 6 have a guitar player named Hurricane who will, yes, blow you away. Who’s really benefiting here?