Queer Eye for the Austin Guy 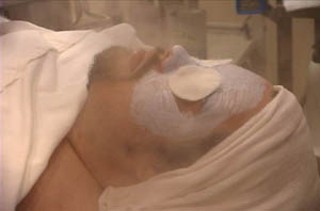 Beauty by Bella: Our subject, Dreux, submits to a facial and waxing as part of his makeover. (Photo By Dave Rehm)

FAB FEW! Earlier this year, I worked with my good friend Katy Gaffney and the auction committee for Austin Film Society's Texas Film Hall of Fame fundraiser. One of the auction packages we put together was a Queer Eye for the Austin Guy package, where we offered, under my supervision, a head-to-toe makeover for the winning bidder, all captured on video for an independent documentary. We arranged for a number of local gurus and establishments to donate services, goods, and gift certificates. The package did very well, raising a tidy sum for AFS, and was purchased by Mary LaViolette for her son, Dreux. Dreux is an electrical engineer who just bought a home with his fiancée, a doctor. He would be attending a wedding in Las Vegas the following week, so that gave us a specific event for which to plan his new look. Dreux had already received opening night tickets for The Full Monty ("Culture!"), donated by the UT Performing Arts Center, and a gorgeous $5,000 leather chair and ottoman was delivered to Dreux's home, donated by the Homeworks store in Tarrytown ("Design!"). Joel Mozersky, the "it" interior designer these days, donated his expertise. Together, we met our camera crew – Marci Winters-Allen, director/assistant editor; David Rehm, cameraman and editor; and production assistant Eloisa Camero – at Dreux's north central home. The home itself was an unremarkable two-story affair; since Dreux and his fiancée had just moved in, they were starting fresh. Joel gave tips on using what Dreux already had. We then took a look at Dreux's wardrobe ("Fashion!"): perfectly arranged row after row of cargo shorts, T-shirts, and athletic shoes. Not an unusual assortment for a young Austin guy, but definitely a fashionista's nightmare. Decisions had to be made – among other things, a shapeless old polo shirt had to go – sentiment be damned! His wardrobe needed color and variety. We picked up our limo for a jaunt into style-land. Our driver from Carey Limousines, Carnell Wilson, was straight out of central casting. Dapper and perfectly groomed, he provided expert service, having looked up all the addresses in advance, knowing exactly where to go. While we planned our attack, Joel and Dreux went to Award and Zanzibar looking at furnishings and accessories. Our first stop was Napa Home on South First, where we shopped for everything from candles to bed linens. Owners Julia Elam and Randy Phillips were incredibly gracious as Dreux selected a decorative and functional ceramic bowl, as well as a decorative box covered with cowhide. From there, Carnell took us to Paper & Ink on Congress, where owner Kelly Fielding displayed her exquisite selection of stationery, pens, and accessories. Dreux selected personalized note cards in cream and navy blue (for those occasions when an e-mail just won't do). Afterward, it was on to Bella Salon on West Sixth ("Grooming!"). We put Dreux in the hands of Anissa McGlynn first, for a facial and waxing. Dreux's skin was congested, and Anissa performed treatments to alleviate the condition, and we did not hear the expected scream as she yanked the wax from between his brows. Steven Taylor was our expert for hair – cutting the hair and directing the color. Dreux had a shagginess to his hair that suited him, but it was an uncontrolled shagginess that Steven tamed, providing Dreux with products and instructions. Steven instructed Erin Jantzen on what he wanted to see, and Erin produced warm, but not-too-obvious highlights that worked to improve Dreux's cool coloring. While the color was processing, we were treated to a delicious lunch in Bella's charming cafe, and when we left, Dreux was already looking more confident. Carnell took us over to By George for outfitting. Menswear guru Scott Butler guided Dreux, indicating the versatility of the pieces and suggesting ensembles. Dreux modeled, and we selected a dressy-casual look consisting of a pale plaid shirt by Paul Smith, a "ringer" T-shirt to wear underneath, a pair of sage-colored cotton trousers, and sandals. Look out, Vegas! At last, Dreux was ready to be presented to his friends and family at a wine dinner ("Food & Drink!") provided by Grape Vine Market at their wonderful store. Abounding with fabulous wines and delicacies, Grape Vine presented a royal feast for Dreux and his guests. Dreux, you were such a good sport throughout all the probing and picking. What fun in the name of charity!

On a sad and personal note: The Austin Chronicle and "After a Fashion" extend our deepest sympathies to the family and staff of Grape Vine's owner, who was killed in a plane crash last week.