Luv Doc Recommends: Rock and Roll Free for All 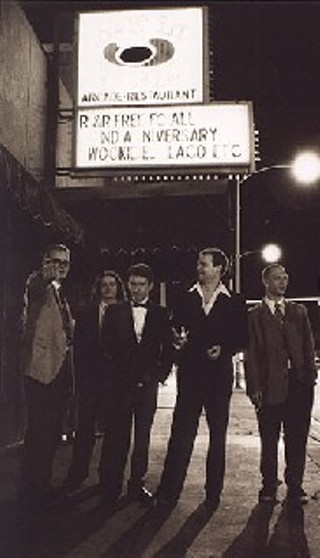 One thought that undoubtedly has been troubling you for the past week is, “Will the death of Ronald Reagan open the floodgates of Eighties nostalgia?” Could this perhaps be the Great Communicator’s real legacy? Will the remainder of the oughts be the era in which Eighties retro becomes the backlash to Seventies retro? Will Dexy’s Midnight Runners finally become a two-time one-hit wonder? Will Adam Ant drag his two drummers out of mothballs and mount a glorious comeback tour? Will Boy George come back as a geriatrically androgynous Man George? Will MTV and VH1 actually start playing music videos? Will blue jeans climb back toward the navel? Will pant legs narrow? Will cotton farmers rejoice? Will Ecstasy be legal again? Will gas get cheaper? Will hair get bigger? Will bangs get mallier? Will fraternities grow larger? Will Tom Cruise once again dance to Bob Seger in his underwear? Will it be hip to be square? Will the nerds finally, truly get their revenge? OK, yes on the last one. With Bill Gates and Michael Dell owning most of the known universe, it’s pretty obvious the nerds have gotten all the revenge they want. Could the rest be far behind? Maybe not, but let’s keep our fingers crossed on that Ecstasy thing…and maybe the gas…and really, can you ever get enough of “Come on Eileen”? Especially if you’re on X? Admit it. The Eighties brought us a lot of fun stuff: Water Slides, Frisbee golf, skateboards with fat wheels, boom boxes, video arcades, Cabbage Patch Kids, Teenage Mutant Ninja Turtles, The Lost Boys and Bill and Ted. None of it was necessarily cool, mind you (OK, maybe the skateboards), but Bill and Ted…that shit was funny, yo. Cool can be such a drag anyway. Really, how long can you stare at that Escher painting of the dogs playing poker? Locally, the Eighties were a veritable renaissance for the music scene. Some of the biggest names in Austin music hit in the Eighties: Timbuk 3, Lyle Lovett, Nanci Griffith, Michelle Shocked, the Fabulous Thunderbirds, Stevie RayVaughan, the Butthole Surfers, Dangerous Toys … not to mention SXSW started in the Eighties and even … yes … The Austin Chronicle. Good times, eh? Sunday night you can relive some of that magic at Paul Minor’s Rock and Roll Free for All at the Hole in the Wall. This month the Hole celebrates it’s 30-year anniversary (yeah, there was a little hitch in there, but who’s counting?) with another “30 Days in the Hole,” featuring many of the great acts that made and make the Hole in the Wall an Austin landmark. Sunday’s show features Two Hoots and a Holler, Shandon Sahm, and of course, the Superego All-Stars. Two Hoots was arguably Austin’s premier club band during the latter part of the Eighties, regularly packing venues like the Black Cat and the Continental Club. Even today, following Two Hoots onstage is an exercise in masochism for even the most ass-kicking band, but Shandon Sahm is up to the task. Sahm, son of Texas music legend Doug Sahm and drummer for Eighties metal gods Pariah, has switched to guitar these days and is still bringing it full volume. Closing out the evening, as usual, will be Texas Music Hall of Famer Paul Minor and the Superego All-Stars. Minor got his start in the Eighties with bands like the Urge and Roman Candles, but perhaps his biggest contribution to Austin music is his creation of the Rock and Roll Free for All, a Sunday night band jam that has helped spawn a number of notable acts, including Spoon and Fastball. Sunday night (and incidentally every night these days at the Hole) there is no cover, but it is nonetheless a benefit for a Hole in the Wall regular named Gayle who was recently displaced by an apartment fire. You remember. We are the world. Check your ego at the door.