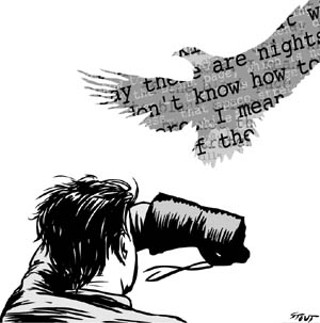 In replying to my friend's letter, I realized I was writing a column as well, so ...

There are nights when I don't know how to write anymore. It's not "writer's block," I don't believe in "writer's block." When the writing doesn't come there's a reason, and a pro learns to respect the reason and to hold him or herself in readiness while the reason takes the space it demands in order to reveal itself. You go to your writing table at your appointed time no matter what, to do whatever it is you do there when you're not composing – stare, smoke cigarettes, drink tea, pace, whittle (Hemingway would sharpen his pencils with a penknife); you endure the appointed time, however much time you give; if you're me, you also play your "writing music" (I always write to music – with the columns it's usually Charlie Parker or Lester Young); and you wait. You're not composing words, but you're making yourself available to that ineffable thing in you which writes. As my friend Dave said when we were young, "The best that you can do is to give it your attention." Each day, the writing that is to come has moved closer to you; you know this because you've respected the space and time that it demands. You don't mope, you don't whine, you don't get silly, and you don't quit. (But maybe you get crazy. Everything costs.) Sometimes that goes on for days, even weeks; once (with a novel) it was three months, but nothing's "blocked," something's moving under it all, under your chair, inside and outside you, and gradually that movement is felt on the surface and then finally shows up where you can reach it; then the words come and come quickly and you practice your craft with the words as you've practiced it all along when they held back.

(Of course, writing the column I don't have that luxury. Somehow the deadline must be met, so, well or ill, distraught or calm, you wring it out of yourself. Collapse when it's over, your consciousness a pile of disconnected bits. Next day you feel like you've been in a car wreck. But as Hannah once said to me, "When you write you're having the time of your life no matter what's going on," and she's right.)

But none of that is what I'm talking about when I say there are nights when I don't know how to write anymore. I mean that the space of the blank page, which is now the blank screen – the means change, but not the blankness – that space stretches out ahead like those white spaces on ancient maps that stood for what was unexplored. Sometimes in those spaces the map writers lettered these words: "Here there be soul-eaters." That space stretches out and I don't know how ... the unsayable cries out to be said and there's no way to say it. Yet all that's said rests upon, and is surrounded by, the unsayable. I mean that there are nights when the unsayable comes so close and is so powerful that I'm stripped of all my skills, all the craft acquired over all these years. And then I'm a boy again, 16 or so, when my Olympia manual portable typewriter was new. (I wrote on that machine until I was 42; it's so worn it can't be fixed anymore.) I'm a boy, the unsayable is close, and all I have to meet it is the desire to say. Nothing else. And then every word is a new, simple, lovely yet unwieldy object that I don't know how to hold, don't know where to put, and on the page these objects seem to knock against each other. I cross them out, erase, and have to rediscover, reinvent, the rhythm and sound, even the vowels and consonants ... and the words trail off ... for all you're trying to say, maybe all we're ever trying to say, stripped that way, is that every person and creature and plant and stone and object is a mystery, and that you are a mystery amidst all those mysteries, and all exist within a greater mystery, and even that greater mystery exists within one still greater, and that nothing will ever be solved or resolved. It is that labyrinth of mysteries, and not (as Freud thought) death, that civilization exists to deny and defend against ... a mystery in which horror and joy are equals, familiars, on equal terms, are perhaps the only equals ... That, and this: that the unexpected always happens and, as your father once told you, change is the only constant. Am I babbling? As I said: It's unsayable.

All of which is by way of quoting back to you, Kathleen, from this first letter from you in over a year, your words which so gracefully encompass the unsayable: "I rode my bike home from work yesterday and as I passed a field, a bald eagle was circling only about 20 feet overhead – big, broad breathtaking effortless circles – and so close I could not only see details of his feathers and eye, but I could feel him, feel his attention, feel the suddenness in his easy grace. It was as though he made the air he passed through alert. Then, with a beat of his wings he launched himself up the river valley toward the distant mountains, covering miles in a heartbeat."

When I read that, I repeated that Chippewa woman's poem, name unknown, translated by Bly, who worked from a translation of Frances Densmore: "Sometimes I go about pitying myself,/and all the time/I am being carried on great wings across the sky."

And the line I say so often to myself now as I get older, often enough for it to be a mantra – Ikkyu, of the 15th century, rendered from the Japanese by John Stevens: "Entrust yourself to the windblown clouds and do not wish to live forever."

Which is like a passage further on in your letter: "I can only relate it to a desire, a thirst for shattering the perceived knownness of life into the broad, sometimes startling, sometimes vagrant, unknown, no matter at what cost. There's a melancholy that's part of the family makeup and legacy – a dreaminess, a separateness, and a great longing which is sometimes a piercing joy and sometimes a night of knives. And through which my grandmother's voice still speaks. I don't wish my life to last longer than is useful, but I hope my heart continues to speak in my grandchildren when they need it."

That stopped me, created a silence all round me. I have no blood-children and will have no grandchildren. What you have said of your family is true too of mine. Now, on my father's side, at 58 I am the oldest male Ventura of my clan; on my mother's side, I'm the oldest male Scandurra. Eldest of the clans. (I think of Pound's line: "Frail Cino, strongest of his tribe.") But I will speak in no one's blood. Perhaps that's part of why I love to teach (I'm teaching a 10th-grade poetry class now, Whitman, Dickinson, Akhmatova, Machado, Bly, Rilke, Ikkyu, Poe, Dunbar, Keats, Millay, among others) – that my words and the words of these poets will continue to speak in my students when they need it. Odd, but I don't feel that about my writing. I have no expectation that my writing will live a day longer than I do. But experience lives on, what we experience together lives on, and so their experience of the poetry, and perhaps of how I've taught it, will live in them as the experience of my best teachers has lived in me all these years. It's that thought, illusory or not, that makes me feel something like a grandfather – a fine feeling.

In this mad time, when, as the Swedish poet Tomas Transtomer writes, "a helmet worn by no one has taken power" (the best description of Bush I know!); in this time of chaos, contradiction, and violence, when we feel like ricochets in a labyrinth (New Agers fond of meditating upon labyrinths forget that in the labyrinth is the monster Minotaur, which intends to devour us) ... in this terrible time, how we share and cherish our experience of each other is what will feed the best of the future. Of course you know that; it's in what you wrote of your friend Amel, the North African dancer:

"She knows her family tree going back for centuries, to the patriarch who brought the family to its present location – he had a dream in which he was told to move his family (which is essentially the whole village) across the desert to a place that would be revealed to him, so he had everyone pack up and start walking. After quite a journey, they came to an oasis, and everyone was overjoyed that they could stop walking and settle again. That night, he had another dream that just said, 'This is not the place – move on.' So they did – which must have been a frightful task, much harder than when they first set out on the journey – until they came to another oasis and were allowed to remain, and they thrived. But the hardship and sternness and purpose of that dream phrase – 'This is not the place – move on' – has become a touchstone for me. That, and gratitude. That, and remembering again, when I forget, which is often."

Thank you for your words. I needed them. With love, Michael.