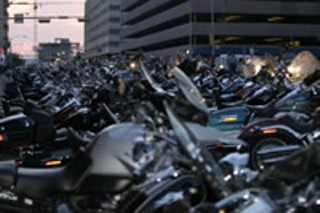 If you decided to pitch in for the environment last night and leave your bedroom window open instead of running the AC, you no doubt were audience to a flatulent symphony of sputters, pops, and rumbles. No, your window isn’t a portal to Sturgis, S.D., or a wormhole to Daytona Beach – what you’re hearing is probably just a fraction of the 40,000 steel horses riding into town this weekend for the Republic of Texas Biker Rally. It goes without saying that the ROT is the largest biker rally in Texas, but it’s fast becoming one of the premier biker events in the country. What luck! Thousands of bikers are just the ticket for an edgy town looking to keep itself weird – hairy-knuckled, broken-toothed, beer-gutted guys with names like Mongo, Skeet, Slick, and Crash; leather-skinned biker mamas sporting leather thongs, blue-feather roach-clip earrings, and sleeveless T-shirts emblazoned with phrases like, “If it’s got a dick or a kickstand, I can ride it,” or “Ain’t nothing like an 800-pound vibrator.” Scary to be sure, but Austin is by no means some remote Rockwellian hamlet poised to be ravaged and debauched by the wild ones. We’re the home of Leslie Cochran, Jennifer Gale, Katzen and Enigma, and that little Jesus-looking dude who sells flowers down on Sixth Street. We’re strapped and ready. Loose the dogs of the apocalypse. OK, maybe the preceding was a bit hyperbolic. Bikers, by and large, are the salt … nay, saltines of the earth. They come from all different walks of life: boardwalks, sidewalks, perp walks … but they’re all joined by a mutual love of freedom, speed, the open road, and the feel of rumbling power between their legs – essentially everything decimated in the final scene of Easy Rider. Check your Cliffs Notes, it’s all there. The difference is that these days the demographic is a bit more Viagraphic and the bikers look more like the Sheriffs. In fact, the modern Hawg rider is more often than not a granddaddy in the throes of a late-life crisis, meaning that the heyday of the Harley is still the Sixties and Seventies. For about the price of a midsized sedan, pops can cheat death daily on a huge metal crotch rocket. Think about it: biker gangs with pension plans. Weird enough for ya? Hold on to your chaps, Captain America, this year’s Saturday night headliner is none other than Hank Jr., he of – most recently – Monday Night Football fame. Could it be that finally bikers and the American Broadcasting Corporation have something in common? What next? Jimmy Kimmel? If nothing else, Hank Jr. does share with many bikers the experience of having his body smashed to pieces in an accident … oh, and the saltine thing. Ain’t nothing wrong with Hank Jr., but the safer bet is a voyeuristic stroll down Sixth Street to Congress on Friday night to check out literally thousands of Hawgs and other riffraff decked out and polished to a fine sheen. This stuff is truly art – an inspirational paean to the beauty of chrome and metallic flake. At around 8pm, give or take, the Friday Night Bike Parade will thunder down Congress Avenue followed by a free concert featuring the Georgia Satellites, Jibe, Podunk and Guppies from Outer Space. That oughta get your motor running.