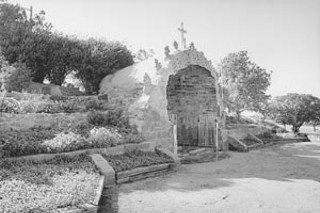 St. Mary's Grotto in Windthorst isn't your normal piece of modern sculpture. Even as religious structures go, this man-made cave is rather unique in its simplicity. Besides the shrine's statement of faith, it is art by the people for the people.

The most striking feature of the rock structure on the side of the hill under the towering red brick church is how solid and yet rudimentary the construction is. Parishioners donated the materials and their time to construct the approximately 30-foot-wide and 20-foot-tall opening made to look like a natural opening in the hillside.

The democracy of the project resulted in a shrine with few right angles and few matching pieces other than the native red sandstone and pink granite from the Oklahoma mountains. The concrete mortar is decorated with marbles, colored glass, and shiny rocks. To give the structure the appearance of a cave, 10 misshapen stalactites hang from the ceiling over the altar.

Nicknamed "Our Lady of Highway 281," the shrine was dedicated in 1950 to Our Lady of Perpetual Help in honor of 64 veterans of World War II. When the war started, 20% of the rural community's population went off to fight. Miraculously, all returned, with only four wounded. During the war, the soldiers sent home a portion of their paychecks to fund the $4,000 construction costs, which mostly went to purchase the 5-foot marble statue from Italy that is the centerpiece of the shrine. The grotto has been rededicated to all veterans in the area.

About 25 miles south of Wichita Falls and 10 miles east of Archer City, Windthorst was settled in 1891 by German Catholic immigrants. The town was named after a German statesman. The community population peaked in 1977 with 1,000 residents but has dropped to fewer than 500 in recent years.

While oil and gas have fueled the local economy, dairy farms are still the predominant family business of the area. The Windthorst General Store, at the intersection of U.S. 281 and TX 25, is one business that serves as a magic time machine. Established in 1921 by the Weinzapfel family, the store still serves as part grocery, part hardware, and part department store for the community.

The tradition of grottos probably has its beginnings prior to the Middle Ages in Europe, when pagan religions used caves as sacred places. Christians appropriated many of these sites and decorated them with statues and other holy objects. At some point people began to construct artificial caves as religious shrines. Grottos can be found around the world, being used by many different religions.

Remarkably, upper Midwestern America has the largest concentration of grottos in the world. The availability of inexpensive concrete has inspired usually conservative German Catholics to try their hand at architecture and art. The most famous of these is probably the Dickeyville Grotto in southwestern Wisconsin. The massive structure, made of shells, broken plates, colored glass, polished rocks, and all kinds of other materials, is actually a network of several grottos and shrines.

The "mother of all grottos" takes up a city block next to the Saints Peter and Paul Church in West Bend, Iowa. A parish priest promised to build a shrine to the Blessed Mother if he recovered from severe pneumonia. He worked on the nine contiguous grottos for 42 years, until his death in 1954.

In Texas, it is not uncommon for Catholic churches to have small grottos or shrines on their grounds. Perhaps the most famous architect of grottos in the state was Dionicio Rodriguez, a Mexican national who immigrated to San Antonio in the 1920s. Rodriguez perfected a secret process by which he hand-sculpted chemically treated reinforced concrete so that it looked like wood.

Besides producing bridges, fountains, benches, and lampposts in San Antonio's Brackenridge Park, Rodriguez is known to have produced several small grottos and shrines for individuals. His most outstanding construction project was a massive grotto in Memorial Park Cemetery in Memphis, Tenn. Other examples of his work can be found around the country. A fence he built around the old Alamo Cement Company can still be seen at the Stone Werks Caffe and Bar at 7300 Jones-Maltsberger in San Antonio.