The Lessons of Guernica 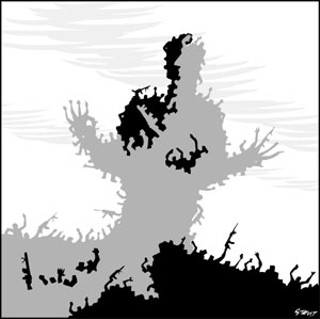 Look at Germany and the United States. In 1937, German dive-bombers, flying for the fascist Gen. Francisco Franco in the Spanish Civil War, bombed the defenseless town of Guernica. It wasn't the first time civilians were bombed by planes – the United States claimed that dishonor when it bombed Nicaraguan villages during our Marine action there from 1926 to 1933. But Guernica was the first such bombardment to be worldwide news. (Its destruction was on a scale far larger than any single bombing in Nicaragua.) Nations everywhere decried Germany's barbarity. Then, at the outset of World War II, Germans bombed civilians in Poland and England. In answer, Britain and the United States bombed German and Japanese civilians. Finally, many applauded when the United States atom-bombed Hiroshima and Nagasaki in August 1945 – a quarter of a million people killed in two cities without military targets. Some scientists who developed the bomb urged that it first be dropped in a relatively unpopulated area of Japan as a demonstration, to give the Japanese a chance to surrender; but by then the United States wanted human sacrifices, civilians be damned. Quite a change in the eight years since Guernica.

The progression is clear: Mass bombing of civilians was Hitler's idea, Hitler's values. By 1945, those values had been absorbed by many. Hitler lost his war but won his argument: Massive civilian casualties would be taken for granted from then on. "Collateral damage."

Hitler had dreamed that his Third Reich would last 1,000 years, a perpetual war machine with a society and an economy on permanent war footing. Instead, the United States and the Soviet Union (the two cultures responsible for Hitler's defeat) went on constant war footing, until today the United States government has declared itself to be in a virtually eternal war.

The exchange went both ways: After the war, Germany very quickly became, and remains, one of the most representative democracies in the world – more so, in fact, than the United States, in terms of voter participation and government responsiveness to its citizens. From the German point of view, we won our war and our argument. On both sides values and assumptions were exchanged and absorbed. Not all of them, of course – America and the world reject most of what Nazism stood for. But bombing defenseless countries (Cambodia and Iraq are only two) has become, to the world, an American trademark. That's no small change.

Also through World War II, Japan went from a military hierarchy to a capitalistic corporate republic, while the United States became less democratic and came under the sway of what President Eisenhower was the first to call the "military-industrial complex." Another exchange.

In the so-called Cold War, the police state of the Soviet Union finally fell, but the United States now has a larger percentage of its people in prison than any nation in history, including Stalin's USSR and Mao's China – while Russia and especially China are now growing by leaps and bounds with a more-or-less state-sponsored version of American capitalism.

Even the American Revolution serves as an example. The United States, in throwing off kingship, eventually evolved the most powerful single office in political history: our modern presidency. England, on the other hand, now has only a titular royalty and is ruled by a lively and volatile parliamentary democracy in which its chief executive, the prime minister, is subject to extensive direct questioning by parliament on a regular basis.

Yes, even our Civil War. Now many Southerners are proud to serve in what their ancestors would have derided as the "Yankee army," while modern integration has been fought almost as hard in Boston as in Alabama. Yet before and during the Civil War, Boston was the hotbed of abolitionism.

War is how civilizations make love and multiply, fructify, and become each other. And no one knows at war's outset what one side will absorb from the other.

What then of our present war?

One extraordinary element of 9/11 and its aftermath is that Islamic fundamentalists can only hurt us with our own inventions. We invented the jets that crashed into the twin towers, as we invented the communication and transportation systems that made it possible for so few people to cause so much carnage. The weapons of mass destruction that we fear in the hands of terrorists are our own inventions. Atom bombs, biological and chemical weapons – we invented and/or perfected them. The same is true of the weaponry that's killing our troops in Iraq: rocket-propelled grenades, etc. The cassette tapes that Osama bin Laden and others use to spread hate, the videos these terrorists make for publicity and instruction, the al Jazeera 24-hour-newscasts that are inflaming the Arab world – all are American innovations. In that sense, we fear and fight ourselves – for our technologies are expressions of ourselves. We struggle against what we put out into the world and what we fear most is that what we've created will be unleashed upon us and destroy us, as it did on 9/11. And Islamic fundamentalists who are fighting our technological civilization, and who are rabidly against its innovations, have no choice but to adapt those very innovations to fight us. So, from their point of view, they've already lost. They've taken our innovations into the heart of their lives, and they can't help but be changed by them. As Iran has proved, mass media and electronic technology can't help but undermine fundamentalism.

And what do we absorb from them? Islamic fundamentalists (like fundamentalists of all religions) do not believe in the primacy of individual freedom. What was our first response to 9/11, even before we invaded Afghanistan? The USA PATRIOT Act, which Bush is campaigning hard to renew. That act restricts freedom far more than most Americans are aware. The next substantial innovation, soon after we started fighting in Afghanistan, was the Bush administration's extraordinary claims for its prison in Guantanamo Bay, Cuba (now being argued before the Supreme Court). As David Cole summarized in The New York Times on April 20, "[T]he Bush administration says it can hold ... foreign detainees ... without any legal limitations because they are non-citizens held outside American borders." The precedent that Bush is trying to set is that there can be a place on Earth where a human being has no rights.

If there can be one place, there will be more.

Osama bin Laden would approve. But Bush's claim for Guantanamo goes utterly against the founding document of these United States. In the Declaration of Independence, Thomas Jefferson wrote (and our first Congress signed): "all men are created equal ... endowed by their creator with certain unalienable rights." Not, Bush says, at Guantanamo Bay. To make an exception for any is to imply exceptions for all. So a U.S. citizen, Jose Padilla, arrested and jailed on U.S. soil, is being held without the constitutional due process guaranteed every citizen.

Be careful how you choose your enemy, for you will come to resemble him. The moment you adapt your enemy's methods, your enemy has won. The rest is suffering and historical opera.

Human beings become each other, strangely, compulsively, and often beyond our ability to choose what we become. So with war as with love. We do not love or fight people from whom we want nothing. Our enemies want our power, though even a little of it will change them utterly. Our response: to defend our security with our own political fundamentalism – so we must want more than oil; we want an ideological certainty that matches theirs. Clearly that's Bush's appeal: an unyielding dogmatic certainty. It may change us utterly.