Hangin' with the 'gators in Brazos Bend State Park 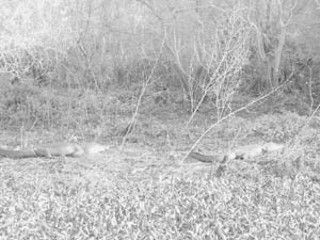 Brazos Bend State Park might be one of the wildest places in Texas. Nature works its magic here even though the park is less than an hour south of Houston.

A visitor to this park doesn't have to hike far from the parking lot to get a sense of being in the jungle. Towering oaks draped in Spanish moss shade the wetlands of the river floodplains. The 21.6 miles of trails pass through tunnels formed by the canopy of vegetation with a chorus of birdcalls all around.

The 1.5-mile hike from the Elm Lake parking lot to the spillway offers the best chance of seeing an alligator. Yes, this park has alligators. And they're loose. "We tell people that the 'gators can go any place they want," says Karen Whitecotton, a ranger at Brazos Bend. The road into the park has a sign that clearly says there are alligators in the park – and poisonous snakes.

In many ways Brazos Bend State Park is not for everyone. The roads and paths offer easy access to a land where pond scum is a good thing. During the summer the mosquitoes will make a pin cushion out of even the toughest hides, and there are many things in the park far worse than the 300 or so 6-feet-long alligators.

What makes the park special is that it offers an increasingly rare look into a world that is inaccessible to most of us. With only one-fifth of the parkland open to the public, the rest of the 4,897 acres are part of a chain of national and state wildlife refuges along the Texas coast.

"This is a nature preserve," Whitecotton says. "We don't interfere any more than we have to. This is [the animals'] home."

Your chances of spotting wildlife in the park are pretty good. Besides the 21 species of reptiles and amphibians in the park, there are 23 kinds of mammals. The 300 kinds of birds range from the white ibis with their long curved beaks and spindly legs fishing in the shallow water to bright red cardinals darting among the trees. There is a list at the ranger station of the different species of butterflies that frequent the park, but you're on your own to identify the 38 different kinds of dragonflies that maneuver just above dark water.

An ecosystem this dense was created by the tallgrass coastal prairies meeting the river bottomland forest where Big Creek empties into the Brazos River. The winding channels have created marshland and shallow lakes that are as inviting to the animals as they are inhospitable to humans. A little time in the park makes a person appreciate what the first settlers must of thought when they rode the riverboats up the Brazos River to San Felipe.

Opened in 1984, Brazos Bend State Park is 20 miles south of Richmond off of U.S. 59 in Fort Bend County. The park provides 70 campsites with electricity and 14 screened shelters. Whitecotton says that spring and fall are the best times to visit. "Summer is our slow season," she says, because of the insects.

The park is also home to the 36-inch Gueymard telescope at the George Observatory, one of the largest telescopes in the U.S. open to the public. Every Saturday night the Houston Museum of Natural Science holds a star party on the observation deck. Noncampers are welcome to visit the three domed telescopes at the observatory, but they are not admitted to the park after 10pm and must leave by 11pm. For more information, call 409/553-3400.

Fishing from the bank is the only water sport allowed in the park. It would be nice if canoeing or kayaking of the creeks and ponds were allowed. It is understandable why they don't offer swimming. The park has never had a deadly incident between the humans and the wildlife and would like to keep it that way.

"The American alligators we have at the park are very nonaggressive," Whitecotton says. Still, "alligator etiquette" is posted all over the park. Most of the pointers give common-sense advice: Do not assume alligators are slow-moving and sluggish, or when an alligator opens its mouth and hisses, you have come too close. The best advice, and maybe the toughest to follow, is to try to be smarter than the alligator.