Catch Stephen out schmoozing for a good cause or two. It's that time of year, folks. The social and fashion seasons are upon us. 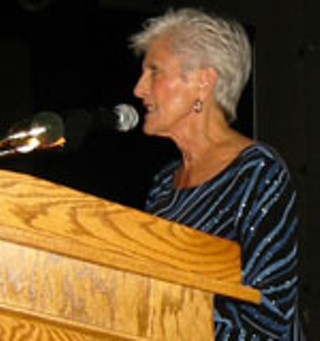 The eloquent and charming ball of fire Bettie Naylor, onstage at the Human Rights Campaign Gala – one of the most beloved activists to grace our local scene

HRC I don't know why I don't just book a suite at the Four Seasons for the entire month of March – year after year, it seems that I wind up there just about every day during the month (just ask the bartenders). Human Rights Campaign's gala last Saturday night was an inspiring evening full of uplifting and entertaining speakers. For me, the highlight (among so many highlights) was seeing my dear friend Bettie Naylor onstage after it was announced that the Austin Equality Award had been renamed the Bettie Naylor Award. The award was bestowed upon David Smith, founder of the Hill Country Ride for AIDS, which raises a small fortune for AIDS service providers. NYPD Blue's Bill Brochtrup spoke of being openly gay in Hollywood; comedian Karen Williams was riveting and had moments of brilliance during her routine, even chiding the event itself as a $250 chicken dinner for primarily white males, saying they should sell chicken by the box and let the people who should be there and can't afford it stand outside the open doors and listen. But this was a fundraiser, part of a series, trying to raise $1 million to secure a matching grant by March 30. The threat of a constitutional amendment banning gay marriage looms like a specter, encroaching on the principles upon which this country was founded, and the HRC is battling it tooth and nail. But a serious cause did not mean there was not fun to be had. I hobnobbed with the charming Andrew Ward of Award Modern (formerly Upcountry); debonair bon vivant and philanthropist Dr. John Hogg (he of the enchanting eyes); my old pal Bryan Ockert of ChaosinAustin.com; dashing international socialite and writer Mark Sullivan and his escort Tim Braun; prominent allergist Dr. Alex Martinez; DJ Sliver; and Cristobal.

"I ain't into faggots. I don't like gay people around me, because I'm not comfortable with what their thoughts are. I'm not prejudiced. ... Women who like women, that's cool. I could actually get into that," said the moronic rapper 50 Cent in an interview with Playboy magazine. Imagine how uncomfortable Fi'ty Cent would be if he knew how really repulsive he is. If I had the unfortunate opportunity to be in Mr. Cent's presence, I know I'd be thinking that this bullet-riddled ex-con street trash is a perfect example of what happens when you make stupid people famous. (Mr. Cent's remarks remind me of a conversation Sister Margaret and I had one night about the fact that if you were to ask a straight guy if he enjoys viewing two men having sex with each other, he'll invariably protest vociferously. But if you ask him if he enjoys seeing two women having sex with each other, he, along with most straight guys, will heartily endorse the idea. "So," said Sister Margaret, "it would be accurate to say the majority of straight guys enjoy viewing homosexual activity. Case closed.")

Tonight, Thursday, March 25, 7pm, at Laguna Gloria, Fashion Central presents the Year of the Monkey Fashion Show, featuring clothes, accessories and styling by Central-area boutiques and salons, including Shiki, Adelante, Fabby Darling, Wardrobe, Capra & Cavelli, Casa Loco, 365 Ways 365 Days, Avant, Innu, Sage, and Daya. Tickets are $10 general, $30 VIP, available at all participating establishments. Call Shiki at 371-7767 for further info. On Monday, March 29, 7pm, the Paul Mitchell Academy at Austin presents Fashion for a Cause at Club DeVille. With each hair design student creating his or her own look on a model, and music by DJ 4Eleven, the proceeds will go to the Leeza Gibbons Memory Foundation Alzheimer's disease fund and the Andrew Gomez Dream Foundation. Presale tickets are $7 (available at the school) and $10 the day of the show. For more info call 251-1644. Sunday, April 4, 8pm, is the third annual Style Cup, a benefit for Project Transitions, at Element nightclub (Fifth & Lavaca). It is one of my favorite fashion events in which salons compete against each other in several categories of styling. Participants include Avant, Catena's, Daya, Dezire, Fashionista, Innu, Maximum FX, Premier Atelier, Salon Bali, Transformation Salon, and the Paul Mitchell Academy. Tickets are $20 general admission and $40 VIP, which includes free champagne and hors d'oeuvres, balcony viewing of the event, a complimentary cigar or corsage, and a gift bag of beauty products, and can be purchased at any participating salon or through Project Transitions, 454-8646.
More After a Fashion columns