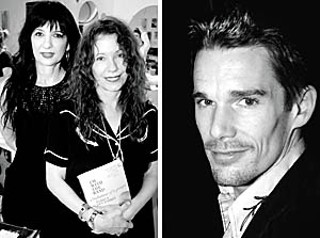 left: Pink Salon's Deborah Carter (l) played hostess to the glamourous Mme. Pamela Des Barres (r) at a booksigning held there; right: The completely approachable, and relaxed Ethan Hawke at last week's Texas Film Hall of Fame where he was honored for his film achievements before disappearing into the night with a bevy of lovely blonde women.

HOLDING COURT I had a charming chat with the amazing B-52's in the lobby of the Omni before their show at Stubb's Thursday night, with the always-stylish Kate Pierson holding court and telling me how much they enjoy playing Austin. Naturally, that was my cue to gush about how much we enjoy having them here. But I had to cut the gushing short and bid them adieu to race out to the airport to pick up one of my very favorite stars, the delicious Pamela Des Barres. Her allure is inescapable, even attracting the attention of a lowrider on Highway 71 who made his garishly painted truck do ridiculous tricks at a stoplight while gazing ardently at milady. We tried desperately to hide our laughter for fear of retribution, and raced to Pamela's hotel. She is here to attend her pal Polly Parsons' (daughter of Gram Parsons) Friday showcase at Maria's Taco X-press, and also held a booksigning of rare editions of her eye-popping, jaw-dropping memoir, I'm With the Band, at Pink Salon last night. Radiant with her trademark fiery tresses, she held court among adoring fans who scooped up books and other memorabilia from their idol.

BRUNCHING The BMI brunch on the lawn of the Four Seasons was a lovely and gracious affair – good food and my favorite Four Seasons bartender, Brian, in attendance ensured a good time. (He attends so many of the same parties I do, just on the other side of the bar.) 'Twas a bit sticky though, with the heat and the rain; Miss Kitty and I commiserated about how quickly our new 'dos were melting in the humidity. KGSR's Kevin Connor, whose 'do was not melting, said we had just missed a dynamite show of bold-faced names that included Willie Nelson and Kris Kristofferson. It seemed like every time I turned around, the talk was about the illegal downloading of music. I overheard one conversation about the blatantly manipulative and simplistic commercials showing how movie piracy affects everyone in the industry, and how even the lowly grips and customers are affected by it. "What they're not showing," the conversation went, "is the executives with the multimillion dollar homes and private jets complaining how it affects them – because it doesn't affect them. They'll always get rich, while passing on any losses to the underlings." The possibilities came brimming forth: a commercial with Stephen Spielberg sitting at a crowded airport gate weeping because he now has to fly coach because of piracy? Or Tom Hanks tugging at our heartstrings because he now only gets $23 million per movie instead of $25 million because of piracy. Or perhaps a commercial with Madonna holding her crying children, telling us how we're taking food out of their mouths every time we download a song of hers. Said Conversationalist No. 1, "Then I might be swayed by the tears of the film and music industries." Said Conversationalist No. 2, "Frankly, I don't care whether Robbie Williams makes $13 million or $14 million this year." You can bet BMI has a very different outlook on the matter.

TOMORROW Saturday, March 20, the Hotel San José (1300 S. Congress, 444-3800) presents SXSJ, including the fabulous and sexy Tina Schlieske at 4pm, Raul Malo (of the Mavericks) at 6pm, Gerry Van King ("the King of Sixth Street") playing at 7pm, followed by the premiere of The Last Days of the San José, a film by San Ho's Liz Lambert at 7:30. Also, Floribunda Plantworks (2041 South Lamar, behind Flashback) will be hosting a fashion show by Jezebel and Upstairs benefiting Last Chance Forever bird of prey conservancy. A live bird demonstration at 5pm will be followed by a runway show with DJ Manny spinning and the Amazing Letdowns playing a live set at 8pm. Tickets are $5 for the birds of prey show; $10 for the style show; and $15 for both, available at Jezebel, Upstairs, and Floribunda. Kids free. And my favorite part: No small dogs are allowed for the birds of prey show as they may be consumed. Call 851-2000 for more details. Also from 7pm-midnight, Lucky Lounge has the Women in Rock showcase, with radio and television personality Miss Kitty doing live feeds for Austin Music Network.