Is Stephen your style avatar or Eddie Izzard? Who was that man behind the shades at the Texas Film Hall of Fame? 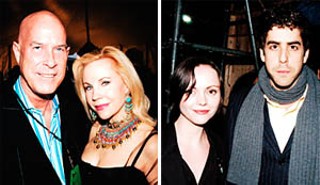 left: My new best friends, the dashing Angus Wynne III (his father, Angus Wynne II, founded the profitable Six Flags Over Texas) and the beautiful Carolyn Farb, a social and fundraising icon who is graciousness personified and smart as a whip; right: Christina Ricci, sans barbecue sauce ("What?" my still goth friend Neil moaned. "Why didn't you introduce me to her? She's a goth icon!"), and actor/director Adam Goldberg, both of whom will be making the SXSW scene (Photo By bobshermanart.com)

STARS OVER TEXAS "The stars at night are big and bright, deep in the heart of Texas." Truer words were never spoken (or sung). Last Friday's fourth annual Texas Film Hall of Fame at Austin Studios was one more dazzling success for the Austin Film Society. Even the drippy weather could not put a damper on the excitement of 700 guests who turned out to see Texans and contributors to Texan film culture honored for their achievements. I heard it referred to as Austin's Oscars, which has a nice ring to it and isn't too far off base. But what it really was, was a gossip columnist's wet dream. The bright lights of the media were outshone on the red carpet by the arrival of the stars, who, one by one, graciously made their way past adoring fans. I had the good fortune of visiting with them all backstage. Dennis Hopper is awe-inspiring. Smooth and elegant and burning with intensity, he wanted to make sure that no one saw him sign my photos of him for fear of starting an ugly trend; Robert Duvall, what a nice guy he is. Dignified and sonorous, he is also warm and wickedly funny. Judith Ivey is deeply talented and as sweet and spicy as good barbecue. I was dying to take her into the hair and make-up room and put her into Deborah Carter's oh-so-capable hands ... but then again she was with Treat Williams, whom I have adored ever since he was the lovable hippie in Hair. I was tongue-tied and genuinely honored to meet him. Forest Whitaker seemed to be very touched by the honor bestowed upon him, and his presence is as powerful in person as it is onscreen. I asked Ethan Hawke, who was very sweetly escorted by his grandfather, what he'd like to do after the awards, and he confided that he'd like to put grandfather to bed and go have a few drinks. Fortunately I was able to make sure he got the invitation he needed. Ali MacGraw has immense personal style and introduced herself to everyone – sort of a touching move, since everyone was well aware of whom she was. We chatted pleasantly about her stunning silver accessories, and I kept thinking, "Where do I begin to tell a story of how great a love can be ..." Christina Ricci is divine – smart, funny, and riding high. She was enchanting and engaging, wailing to me, "Omigod, the waiter dumped barbecue sauce down my Chanel dress and didn't even know it! He just kept on walking!" Chanel. My kind of gal, indeed. She's here for SXSW with her multitalented beau, Adam Goldberg (who shares the same birthday as Pablo Picasso and I). Other luminaries in attendance included the indomitable Liz Carpenter, the glamorous and glorious Dr. Carolyn Farb, and the wild and wicked Angus Wynne III, who told me, "You look like Eddie Izzard." Fortunately, I like Eddie Izzard, and I think Angus looks like Ian McKellan, whom I also like. I rode with Carolyn in her limo to AFS board member and Liberty Bank CEO Eddie Safady's party at his to-die-for home. Epitomizing urban chic, it is the only private home on Congress. There, the stars mingled with AFS and TFHOF associates, and I stayed so late with Rebecca Campbell and her husband, Andy, that Eddie practically had to throw us out at 2am.

TOMORROW Thursday, March 18, 4-6:30pm, FactoryPeople (1325 S. Congress), the official Spin magazine lounge for SXSW, presents DJ FuckySuk (aka Jason Reece from Trail of Dead) with margaritas served by the fabulous Boom Chica Boom Go Go Girls. Thursday is also the BMI showcase at the Austin Music Hall, featuring the legendary Little Richard. In other local fashion news, Thursday, March 25, is Fashion Central's Year of the Monkey fashion show; call Shiki at 371-7767 for more info. Also, Sunday, April 4, is the third annual Style Cup – one of my favorite fashion events in which salons compete against each other in several categories of styling. We'll keep you posted.