Our Style Avatar arches his well-coifed eyebrow at local eyebrows, wonders why Britney can get drunk and married and he can't, and solicits … errrrrrr … polls local teens 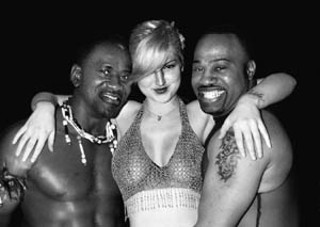 From ArtErotica 2003, the beautiful Amber Morton, daughter of Toni Price, shows off how she earned her reputation as one of the wildest women in town. (Photo By bobshermanart.com)

EIGHT ARMS TO HOLD YOU How incredibly fortunate Austin is to have an organization like the Octopus Club. As a charitable fundraising committee for AIDS Services of Austin, they present an art show and auction to raise funds for those living with HIV/AIDS. Last year's event was a jaw-dropping, eye-popping riot of a party loaded with fabulous outfits and beautiful people. Held at the Blue Genie Art Industries, this year's ArtErotica will be Saturday, Feb. 21, 9pm-12mid. Advance tickets to ArtErotica are available for $25 at Alien Records, Lobo Bookstore, and directly from AIDS Services of Austin (7215 Cameron, 406-6157). Every penny spent at the event will go directly to ASA's Paul Kirby Fund, which is their AIDS emergency assistance fund. To donate art, become a host, or volunteer, or simply for more information about ArtErotica, visit www.octopusclub.org or call 496-2465.

It's time for another fabulous Wilde Party at Zach Scott. Supporting gay and lesbian youth, the Wilde Party will feature hosts Bettie Naylor, Brenda Thompson, and Ted Smith for a reception and a performance of Always ... Patsy Cline, the hit musical featuring dozens of songs made famous by the legendary icon of country music. The fun starts at 6:30pm with refreshments at Zach's Arena Stage (1510 Toomey), followed by the show at 8pm on the Kleberg Stage. A special Wilde Party block of tickets is being held for this performance. Call 476-0541 x1 to purchase your tickets now ... and if you can't come to the play, please come to the reception anyway. For more information on the show, go to www.zachscott.com/on_our_stage/patsy.html.

SEXPERTISE I liked the headline I read: "More teens saying no to sex, experts say." It made me wonder exactly who these "experts" were. Astonished by this research, I decided to investigate the matter myself. Choosing a rust-colored jumpsuit, white patent leather mules, and safety goggles, I stood outside in the parking lot at the mall and out of deep concern for the youth of today, asked every teenager who passed by if they wanted to have sex. Every single one of them declined the opportunity. So, indeed, I'd have to agree with the "sexperts" that teenagers are definitely saying no to sex.

THE HIGHBROW EYEBROW We've talked about this before, but it's time for a little refresher: Few things in life are more important than the eyebrows. They speak for us, they frame us, they accentuate our feelings ... and they're a virtual canvas for self-expression. They are, perhaps, the most deeply important fashion accessories. Personally, I prefer to keep mine tinted, trimmed, and waxed (I always recommend Cristobal at Bella Salon or Vickmay at Vickmay Skin & Body), so they say exactly what I want them to. But I don't require that everyone go through all that – everyone is free to sport whatever eyebrows they choose (thank God, though, that eyebrow rings are now ridiculously passé). After my recent spate of holiday shopping, I was appalled by the state of the eyebrow in Austin. And it wasn't just the malls, either – where one expects to see horrid eyebrows – but at some of the best parties and nicest stores. Had there been a reversal of eyebrow etiquette that I was unaware of? It's not that these were slovenly eyebrows, they were just so peculiarly shaped. The most common eyebrow "don't" that I saw was the golf club eyebrow – you know what it looks like, the name says it all. Similar, but more disproportionate, is the little dipper eyebrow – too heavy at the end, with more of an arch to it ... but not nearly as much as the big dipper eyebrow, whose nightmarish proportions you can only imagine. There was the ever-present apostrophe eyebrow, which, well ... you know. One of my favorite new developments is the checkmark eyebrow – a long, attenuated line arching from the temple to near the nose where it terminates in a little divot. There are people who actually make their eyebrows look like that. We also noticed a resurgence of the sperm eyebrow – long-popular with ladies of a certain age, it also seems popular among the Britney Spears set, who don't seem to know any better. In the midst of such eyebrow anarchy, it's easy to become confused and disoriented, but together we can work through it. Now, let's start by booking an appointment with a professional ... and you can e-mail me 24 hours a day with your eyebrow concerns and fears! I am here for you.

QUOTE UNQUOTE From gossip icon Michael Musto: "First off, Britney Spears' nutty marriage stunt showed the absurdity of the right-wing's clinging to the supposed sanctity of the marital institution, which allows inebriated jokesters the right to wed for a weekend goof, while devoted same-sexers who've been together for decades can't cement it for the remainder of a lifetime!" Bravo, Michael! My sentiments exactly.