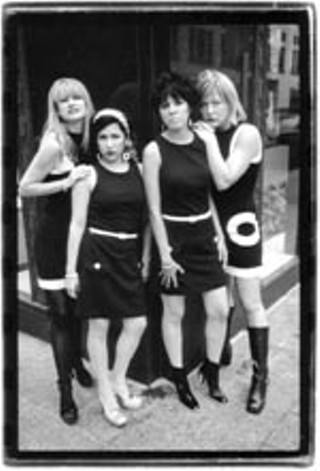 l-r: Junie Tune, Gigi Bada Bing, Laurie Libido, and Sweet Georgia Bram, aka the Platforms. They may look like nice girls, but the music says, "I wanna be baaad …"

"ARE YA READY, BOOTS? START WALKIN'" Who could resist such flattery? There it was in black and white: She called me, "Your Fabulousness" and gave me a personal invitation to the debut of her band, the Platforms -- to whom I apparently, unbeknownst to me, contributed in a large way. Evidently, attorney/guitarist June Higgins (aka Junie Tune) needed a recommendation for a salon, and I sent her to Pink on the chic SoCo Strip. It was there that she met stylist Georgia Bramhall (aka Sweet Georgia Bram ... yes, of the Bramhall musical dynasty), who was to become bassist for the band that Higgins had started in 2002 with former Chronicle intern Laurie Gallardo (aka Laurie Libido) on vocals. Along with photographer and former ballet dancer Gina Lopez (aka Gigi Bada Bing) on drums, they are called the Platforms -- once playfully described as Josie & the Pussycats meet Kiss. The Platforms mix noisy but melodic rock with a flair for vintage Sixties and Seventies fashion and, of course, fabulous shoes. They swear they're not just about the clothes and shoes, but they did sport hot pink silk satin Gucci pants and platform shoes by St. Laurent and Prada at their debut, opening for Mark Hutchins' Rockland Eagles at the Hole in the Wall. They also rocked the roof down by playing original songs such as "Sue's Blue Shoes," "Vespa Girl," and their signature song, "Bang Me," along with a searing version of Nancy Sinatra's "These Boots Are Made for Walkin'." The band's next gig is Saturday, Jan. 24, at Flamingo Cantina with the Charter Bulldogs, American Idles, and the Ugly Beats. Who knows what those bands will be wearing, but you can bet the Platforms will look totally divoon. Go for the fashion; stay for the music.

FASHION IN FILM In our continuing series on wonderful clothes in the movies, there's Eyes of Laura Mars (1978) with the fabulous Faye Dunaway as a fashionable fashion photographer, Laura Mars, who develops the ability to "see" a murder before it happens. While she never gets to "see" them in time to stop them, she gallivants through the movie in a drop-dead stylish wardrobe designed for her by the formidable Theoni V. Aldredge, who won Best Costumes from the Academy of Science Fiction, Fantasy & Horror Films for her work on Eyes (Aldredge also created Faye's fabulously chic Seventies look in Network the year before and had previously won the Oscar for The Great Gatsby costumes). Paneled skirts, below the knee, in luxurious wool, worn with thick knee-high boots with silk blouses and wraps, mantles and capes, the clothes dispel any vision of hideousness in Seventies fashion. Since Dunaway plays a fashion photographer, we are treated to two glorious fashion shoots that are momentous because they are so purely Seventies. In the first shoot, Mars choreographs a scene in which Lisa Taylor (a Seventies supermodel, before the term was ever coined) and Darlanne Fluegel, clad in nothing but lingerie and fur coats, duke it out in a catfight in front of a fiery car accident in Columbus Circle. The second one is disco deluxe, with sinewy models in stilettos, harem pants, and lip gloss cavorting by a pool while a male model in a tuxedo lies "dead" from a gunshot wound, as the Michael Zager Band shrieks "Let's All Chant." I especially like the part when Mars runs shrieking down the length of her studio on the piers. She starts off the chase wearing red pumps with her outfit, then she appears to be wearing black high-top tennis shoes, and finally ends the chase back in the red pumps again. Amazing. The murky plot has something to do with society's glorification of violence and sex, but the plot takes a backseat to the look of the movie. The interiors are to die for -- Mars' apartment is minimalistly magnificent, with indirect lighting, opulent fabrics in earth tones, and an enormous platform bed -- and the soundtrack is a disco period piece. To underscore the pure Seventies-ness, Barbra Streisand sings the main theme, but mercifully does not appear, though we are treated to early performances by Tommy Lee Jones and Raul Julia.

THE BEAUTY BUZZ On Saturday, Jan. 17, noon-3pm, Blackmail (1202 S. Congress) will host a trunk show of bath and body products from NYAKIO. Developed by Nyakio Kamoche, a first-generation American, NYAKIO was inspired by family beauty secrets passed down through her Kenyan heritage. All derived from natural ingredients, featured products include Grapefruit Tarragon Body Crème, Citrus Moluccana Oil-Based Body Wash, and Kenyan Coffee & Sugar Body Scrub, as well as bath serums and candles. Actresses and models such as Selma Blair, Hilary Swank, and Amber Valetta swear by NYAKIO products that are sold at shops around the country including the swank Fred Segal on Melrose, and Jeffrey in NYC.