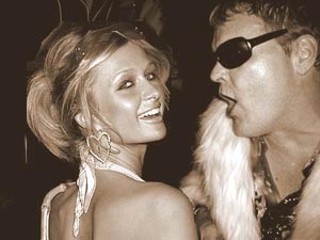 2) The Phenomenon Known as Bennifer With hunting rifles and pickup trucks, movie stars transform themselves into rednecks. The world snickers.

3) The War in Iraq With bad intentions and too much testosterone, a ham-handed search for Weapons of Mass Destruction transforms itself into an ongoing bloodbath. The world is stunned.

4) Queer Eye for the Straight Guy With paint rollers, highlights, a Saarinen chair, a sauce pan, and elocution lessons, the Fab Five transform dreary guys into studly sophisticates. The world tunes in.

5) Michael Jackson's Arrest With alarming naiveté and a short memory, Jackson again makes himself a sitting duck for charges of pedophilia. The world tries not to look.

6) The Return of the Eighties With mullets, Taboo, and rubber bracelets, an era of drug-addled excess transforms itself into mall-level chic for a generation that has no memories of the original. The world cringes.

7) Paul Burrell, Princess Diana's Talking Butler With prurient gossip and a cash register where his heart should be, a previously seen-but-never-heard servant transforms himself into a royal Chatty Cathy. The world yawns.

8) The Closing of FAO Schwarz The pantheon of childhood fantasies is a natural casualty as the nation allows itself to be transformed into a coast-to-coast Wal-Mart. The world shudders.

9) An Academy Award for Eminem With self-consciousness and misdirected sentiment, an organization desperately trying to get cool transforms itself into a bastion of lapsed judgment. The world is appalled.

10) Liza & David's Wedding How creepy was that?

1) The Third Annual Texas Film Hall of Fame With its sheer star power and ability to bring together some of the finest contributors to Texan culture, this event is poised to put every other local event to shame and bring major attention to Austin in a way it never had before.

2) The Opening of Anthony Nak Simply amazing. Gorgeous world-class jewels showcased in a drop-dead fabulous setting by architect M.J. Neal. After bejeweling some of the world's most beautiful women, the boys themselves are the stars.

3) Catherine Swanson Designs Debut in New York With an open checkbook and stars in her eyes, Miss Swanson shows her very first collection in the tents at Bryant Park during Fashion Week, the pinnacle of showcases in America. She returns to Austin and opens her atelier, ready to fill orders.

4) Frost Bank Building Love it or loathe it, it's here to stay. Get used to it. It is now the pre-eminent monolith on our cityscape. Some say it looks like a large electric nose-hair trimmer, some say its Austin's Chrysler Building. In either case, nothing says "big city" quite like tall buildings.

5) Blackmail Fall/Winter 2003-04 Fashion Show Madame does it in a way never seen before in Austin. Chic and soigné, it was a glimpse into the history of couture, as well as a sleek look into the future.

7) Factory People Bringing an urban-downtown presence to the chic SoCo strip, the ultrastylish décor and unusual merchandise turns the old Just Guns space into something rather daring and very New York.

8) Summer Lawson's Fall/Winter Collection Almost unimaginable dreaminess in extravagant gowns and styling foretell a glorious future for this virtually untrained designer. Though the work is not widely available, it is magnificent and can be seen at www.sirensummer.com/subkult.

9) Nordstrom Though some have called it Dillard's with a piano, Nordstrom brings to Austin the cachet of high-end retail, and designer collections previously unavailable here. And world-class service.

10) Austin's Magazine Madness 2003 saw the death of Push, Urbanscape, and In, and the birth of Brilliant, Cityfold, and Jewell. Holding their own at this time are FeedBack, Tribeza, and Austin Monthly. What surprises 2004 holds remain to be seen.

Oops! The following correction ran in our April 2, 2004 issue: Our report of the death of local magazine Urbanscape in Stephen Moser's "After a Fashion" column [Top 10 Local Style-Related Developments of 2003, Jan. 2] appears to have been exaggerated. We are told the magazine is alive and well, and indeed its International Issue is currently in circulation. See www.urbanscape.com for more information.
More After a Fashion columns