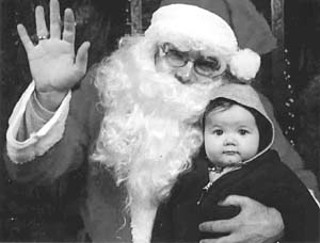 COMING RIGHT UP Saturday, Dec. 6, noon-8pm, Big Red Sun (1102 E. Cesar Chavez, 480-0688) presents Santa in the Garden, a holiday benefit for Project Transitions. With music, photos with Santa, pony rides, a Mrs. Claus costume contest, and a variety of family fun, BRS always does a great job on its events. For more info and a printable registration form, go to www.bigredsun.com... Also Saturday, Dec. 6, is First Saturday, during which a number of galleries present special events (to see a list of participating galleries and for more information go to www.inthegalleriesaustin.com). At 3pm, Davis Gallery (837 W. 12th, 477-4929) will host a gallery talk with photographer Brian Bowers and Sodalitas, an Austin-based trio of artists. All four will be in the gallery to discuss their work and answer questions.

We swept through the hangar at the old airport to join the festivities for the Austin Studios Third Anniversary Party. With abundant Mexican food and at least 1,000 boxes of Krispy Kreme Doughnuts, the party brought together local film fans, Austin Film Society staff, board members, and society members on the spacious soundstage. The studios are an important addition to the Austin film industry and such a great accomplishment for the AFS... Pink Salon owner Deborah Carter's birthday party was jam-packed with luminaries from Austin's beauty, fashion, and art scenes, and the gifts were piled as high as the food on the table. Her legion of followers is diverse and devoted.

SCHOOL FOR SCANDAL What's the hardest stain to get out of little boys' underwear? Michael Jackson's make-up. Poor Michael, in his infantile la-la-land, he just doesn't seem to think that having sex with children is a crime. I love the conspiracy theorists that point out how interesting it is that these scandals break just as Jackson is about to debut a new album or video. Even the talented but been-through-the-mill Rick James joined the fray by stating that authorities were after Michael "because he's black, he's rich, and he's famous, and they got nothing else better to do." He added, "Look, Michael loves children, OK? I mean, I look at it like this: I mean, all this pedophile crap, you know, why didn't they go after Elvis Presley? He was the biggest pedophile of all. He had Priscilla when she was 14, 15. Why didn't they go after Jerry Lee Lewis? He's the second biggest pedophile of all. He married his first cousin. She was 13 years old." Interesting point by Rick, who then loses all credibility by saying, "Why don't they go after Santa Claus? Why don't they do psychology references on him? They don't know who he is. He's in 100,000 different cities, and kids sit on his lap, telling him what they want for Christmas." Uh, Rick? I have some very bad news for you. (In an unrelated but similarly appalling statement, singer R. Kelly, himself an accused sex offender, said, "[People] can criticize you without even knowing you, and hate you when they don't even know you. ... Osama bin Laden is the only one who knows exactly what I'm going through." Please.) I especially liked Michael's mug shot with his eyes wide open, looking eerily similar to his friend and promoter David Gest. Gest, who also resembles a bloated Pee-wee Herman, is currently embarrassing himself in the very public breakup of his twisted marriage to Liza Minnelli, and is said to be currently dating alleged extortionist Chandi Hefner. Hefner (no relation to Hugh), whom you may (or may not) recall, became companion to eccentric million-heiress Doris Duke, as Duke's physical and mental health began to decline. Duke was convinced that Hefner was the reincarnation of her dead daughter, and Hefner apparently did nothing to dissuade her of the idea. She was accused of being in a conspiracy with Bernard Lafferty, the cross-dressing alcoholic butler, to hasten Duke's death so that Lafferty and Hefner would inherit a fortune. Duke passed away in a timely fashion, and the scoundrels did indeed inherit a fortune. Honestly, with credentials like that, I think Chandi Hefner sounds like a faaabulous match for David Gest. Keep your seatbelts fastened -- we'll be checking into the scandal-ridden Paris Hilton next week.

CONFIDENTIAL TO N.W.A.W.R. Your words were harsh and a bit inaccurate, but your compliments were high. Overall, I have to say I agree with you. It's impossible to be all things to all people all the time, but thank you for your concern. Stay tuned.